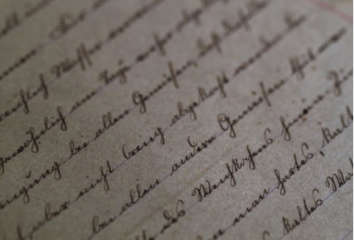 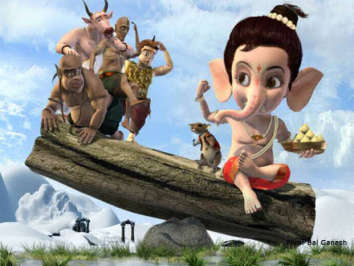 Ganesha- Our all Time favorite

Ganesha – the all time favoriteLord Ganesha, one of the most famous and favorite among all especially the kids. Do we really know about him? He's just famous as the elephant headedGod with a big belly who is usually found playing around everywhere with hisbest friend the Mouse and eating his favorite food Modak. There are someincidents through which Ganesha proved himself one among the others.Goddess Parvati, wife of Lord Shiva was supposed to go for bath and she wasalone as Shiva was busy meditating on the mountains. She wanted someone toguard her door when she goes and it was only Nandi (Shiva's bull) who could doit. She told Nandi to guard the door and let no one enter till she asks him. Nandidid accept her orders, but he being loyal to Shiva let's him enter inside with whichParvati gets very angry thinking of no one being loyal to her, takes off herturmeric paste applied on her body and makes an idol of a boy and then puts lifeto him and names him Ganesha and declares him to be her own son who wouldbe loyal to her always. Every time she wished to bathe she instructed Ganeshato guard her door and not let anyone enter.One day when he was guarding the door, Shiva happened to come and justrushed inside, but at his surprise, he found a strange boy guarding the door andstopping him to enter in. On asking him who he was and why was he stoppinghim to enter his own house, Ganesha introduces him to be Parvati's son andinforms him, thus, as per her orders he would not allow him to enter. Shiva,furiously warns him to let him go or else he would have to battle with him.Ganesha denies to let him enter and so Shiva asks his army to attack him, butGanesha very bravely rebelled them. Shiva had realized that he was not anordinary boy and thus decided to himself fight with Ganesha and with his divinefury his trishul poking his head cut on the ground and killed him instantly.When Parvati came out after her bath and saw Ganesha lying down, ran towardshim and had found herself extremely hurt and insulted that, she wanted todestroy the whole creation. But, Brahma, being the creator appeared suddenly atthe spot to know what had happened and pleaded her to take back her words.She furiously denied to change her decisions and narrated them the whole case.Shiva apologized for his mistake and tried to keep her cool and decided to getthe head of any first living being they find and would place it on Ganesha's head.So, he ordered Brahma to move towards the north direction and get any head hefinds.In a short time Brahma returns back with a strong big head of an elephantand hands it over to Shiva. Looking at that Parvati was very annoyed thinking- “aboy with an elephant head” and so denied to accept it. But, Shiva explained herthat though he would be an elephant headed, he would not be an ordinary boy,but would be worshiped before all the other Gods. He places the head on thebody and gives him life and declares him to be his own elder son and named himGanapati (leader of the beings)As time passed, Ganesha started growing and with many such incidentsthere was one of the most famous incidents when Ganesha and his youngerbrother Karthik were discriminated and and were tested who was wiser amongthe both. The Devas had insisted to test their qualities and intelligence and so allof them decided to go to Brahma being the creator of the universe would cleartheir doubt. On asking him, he too was speechless that who wiser among theboth. So he decided to send his mischievous son Narada to clear the doubt.Narada, who was always prompt with his pranks had a wonderful plan to testthem so he reached to the divine couple Shiva and Parvati with a magical fruitand insisted them to give it to the one whom they liked the most. They were bothconfused to whom to give it. At the same time Ganesha and Karthik reachedthere and insisted to have the fruit. Shiva and Parvati then decided to organize atest between them. They in the center and all the other gods and goddessessurrounded by them. Ganesha and Karthik in the middle were all prepared for thetest. Karthik was confident enough to win it, as he was a fit and fine. Well,Ganesha was stout and with a big belly who could hardly move from his placefast. Ganesha was very cool and was least concerned about what was going tohappen. They then announced that either of them who goes around the wholeworld thrice and reaches back to them first would get the magical fruit. Karthik,very spontaneously moved on with his peacock and Ganesha puzzled, thinkinghow he would manage as he was too stout and his mouse too small to cope upKarthik, so very wisely Ganesha joined his hands and started moving around hisparents Shiva and Parvati three times. Surprisingly, when he was asked for thereason, he replied, “You have created me, and thus, for me you are the world.So, i don't find it worth wasting my time moving anywhere else” and hecompleted his task very efficiently. Not only Shiva and Parvati but, all presentthere, were very impressed by his wise act and gave him the fruit and cheeredfor him.Thus, Ganesha has been given the dominion over all the Ganas, whichmeans all the classes- be it Gods, humans, insects, animals or celestial beings. Itis said that we have to respect and honor all these Ganas and if do not do so, allour actions are known as the form of thievery as they are not sanctioned. So,instead of preaching each Gana differently, in order to receive the blessings, itwas decided to bow the Lord of all, Shri Ganesha (which means God of allGanas) By receiving his grace, we receive it from all and he removes all thepotential obstacles and helps us to succeed.

A fight in the washroom with my best friend