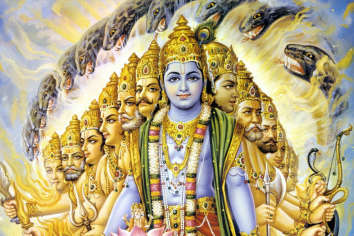 Godly Delights - In Gita Verse 9.21 When they have thus enjoyed vast heavenly sense pleasure and the results of their pious activities are exhausted, they return to this mortal planet again. Thus those who seek sense enjoyment by adhering to the principles of the three Vedas achieve only repeated birth and death.Krishna warns us while enjoying godly delights, if you become unconscious you will be then again create hell for you.Hell is not part of geography, it is part of your psychology, and so is heaven. You create your hell, you create your heaven. And it is not in the future. Herenow somebody is living in heaven and somebody is living in hell &ndash; and they may be sitting together, they may be friends. Don&rsquo;t be worried about hell and heaven; they are just your states. If you live in the mind, you live in hell. If you live in the no-mind, you live in heaven.In my Bhagavad Gita Verse 6.35, blog I wrote - Right awareness means not only awareness &ndash; because awareness can become a strain &ndash; right awareness means awareness without any strain, relaxed.What Kabir and Osho says A New Synthesis Is Needed: Awareness with Spontaneity while enjoying godly delights.To become a sadhu, the first thing is: don&rsquo;t claim knowledge because all knowledge is illusory. You don&rsquo;t exactly know what the case is, nobody knows. Only ignorant people think they know; the wise people know that they don&rsquo;t know.The second thing: the sadhu will be like a child, he will move with spontaneity. When he is hungry, he will eat; when he is sleepy, he will fall asleep. Have you not seen small children? &ndash; even sitting at a dining table, they fall asleep. They are just eating &ndash; a bite in the mouth, and the child has fallen asleep.The second thing about a sadhu will be his spontaneity. But you will not find spontaneity in the so-called sadhus. When they are feeling hungry they are fasting; how can they be innocent and how can they be spontaneous? And when they are feeling sleepy they are keeping a vigilance, they are forcing themselves to remain alert. When they are feeling angry they are trying to smile, and when they are feeling sexual they are talking about brahmacharya and celibacy. These people cannot be sadhus &ndash; not according to Kabir, not according to Osho.The sadhu has to be innocent like a small child. Yes, Jesus&rsquo; definition is right when he says: &ldquo;Only those who are like small children will be able to enter into the kingdom of my God.&rdquo; He is talking about sadhus &ndash; like small children. But one distinction has to be made: when I say like small children, or when Jesus says like small children, he does not mean childish; he means innocent, yet mature. Innocence has its own kind of maturity: a ripeness of innocence, when innocence has flowered.What is the difference between a childish person and a person who is like a child? The difference is the childish person has no awareness at all. Yes, he&rsquo;s innocent: when he feels hungry he feels hungry and he eats; and when he feels sleepy he sleeps &ndash; but his spontaneity has a deep background of unconsciousness. The spontaneity is there, but it is unconscious.When the spontaneity is there and in the background of consciousness is awareness; when the awareness is there and still you don&rsquo;t interfere with the spontaneous&hellip; You are so disciplined in your consciousness that you don&rsquo;t create any unnatural discipline for yourself; your awareness helps you to be natural, to be spontaneous, non-interfering, non-repressive, but yet you are aware.These two things have to be understood. There are people who are unconscious and innocent; they are childish. They will not enter the kingdom of God, they are not sadhus. Then there are people who are conscious and have become unnatural; because of their consciousness they have started interfering with their natural life. These people are so-called monks, sadhus; they are also not ready for the kingdom of God.&nbsp;A new combination, a new synthesis is needed: awareness with spontaneity. That is what Kabir means when he says sahaj samadhi. Sahaj means spontaneity, samadhi means awareness: spontaneous awareness. If awareness interferes with your spontaneity, you have missed. If your spontaneity goes against awareness, you have missed. A sadhu is one who is both together: sahajai kaya sadho.Says Kabir: O sadhu! Purify your body in the simple, natural, spontaneous way. Don&rsquo;t fight with the body &ndash; that is the message. The body is yours, the body is you; don&rsquo;t create any enmity with the body. The Christians, the Hindus, the Mohammedans, the Jainas have all been fighting with the body. Somehow, a very wrong notion has become very prevalent: that the body is the obstacle toward God. It is not so, not at all!The body has nothing to do with it. The body is a vehicle: if you want to use the vehicle to go to hell, it will take you to hell; if you want to go to heaven, it will take you to heaven. The vehicle is simply available, wherever you want to go. If you want to go outside, it will take you outside; if you want to go inward, it will take you inward. The vehicle is just a vehicle; it is tremendously beautiful, tremendously cooperative. The body is so cooperative that even when you start destroying the body it cooperates. You can take a whip and whip yourself, and your hand will be cooperating. Look at the tremendous cooperation: you can whip your body with your own hands; you can drink poison with your own hands and with your own mouth, and the body will cooperate. Its cooperation is unconditional.Krishna tells if you become sahaj, then you will be able to enjoy godly delights and also remain aware and self-alert.