If someone tells you about a tilt-shift lens , you will almost automatically think of the delicious “mock-up effect”  that flooded the photo pages some time ago. In these photographs, the depth of field seems to play tricks on us to highlight a more or less distant subject and if in addition the shot was taken from a low angle, we quite simply have the impression of observing a model. Although it is possible to "simulate" this mock-up effect using editing software, you will get the most satisfactory results using a tilt-shift lens.

This type of lens, also called tilt and shift lens, is also very popular for architectural photography, landscapes and other subjects that we will develop above but before starting the technical explanations, a little point theory is needed… what is a tilt-shift lens? 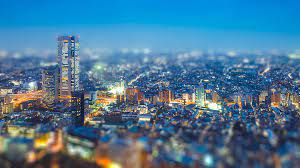 What is a tilt-shift lens?

A tilt-shift is a lens whose optical part is capable of tilting and moving relative to the sensitive surface (in the plane of the sensor). This property will allow you to correct or improve the perspective in your photos, in other words the vanishing lines but also the depth of field. In fact, these lenses are sometimes referred to as perspective correction lenses (although we don't like that expression). For this reason, they are particularly appreciated by photographers who love architecture (think of all those verticals that you will be able to recover). However, their high optical quality has also imposed them in the field of product photography or for the realization oflarge panoramic in landscape photography.

What is the tilt-shift lens for?

As we commented on above, a tilt-shift lens is quite versatile and don't be afraid to use it to photograph something other than a monument or to achieve a mock-up effect, it does wonders ...

The famous mock-up effect occurs with tilt-shift type lenses thanks to the tilting of the lens which creates a new angle with respect to the sensor. In other words, the lens is no longer perpendicular to the image plane of the sensor. This tilting will modify the depth of field in your images, for a large or small depth of field, according to your desires and your precision.

This technique allows us to broaden our creative range for aerial shots, panoramas and landscapes in general with the so-called Scheimpflug law. Officer Theodor Scheimpflug was in charge of photographing the ground for the Austrian Air Force and in his search for geographical precision he participated in the birth of cartographic photography or photogrammetry . In 1904, he patented several devices to correct the distortion that appears in aerial photographs when the device was not perfectly vertical (perspective correction or representation more faithful to real perspective).

And from there was born the tilting lens which, by modifying the depth of field allows to obtain this curious effect.

As you may have seen, as tilt-shift lenses tilt, light enters the lens body differently, creating a controlled distortion in the image. And this will translate into “perspective control” (the quotes are not there by chance, the perspective effect will be influenced by the distance between the camera and the object being photographed). The vertical lines will not distract, will not want to bend and your photos will reproduce the buildings as they unfold before your eyes.

The main purpose of this objective is to correctly restore the geometry of the object photographed. A tilt and shift lens will not effect any apparent change in perspective, it will correct the geometric distortion that appears on a photo.

This is not the first photographic field that we will experience after buying a tilt shift lens and it is very likely that a panoramic head is easier to use… But hey, if we have it on hand, why not to take advantage of it?

The procedure to take a beautiful panoramic photo with your tilt-shift lens would be as follows:

With these basic tips, you can take beautiful panoramic shots.