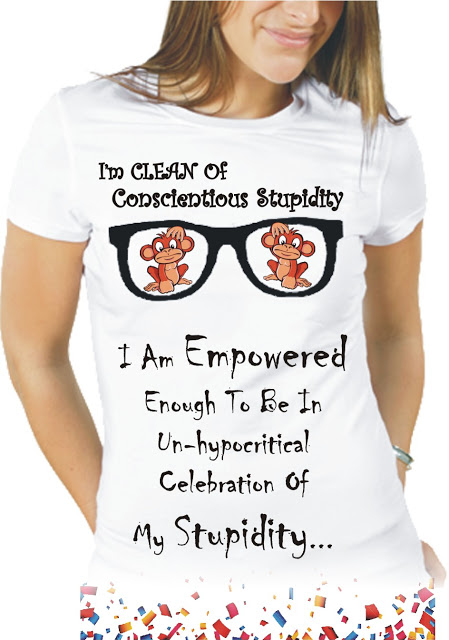 Admittance is half the riddance. Acceptance is catalytic and cathartic. It is facilitation of Innocence, which in turn is initiation of the fruition of Compassion – The Finality of Bliss. We need to seed Compassion, to harvest lasting Bliss. Let humanity begin with its innocence to accept its infinite and indefatigable Stupidities and Hypocrisies in the year 2020 and beyond, so that it could initiate and energize the pruning of the ‘heap’ at least a bit at personal levels. This sure shall absolve humanity of the colossal culpability of ‘Conscientious Stupidity’.

Humanity celebrates all good values. We have days marked for celebrating all good things. Should we not celebrate stupidities and hypocrisies too? At least, it makes bad things easy to be accepted? Acceptance keeps things upfront for Consciousness and memory. Celebrating something by marking it ‘worth rejoicing’ has magical impact on collective unconscious of masses. Humanity in general knows and accepts that human stupidity and hypocrisy are universal, ubiquitous and unputdownable. Non-acceptance and ingenious evasiveness about something so powerful and so deeply instinctive human character and element of consciousness itself stands as the worst Culpability of Humanity.

It is primarily because of the shame and guilt associated with stupidity and hypocrisy, as if it is some disease an individual has caught and rest are clean! Celebrating stupidity and hypocrisy is probably the most innocent and honest way towards the compassionate acceptance of its universality and inevitability for all humanity – I, You and They. It is not a shame or guilt; rather a mechanism of human body-mind reality, which every one of us very commonly have and therefore must ourselves see, identify, admit, express and even publically celebrate them. This shall unleash the shame-guilt associated with stupidities and hypocrisies, which we all happily indulge in yet make all possible efforts to hide and bury in the deep abyss of our own subconscious minds.

There is a beautifully innocent precedent in history of humanity. In ancient Indian traditions, Stupidities of Sexuality were probably un-hypocritically accepted, innocently expressed and unashamedly celebrated by carving out sexual posturing on the outer walls of temples itself. Elaborate and descriptive texts were written on the sexuality of humanity and every shade of sexual stupidity was compassionately accepted; even celebrated. In ancient Indian theatrical traditions, all human drives and shades of instinctive behavior were openly portrayed and aesthetically presented before common people. Probably, this had a very powerful impact on the empowerment and societal equality of women in ancient societies and cultures. Un-hypocritical acceptance and innocent admittance of stupidities, which are essential and innate design of humanity, cannot be anything but hugely empowering. Shaming it and evasiveness probably only emboldens stupidities to install deep hypocrisies to corrupt humanity.

This is happening in contemporary societies across the globe. It has made the humanity sick, permanently ailing and terminally unhealthful. What other better way to reverse and redeem this process by declaring the very landmark year 2020 as the ‘Year Of Stupidity’, celebrate it with open, honest and innocent hearts and admit – Let all shades of human consciousnesses of the world unite to unburden humanity with as much of load of stupidity and hypocrisy as possible in 2020 and the years to come. The enterprise must begin by first understanding the very mechanism and processes of innate and embedded design of human stupidities and hypocrisies. And then, unlearn the nine core stupidities. This eBook titled, ‘2020: Year Of Stupidity’, sincerely and humbly lists them out.

Let the ball roll…! Let’s decipher, understand and celebrate…What better time than the dawn of the landmark year of 2020…!