WHERE ARE SPICES GROWN IN INDIA 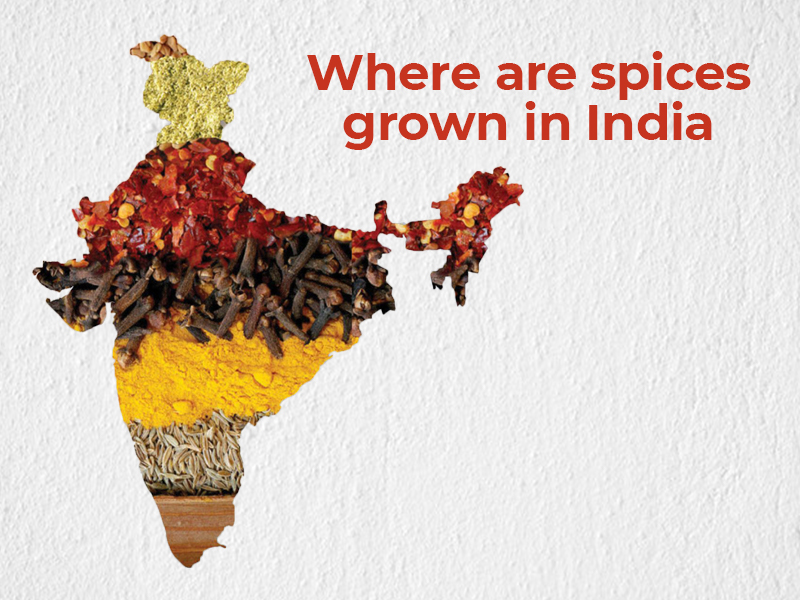 Spices have been embraced in many different civilizations and parts of the world since the historical era. For thousands of years, they have been used as food, medicine, and flavouring. India is a country of spices and has always been considered a land of delicious cuisine.

Our ancestors found some of the greatest Indian spices, while others were traded and brought to India. It is because of this variety of spices that India has such varied cuisines. South Indian cuisine is completely different from that of the north. And the east and west also have distinct tastes. Spices were exchanges in the past with the spices cultivated in India, and thus the notion of the spice trade and discovering new spice routes has dwindled over time.

Over time, India has not only become self-sufficient but also an exporter of spices that were previously not cultivated in India. In terms of spice production and export, India has a beautiful history, a pleasant present and a promising future. Currently, India is the world's major exporter, consumer, and producer of spices and spice products, producing over 50 spices. India is also a primary supplier of spices such as chilli, turmeric, cumin, pepper, and many more.

Currently, India has 28 states and 8 union territories, and each has its unique contribution to spice production, no matter how trivial or tremendous the state. Let's see which spices grow in which parts of the country:

India is the world's leading producer of spices, with chilli being one of the most important. Chillies require temperatures similar to peppers as well as moderate rainfall to flourish. The wonderful thing about chillies is that they can grow in a wide range of soil conditions. Andhra Pradesh is the greatest chilli-consuming area, with the majority of chillies cultivated in Guntur, Warangal, Prakasam, East and West Godavari, and Khammam. They are also grown in Assam, Gujarat, Madhya Pradesh, and Uttar Pradesh. The well-renowned Indian spice brand Vasant Masala procures its red chillies from Guntur and Andhra Pradesh.

Turmeric is another essential spice, and it has medical properties such as the capacity to heal internal and exterior body ailments as well as the potential to improve skin shine. Turmeric is essential to research because of all of its characteristics. It is critical to research turmeric because of the above significant aspects. It requires sandy and clay soil that is well-drained. It may also be seen growing on red, medium-dark, or alluvial soils. India is also a significant producer of turmeric on a global scale. Andhra Pradesh produces the most, accounting for approximately half of the total turmeric output in the country. It is cultivated in Guntur, Cuddapah, Mysore, Belgaum, Coimbatore, and Orissa, as well as Maharashtra, Tripura, Bihar, and Assam.

Ginger's therapeutic qualities are the reason it is used in so many cuisines and medications. Ginger is cultivated in tropical and subtropical climates with temperatures ranging from 10° to 25° C. You'll be surprised to learn that India is the world's greatest producer of ginger, accounting for up to 80% of global production. Mizoram, Meghalaya, Kerala, Sikkim, and West Bengal are the leading producers, with Kerala being the largest.

Garlic is an ingredient found in virtually every meal throughout the world. It is cultivated on well-drained, loamy soils with high humus content. The soil should be rich and neutral in pH. Garlic is farmed in Gujarat, Orissa, Maharashtra, Uttar Pradesh, Madhya Pradesh, and Rajasthan, among other places. Gujarat is the most prolific producer. It's also an excellent low-maintenance cash crop.

Fenugreek, also known as 'Methi,' is a plant native to Southwest Asia that is widely cultivated for medicinal and culinary purposes. It's a multi-purpose plant. The seeds are a spice, the dried leaves are a herb, and the fresh and delicate leaves are a green leafy vegetable. Rajasthan is a state where it is commonly cultivated. Other states where it is farmed include Uttaranchal, Gujarat, and Madhya Pradesh. This crop is mostly produced in the colder months. The quality of Vasant Masala's fenugreek seeds are well known; they procure high-quality Fenugreek Seeds sourced from the rich lands of Madhya Pradesh.

It is yet another important crop in India. Mustard is an essential component in any spice cabinet. Mustard grows well in most soils but produces the most seed in rich, well-drained, well-prepared soil with a pH of at least 6.0. It will flourish if kept wet at all times. It prefers chilly temperatures, and a small frost might even increase the flavour. Mustard is grown in the Indian states of Bihar, Assam, Orissa, West Bengal, and Punjab. This crop is also cultivated in Uttar Pradesh and Himachal Pradesh.

It is one of the most used spices, especially for garnishing meals. Temperatures ranging from 17° to 27° C are ideal for growing coriander. Coriander is best seeded directly in pots rather than in seed trays and then transplanted. Coriander is mostly grown in Gujarat, Madhya Pradesh, and Rajasthan in India. Andhra Pradesh, Tamil Nadu, Karnataka, and Uttar Pradesh are other states where coriander is cultivated.

If we're going to talk about spice-growing states in India, we should also talk about the future of the spice business. It is important to research and plan for future growth now in order to achieve it in the future. In the current condition, India is one of the world's largest spice producers, consumers, and exporters. So, in the future, if the market demand for any product in the globe increases, so will the Indian spice market. In fact, even during these tough times of the COVID-19 pandemic, the demand for Indian spices has grown tremendously.