Josef Mengele – The Curse of the Jews 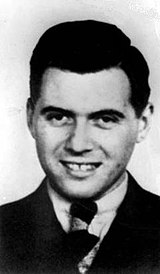 When people’s acumen to differentiate between right and wrong, blessing and a curse is crushed, there is an incessant injustice. We no longer are the superior beings at that point in time but crumple low to being mere animals. World War II was one such instance and Josef Mengele was one such ringleader. Josef Mengele is the name which the Jews take with the utmost acrimony today. It is the name that was responsible for torturing the Jews in and out, physically, emotionally and mentally and led to their brutal death. ‘The Angel of Death’, as he was popularly known was no less than a nightmare for the poor Jewish population and he subjected these people to gory deaths with his anti-Semitic tendencies.

Born in Bavaria which was the epicenter of the German Empire, Josef completed his schooling there and went to study at the University of Munich, Germany. Munich was the headquarters of the Nazi Party of which Adolf Hitler was the dictator. The stage was set. Being good at school, smart, elite and now a doctor, he was determined to raise high in the Nazi Party. Soon, he got transferred to the Auschwitz concentration camp in a bid to conduct his research on human subjects.

In the Auschwitz concentration camp, he was responsible for selecting the people to where they belong. The sick, woman and children were directly sent to the gas chambers and those who were fit for work were sent to the camp. Nevertheless, the latter also died due to exhaustiveness, malnutrition, and spread of contagious diseases. Josef’s rotation of his hand to segregate people was just based on the direction, right or left, but for the Jews, it was their life or death. Deciding someone’s fate just in a matter of seconds was the utmost pleasure for him. Apart from this, inside the camp, he focused his attention on twins. His experiments included conjoining twins back to back with no curtsey for his victim’s trauma, pain or safety. As if this was a heroic deed, he was awarded the War Merit Cross, an honor bestowed on people helping society and humanity.

Before the arrival of the Red Army of the Soviet Union which liberated the Auschwitz camp, Mengele disguised himself and fled to escape capture. After his departure, in nearly two instances, he was captured and examined, but as fate would have it, he never faced trial for the rest of his life. To be always on the other side of death, he molded his devious ends to suit his needs. After obtaining the records from other doctors, he edited them a bit and became the all-new ‘Fritz Hollmann’. This new identity took him to Rosenheim where he found agricultural work of growing potatoes.

In order to subdue the fear of being caught and face a death sentence, Mengele decided to leave Germany in 1949 and arrive in Argentina, where he could easily blend into the crowd and continue to live his life without fear. But reaching Argentina was no easy task. Reaching Argentina easily would need the protection of a new identity and documentation. Soon, Mengele became ‘Helmut Gregor’.

Mengele had money. That made all the difference. Other Nazi criminals who being searched alongside Mengele went to the mundane 9 to 5 jobs after escaping the trial, but Mengele invested in the carpentry business. Even after inflicting so much suffering on the Jews, his life was easy and growing. After applying for a permanent residence ship in Argentina, he decided to remarry and grow his business pursuits. To set up a business is no child’s play. It needs original documents and approvals. For a common man, it would be an arduous task, but for Mengele, his position and degree saved him even this time.

Moving forward on his business interests, he went to Paraguay and submitted documents for the Paraguayan citizenship. Further on, moving to Brazil with the aid of his henchmen, he struck a partnership with the Stammers, the Hungarian expatriates who wanted to settle in Brazil. Mengele, on the other hand, wanted refuge. This deal continued on for some years until in 1979, Mengele suffered a cardiac arrest while swimming in the Brazilian waters. A tale of unprecedented horrific crimes against humanity was now over.