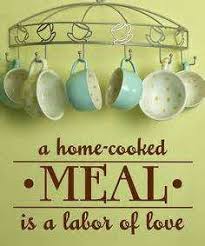 Every girl has a first culinary experience

My mom had been hounding me to learn cooking as she felt it was an art every girl must acquire.But her words fell on deaf years.I was neck deep into academics and I thought cooking to be like a chemistry experiment .As the reactants(ingredients) would be mixed or combined ,I would soon obtain the product(dish).My world revolved around the microscopes,chemicals and the laboratory.But before I could say Jack Robinson I had been hitched into Holy Matrimony.As they say 'The way to a man's heart,is through the stomach" was a true saying.My hubby was a food connoisseur and relished good,home-cooked food.Now I was in a soup as my culinary skills weren't up to the  mark.But I had self-confidence  to prove my prowess.

After marriage as per custom the bride is inducted into the family by cooking her first meal for the family.I was shown the face of the kitchen,given all the ingredients and asked to cook.My m.i.l shoved everybody out of the kitchen and I was asked to prepare the lunch.I saw them all chilling in the sitting room including hubby.No google was there to come to my rescue, a small cook-book I had carried with me was my only hope.I thought of giving them a Chinese fare,so decided on noodles,fried rice,manchurian and a dessert.I started dicing the vegetables with gusto without paying heed to my thumb and suddenly drop of red was seen on the cabbage.I winced in pain,I had cut my thumb.My screaming brought the family into the kitchen and soon hubby put an ice-pack to stop the blood gushing.M.I.L gave me a cold look seeing my naivety in kitchen work.Soon I felt better and assured them of a good meal.

My vegetables diced,I started with the cooking following instructions from the cook-book.I took good four hours to complete the meal while the family grumbled as their stomachs rumbled.Soon I dished out the gourmet meal and invited the family to partake the meal.They fell on the food as hunger was killing them.I had hoped to be lauded  for my efforts but the reaction was of a different kind.The noodles were overcooked instead of al dente, with vegetables a bit burnt but hubby manfully dug into them,M.I.L tasted the rice and manchurian and gave a sniggering remark as the onions in the manchurian had caramellised,the rice was salty and the gravy was floating.F.I.L and B.I.L having a sweet tooth tried the dessert while I waited with bated breath(a la-masterchef) and soon their reactions put me off.The dessert had less sugar,the nuts were not well fried and the milk used had not been sufficient.They scoffed at my culinary skills and then I decided to learn cooking.Today I have acquired the culinary skills and I am lauded as a good cook.Cooking needs love and dexterity.