Let There Be Rain (Tobu O Bristi Asuk) :: A Master Piece of Poetry 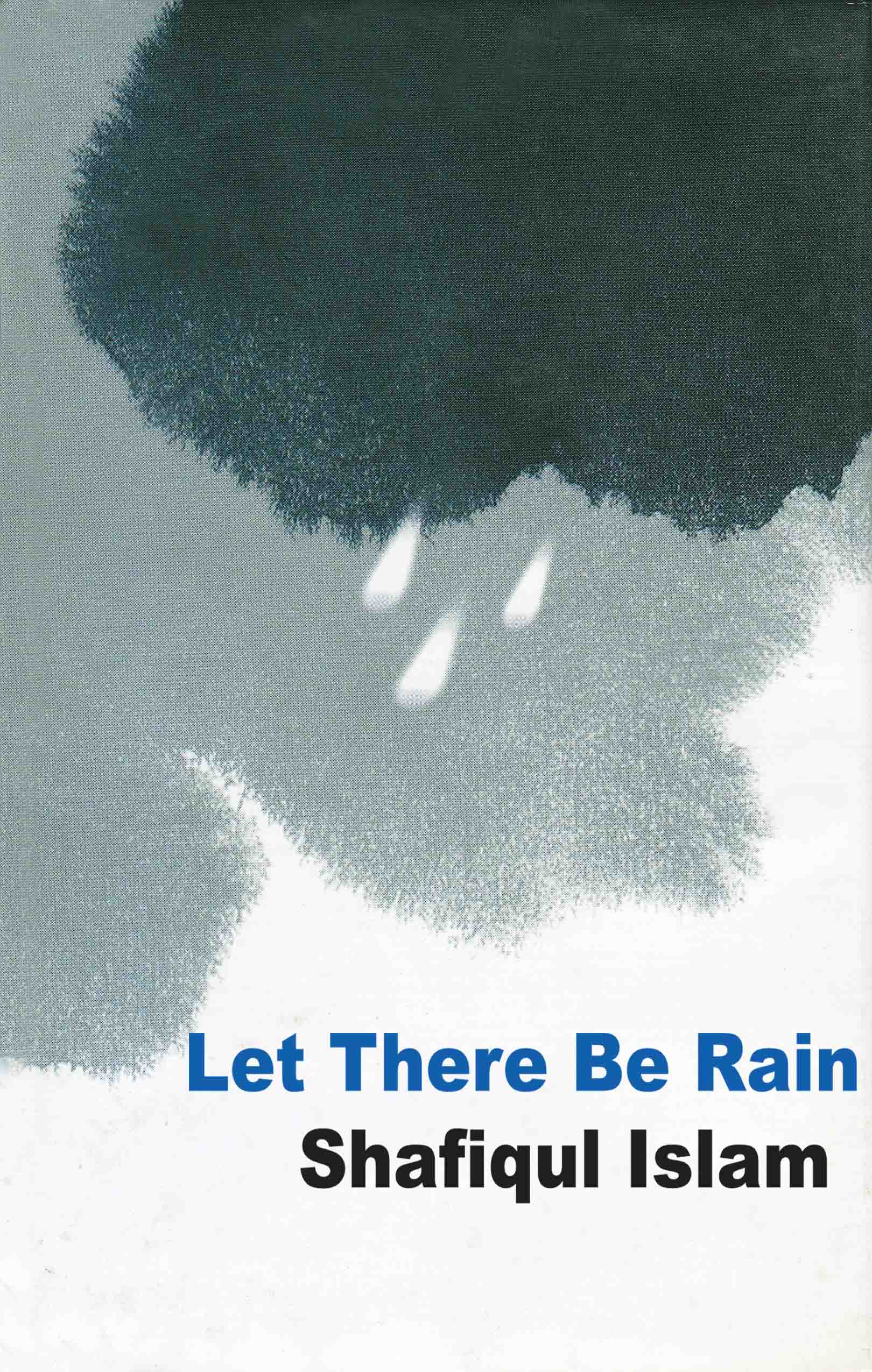 Reviewed by Prof. A. Noor

Let There Be Rain (Tobuo Bristi Asuk) is a collection of 41 poems of variegated tastes and flavor mostly of personal trend and characteristics by Shafiqul Islam, a young Poet of great erudition bestowed with an attractive poetic vein.

It seems to me that the poet wanted to compose a book absolutely on love the mental anguish of separation or desertion. But he has an intellectual negation to be identified in that condition and so he has inserted few poems of different types in the collection just to bedim that factual truth .However the poet has every right to do it. In the poem Tobuo Bristi Asuk (Let There Be Rain), the poet addresses the rain after a long time as blessing as a symbol of life and freshness. The proposed rain may tend a new life and fruition to all the sandy region of the globe, all the drought inflicted areas of the world despite personal sorrows and suffering of the poet from the rain if it really comes down. The  poet iseagerly  awaiting  therain  and  mentallyprepared  to undergo all sorts of disadvantages from the rain.

At times a poet cannot be easily detected .He speaks and narrates things from a distance. We have such an example of a piece of poetry in this collection of poems, namely- ''D'' (D for Diana) .The second poem addressed to a late lady of universal decency and decorum, it may not be easy for the young and most readers of the poem who this lady is . It is known best to the poet himself but so far our observation looks in the past and from the description of the poet--

“In the bustle of this world

Once you had your harmonious tone

On the highways of this world

You let fall your invaluable footsteps.”

The poem might have been composed on the all-accepted, all-loved lady ever born and ever entered the Buckingham palace as a bride and she is nobody but princess Diana who died in a miserable car accident in the last decade but having her all human and divine virtues that impressed our poet .The lady in question died as a result of psychological at war between heaven and earth. She herself represented the heaven .She had an indomitable love for the people of the world and she proved her that glorious traits of love by traveling different countries and her so-called free but innocent mixing with them left her to a state of being neglected by her husband . She understanding her position, although a mother of two sons, could not remain connected within the palace bereft of husband’s love and got family indifferences.

The poet is cut to the quick to understand all of the members of the royal family for this cold behavior with her. He though belonging to another caste and creed, cannot help showing his hearty sympathy for her ill-fateand consoling himself in the following sketch.

“But you in my heart

That the rare picture has drawn on it

Neither in sun-shine nor in water of the world

I know that will ever be effaced.

‘D’ now you are an inhabitant of the world hereafter-

One day you descended here wrongly

To our poor earth having loved us.

The poem is in the spirit of an elegy and the poet has registered all his poetic strength to make her (Diana) ever living and ever adorable for her divine qualities among the crowds of simple /ordinary faces of women ornamenting high seats and positions among us -- home and abroad but quite unworthy of being equal in status from the standpoints of ever immortal human virtues as possessed by the late 'D' Princess Diana of England.

The third poem ,"Akjon Beer Jodda"( A valiant warrior) a sketch on a political figure does not appear to me to be a new something .We are accustomed to coming across compositions like this one. This poem portrays the saddest story of a national hero who bought for the liberation of the motherland of the poet but he was mercilessly killed by his associates as an armless hero.

He is an ever victorious hero

Returned from the war,

The poet has written three poems absolutely of personal cadres on his mother and father. In the poem on his mother he portrays a mother as a perennial source of inspiration in the onward movement in the struggle of life. In two pieces of poetry composed on his departed father, the poet sorrily accepts the loss of his father whose kind behavior in the past disturbs his peaceful living at the moment .The poet had in his mind to write elegy. His portrayal of his parents indicates his possessive mind devoted to them.

There is another poem Tinti khoti (Three Casualties) upholding before the readers how the poet has crossed from his childhood to youth, bidding adieu to the sweet memories and objects of enjoyments and comports. There is a small poem ,"hea jiban, Akdin Tumi Chhela (O, my life one day you're) in the collection. It is a poem of high appreciation painting life from multifarious platforms like some philosophical poet's interpreting life as a puzzling mystery .This poem teems with poetic fervor both in matter and manner and it surely makes the poet powerful and observing the fleeting but touching modes of life— an ever  inexplorable riddle.

In "Prithibir tin vag jol Ak vug sthol (Three-fourth of earth is water) the poet leaves heavy sighs and despair on life being utterly dissatisfied with the go of the world. Life hangs very heavy with the poet finding no other way to survive from his mentally emerging state .He is confirmed that his sweet dreams will never be realized and his is a life mean for shedding tears in the sea with unquenching thirst for getting the object in mission.

Our review over the poems of the collection discovers that the cost of the poems forming an overwhelming majority disturbs or tortures the speaker in season or out of season ceaselessly in the surname of either the Nandita or all the time in the name of Sulota-- a woman whom the speaker liked or loved heart and soul. The speaker cannot help being a puppet at the witchery of her past mixing or mutually loving each other and at the moment standing aside and suffering the pain of separation.

There is ample weakness of the speaker towards Sulota whom he helplessly requested to come back to him and thereby save him from being destroyed. In the piece "Sulota, Akhono Shomoy Ase (Sulota, yet there is time)--

“Sulota, yet there is time

Please return to this heart,

Else this planet will turn into

A tragic and lonely island,

In a twinkling of an eye

out of one heart’s groaning.”

To the speaker, Sulata is a peerless woman for him to like and love. In fact Sulota cannot be forgotten and speaker is not in a state of losing .Sulota in oblivion. She is a young woman, a great excellence and hence the speaker cannot but describe Sulota's physical beauty with those of the greatest object of nature ever known to him. Sulota's physical beauty is innocently portrayed by the poet in the following touches in the poem "Akasher Megho Ak Shomoy (The cloud of the sky too at a time)--

The aforesaid similes with which the poet draws Sulota's divine beauty undoubtedly speaks of the poets wide range of knowledge as well as his vast possession of pure literary terms to describe things of aesthetic beauty and we find a ground to appreciate his so-called grave geniality.

In the second page of the front cover the concluding sentence is 'The poetic collection has contained a set of poems full of memories of the past love, and separation enriched with conscience and illumining on this assertive statement supplied by the poet we can certainly say that 'Tabu O Brishti Asuk (Let There Be Rain) is a collection of poems mostly on deserted love and moan of separation.

As regards the choice of words I like to say that the poet was conscious enough to use the fit and concrete word to the matter he had chosen to highlights, Credit goes to him for guarding him against the use of popularly cheap or slang words which are found in our folk songs or poems. The poet has a mentionable control over his expressions and he seems to be in search of new and never images and illustrations. I also say that his expressions are of his own but I do not preach that he is classic in mode but I claim that if he has not succeeded in all the poems, surely has not failed in all of them. Some of the expressions are, no doubt, the triumphed and the height of blank verse at the hand of a mounting poet in the horizon of Bangla poetry.