Maya Angelou - A true surviver against the odds. 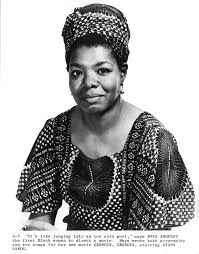 She was a poet, singer, memoirist and civil rights activist. She has published three books of essays, several books of poetry, seven autobiographies and a number of plays, movies and television shows spanning over 50 years. Having received dozens of awards and more than 50 honorary degrees Maya is best known for seven autobiographies which focus on her childhood and early adult experiences. Her first poem I Know Why the Caged Bird Sings (1969) is a narrative of her life up to the age of 17 and brought her international recognition and acclaim.

She is the second child of Bailey and Vivian Johnson. Her older brother nicknamed her Maya (derived from ‘My’ or ‘Mya Sister’). When she was there her parents ended their marriage and she along with her brother were sent to Stamps Arkansas to her paternal grandmother’s place. Annie Henderson was an exception to the harsh economics of the African Americans and flourished financially during the Great Depression and the World War II since she had a store that sold the basic commodities.

After four years their father suddenly returned and returned them to their mothers care in St. Louis. While living with her mother she was sexually abused and raped by her mother’s boyfriend called Freeman. Angelou became mute for almost five years after that incident believing, as she stated, "I thought, my voice killed him; I killed that man, because I told his name. And then I thought I would never speak again, because my voice would kill anyone". It was during this period Angelou developed her brilliant memory, an immense love for her books and literature and her ability to observe the world around her.

Almost immediately after Freeman’s murder Maya and her brother were sent back to their grandmother and over there a teacher, Mrs. Bertha Flowers helped her speak again by introducing her to authors such as William Shakespeare, Charles Dickens, Jessie Fauset, Anne Spencer and Frances Harper who changed her life as well as her career.

When Maya was 14 they moved in with their mother again who lived in Oakland, California. During WWII she attended the California Labor School. Even before her graduation she was the first black female streetcar conductor in San Francisco. At the age of 17 which was around three weeks of completing school she gave birth to her first son Clyde (later known as Guy Johnson).

In 1951 she married Tosh Angelos who was a Greek electrician, former sailor and aspiring musician. She took modern dance classes during this time and met Alvin Ailey and Ruth Beckford. Later on Maya and Ailey formed a dance team and called themselves ‘Al and Rita” and performed at fraternal black organisations throughout San Francisco but that didn’t work out. She with her husband moved to NYC so she could study African dance with Pearl Primus who was a Trinidadian dancer but returned to San Francisco a year later.

After her marriage ended in 1954 she danced in clubs like the Purple Onion. Until that time she went by the name Marguerite Johnson or Rita but when the manager and her supporters suggested she changed her name to Maya Angelou which captured the feel of her dance performances. During 1954 and 1955 she toured Europe with a production of the opera Porgy and Bess. She gained fluency in several languages while visiting several countries. In 1957 she recorded her first album Miss Calypso out of which a CD was made in 1996. In the 1957 Calypso Heat Wave she sang and performed her own compositions.

She met John Killens in 1959 and moved to New York at his convincing. She met prominent African-American authors like Rosa Guy, Paule Marshall and Julian Mayfield. When she heard Martin Luther King Jr. and listening to his talk she and Killens organised the Cabaret for freedom to benefit the Southern Christian leadership Conference and was elected as its Northern Coordinator. The scholar Lyman B. Hagen declared Maya’s efforts as successful. Her pro-Castro and anti-apartheid activism also began at the same time.

In 1993, Angelou recited her poem "On the Pulse of Morning" at the inauguration of President Bill Clinton, becoming the first poet to make an inaugural recitation since Robert Frost at President John F. Kennedy's inauguration in 1961. Her recitation resulted in more fame and recognition for her previous works, and broadened her appeal "across racial, economic, and educational boundaries”. The recording of the poem won a Grammy Award. In June 1995, she delivered what Richard Long called her "second 'public' poem", titled "A Brave and Startling Truth", which commemorated the 50th anniversary of the United Nations.

Angelou's successful acting career included roles in numerous plays, films, and television programs, including her appearance in the television mini-series Roots in 1977. Her screenplay, Georgia, Georgia (1972), was the first original script by a black woman to be produced, and she was the first African-American woman to direct a major motion picture, Down in the Delta, in 1998.

In 2013, at the age of 85, Angelou published the seventh autobiography in her series, titled Mom & Me & Mom that focuses on her relationship with her mother.

Angelou was honoured by universities, literary organizations, government agencies, and special interest groups. Her honours included a Pulitzer Prize nomination for her book of poetry, Just Give Me a Cool Drink of Water 'fore I Diiie, a Tony Award nomination for her role in the 1973 play Look Away, and three Grammys for her spoken word albums. She served on two presidential committees, and was awarded the Spingarn Medal in 1994, the National Medal of Arts in 2000, and the Presidential Medal of Freedom in 2011. Angelou was awarded over fifty honorary degrees.

·         ”It is time for parents to teach young people early on that in diversity there is beauty and there is strength.”

·         ”Music was my refuge. I could crawl into the space between the notes and curl my back to loneliness.”

·         ”My great hope is to laugh as much as I cry; to get my work done and try to love somebody and have the courage to accept the love in return.”

Angelou died on the morning of May 28, 2014. She was found by her nurse. Although Angelou had reportedly been in poor health and had canceled recent scheduled appearances, she was working on another book, an autobiography about her experiences with national and world leaders. During her memorial service at Wake Forest University, her son Guy Johnson stated that despite being in constant pain due to her dancing career and respiratory failure, she wrote four books during the last ten years of her life. He said, "She left this mortal plane with no loss of acuity and no loss in comprehension".

Tributes to Angelou and condolences were paid by artists, entertainers, and world leaders, including President Bill Clinton, and President Barack Obama, whose sister was named after Angelou. Harold Augenbraum, from the National Book Foundation, said that Angelou's "legacy is one that all writers and readers across the world can admire and aspire to." The week after Angelou's death, I Know Why the Caged Bird Sings rose to #1 on Amazon.com's bestseller list.

On May 29, 2014, Mount Zion Baptist Church in Winston-Salem, of which Angelou was a member for 30 years, held a public memorial service to honor Angelou. On June 7, a private memorial service was held at Wait Chapel on the campus of Wake Forest University in Winston-Salem. The memorial was shown live on local stations in the Winston-Salem/Triad area and streamed live on the university web site with speeches from her son, Oprah Winfrey, Michelle Obama, and Bill Clinton. On June 15, a memorial was held at Glide Memorial Church in San Francisco, where Angelou was a member for many years. Rev. Cecil Williams, Mayor Ed Lee, and former mayor Willie Brown spoke.

In 2015 a United States Postal Service stamp was issued commemorating Maya Angelou with the Joan Walsh Anglund quote "A bird doesn’t sing because it has an answer, it sings because it has a song", though the stamp mistakenly attributes the quote to Angelou. The quote is from Anglund's book of poems A Cup of Sun (1967).On April 4, 2018, Google presented a doodle to honor her 90th birthday.