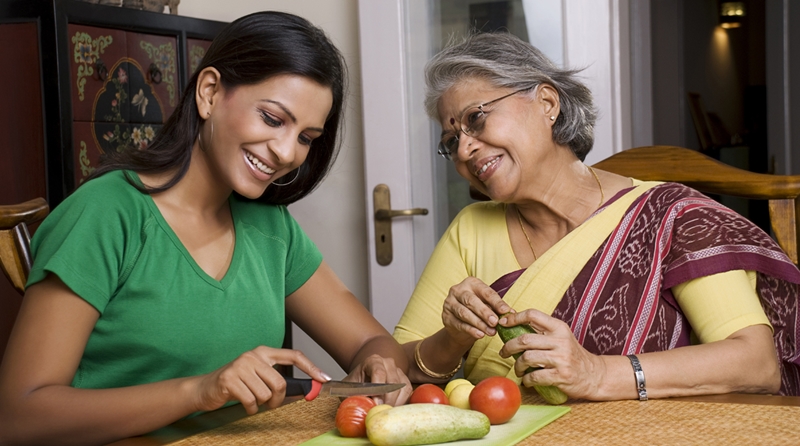 Why do we refer to the M.I.L--D.I.L relationship as an issue as this should be the most beautiful relationship between two new people.Two people sharing and loving a common person each in her own different way.But we see that once the D.I.L enters the marital home the M.I.L treats her like an outsider and the semblance of happiness turns into despair.Both M.I.L and D.I.L start vying for the son's or husband's attention which creates a rift between them.

Indian cinema has been instrumental in portraying a stereotypical image of the Indian M.I.l. as a dour faced, cock-eyed banshee.The Indian M.I.L was always shown as a vicious termagant,conspiring and conniving and creating a rift among couples.The D.I.L was showered with aspersions regarding her upbringing or her style of doing the household chores.The son was shown to be a mute spectator and sometimes being hand in glove with her evil scheming.

Patriarchy has been prevalent in our society,due to which girls were uneducated or got a bare minimum education and they remained confined within the four walls of the house.From the parental home they went to their marital home,where their life was looking after the home and hearth.Marriages took place immediately when girls obtained puberty.Their prosaic existence made them frustrated which they further vented out on their D.I.Ls.So girls were terrified to enter the threshold of their marital homes as they knew the M.I.L would be the Monster-in-law finding flaws in them.Their lives were  full of disdain but parents educated their girls to adapt to their married life without creating a ruckus.

Girls are well educated,pursuing careers and they enter the marital home with dreams of a bright future,a loving home and living happily ever after.But before they can give wings to their dreams their dreams are nipped in the bud.The in-laws put forth their own rules and the girl can't live on her own terms.The M.I.L is possessive,jealous regarding sharing the son with an outsider,so she finds flaws in the D.I.L.The girl fills stifled in such an environment and  her life becomes hell.Being throttled  the girl walks out of such a marriage.

Boys respect their parents and  are unable to stand for their wives,the love for the parents makes them mute spectators.They get sandwiched between their spouse and parents.M.I.Ls feel happy when their sons follow them blindly and the girl feels unwanted and wants her independence.

Clash of egos and difficulty in adjustment leads to issues between the  m.i.l and d.i.l.The girl wants her own personal space without interference whereas the mother-in-law wants to keep her position and dominance,so it becomes a bone of contention for both of them.Issues can be solved with harmony and understanding.The divorce rates which are becoming too high can be prevented if both sets understand and develop mutual respect towards each other.

The motto of our life should be to break away from the shackles of intolerance and unhappiness and dissolve  differences and become a family.