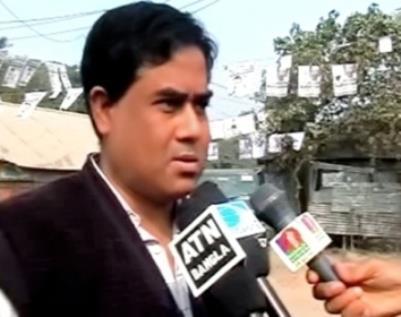 Poet Shafiqul Islam is a symbol of youth and Rebellion. The main theme of his poetry is love and rebellion. Besides writing poetry, he wrote a lot of songs. His patriotic and social-conscious songs attempt to stir up the people against discrimination and exploitation. He is enlisted lyricist in Bangladesh radio and television .

Shafiqul Islam was born on February 10 at khulia Para of Sekhghat in Sylhet district. Later their family started to live in Bagbari, the western part of Sylhet city. His father, Mantaz Ali was by profession a customs officer, his mother's name is Shamsun Nahar, a housewife.

He passed SSC from Aided High School in Sylhet district and HSC fromMadan Mohan College. He later received his Master's degree in Economics and Social Welfare from the University of Dhaka. He obtained MA degree in Islamic Studies from the Asian University of Bangladesh. While studying in the university he was awarded Gold Medal for his outstanding academic excellence

An honest and sincere officer poet Shafiqul Islam belongs to the BCS (Administration) cadre. His career began in Kushtia DC office as Assistant Commissioner. Later he became  Metropolitan Magistrate in the CMM Court of Dhaka City. He was former ADC, Brahmanbaria district. He also served as General Manager in the Road Transport Corporation of Bangladesh and deputy director of the Directorate of Relief and Rehabilitation. He also held position of Senior Assistant Secretary to the Ministry of home affairs, deputy secretary in External Resource Division in the Ministry of Finance and Ministry of Agriculture. At present, he is working as deputy secretary to the Ministry of Liberation War Affairs, Government of the Peoples’ Republic of Bangladesh. During his career, Shafiqul Islam traveled many countries for official purpose, among them Britain, Thailand, Malaysia, Vietnam, South Korea, Philippines and Singapore are noteworthy.

He has been writing poem since childhood. During his college life he published a literary journal named ‘Spandan’, edited by beating out a name. Moreover, during study in college his poems and short stories were being published in college magazine. Later, his writings were published in the local, national dailies as wel as  online newspapers. In 1981, he obtained ‘Bangladesh Council Literature Award in the nationwide literary competition organized by the then Ministry of Sports and Culture on the occasion of Ekushey February, the International Mother Language Day. The poet also received Author Honorary Award-2008. Recently, he received Nazrul Gold Medal award for his famous book "Tobuo Bristi Asuk (Let There Be Rain)" for poetic excellence. This book can be downloaded by writing "Tobuo Bristi Asuk" in the search box of Google play store. Besides this, he has written five volume of songs numbering more than two thousand and a half.

Apparently, many people described him as a poet of love and Separation but reading the poems in his books especially in the  "Dohon Kaler Kabbyo (Verses of Firey Days) and "Prottoyee Jatra (Indomitable Journey) it will be  clearly evident to anybody that he is a social-conscious poet of his time. Discrepancies and inequalities of society that have affected his mind very much can be realized easily.

Let the rain fall in the desert of conscience,

May the humanity bloom there alike flower.

And the world and evils of mind be purified.

Books  of poet Shafiqul Islam: His book of poem is being published one after another at different times in the Book Fair Of Ekushey February.His First published book is Aye Ghor and Aye lokaloy (This Home and This Inhabitant) in 2000 published from Proborton Prokashon.Second book is Akti Akash O Onek Bristi (One Sky and Many Cloud) in 2004 published by Amir Prokashon. His most famous book is Tobu O Bristi Asuk (Let There Be Rain) which is the publication of Agamee Prokashoni in 2007. Srabon Diner Kabbo (Song of Rainy Days) in 2010, a compilation of  lyrics, Megh Bhanga Roddur (Sunlight on the Cloud) in 2008 are also published from Agamee Prokashoni. His mostly social-conscious books are Dohon Kaler Kabbyo (Verses of Firey Days) in 2011 and "Protoyee Jatra (Indomitable Journey) in 2012, both are published from Mizan Publishers .

Now his books are available for download from these ebook publishing website- www.smashwords.com, kaljoyee.com,ডিজিটাললাইব্রেরি.বাংলা, www.grontho.com, sheiboi.com, www.chorui.com, bengaleboi.com, www.noboboi.com and www.eakash.com and also available for download from these forum like banglapdf.net, www.boighar.com, kazirhut.com, www.boilovers.com and www.boierdunia.in. His books are also available in the Google play store. There are a lot of videos on his poem recitation and song in the Facebook group and youtube. Now, his books are also available in rokomari.com (Phone: 16297 OR 01519521971), a famous online bookstore.