How did Siddhartha become Buddha? 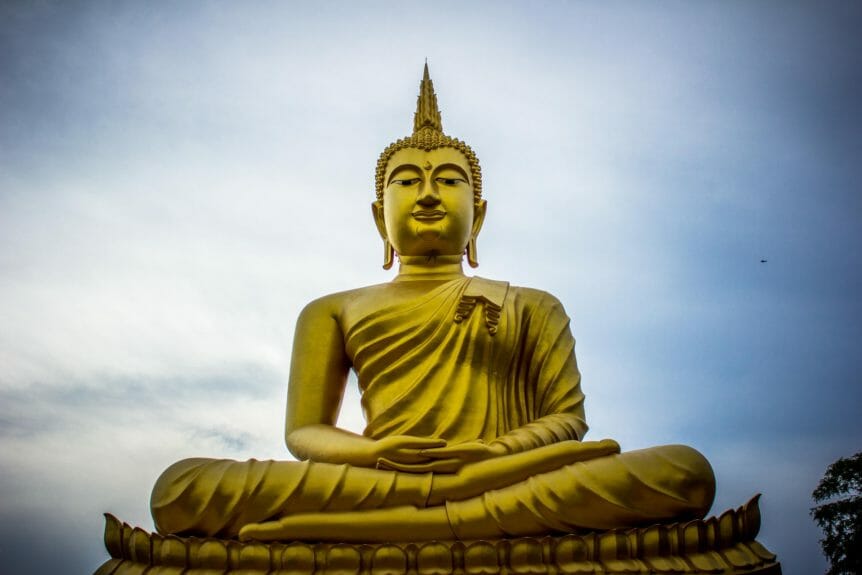 The Buddha who is the creator of the Buddhist religion was born as a dignified prince in 624BC in a place called Lumbini, now Nepal.

His father was the king who managed the tribe, on the outskirts of the place. His mother died within seven days of giving birth to him, but a holy man prophesized great words for the young Siddhartha: He would either be a great spiritual leader or a military leader or he would be a great king. In order to keep his son from observing the agonies and grieves of the world, Siddhartha's father made sure that his upbringing was in the lap of luxury. Siddhartha was raised in a palace just built for the boy that protected him from the knowledge of religion and human misfortune. According to the ritual, he married at the age of 16, but his life of isolation still continued till he was 29.

Discovering suffering and cruel reality of the world

The Prince was 29 with little knowledge about the world outside the walls of his extravagant palaces. He was unaware of the facts of existence, sickness, old age, and death.

At times Prince Siddhartha would go into the city, outside his father’s kingdom to notice how the people survived. One day to overcome his curiosity he asked a charioteer to take him on a sequence of journeys along the countryside. On these rides he was stunned to see an aged man, then a sick man, and then a corpse. The harsh truths of old age, disease, and death grasped and nauseated the Prince.

They left a deep thought on his mind and led him to comprehend that all beings without omission have to undergo the pains of birth, sickness, aging, and death. Because he inferred the laws of rebirth he also became conscious that they acknowledge these sufferings not only once, but over and over again. Seeing how everyone is trapped in this nasty loop of distress he felt unfathomable sympathy for them, and he developed a genuine desire to liberate all of them from their pain.

Finally, he saw a nomadic ascetic. The charioteer told him that the ascetic was one who had given up all worldly ties and is released from the fright of death and suffering. These life-changing sights are known in Buddhism as the Four Passing Sights.

When the Prince came back to the palace, he took no pleasure in the luxurious life. Even the revelation that his wife Yasodhara had given birth to a son did not satisfy him.

He recognized the fact that he could no longer live like a prince. He decided to give up his content living. That night he left the palace, shaved his head, and changed his royal attire to a beggar's robe. Denying all the lavishness he had, he began his pursuit of enlightenment.

Siddhartha started by looking for distinguished teachers. They made him understand various religious philosophies and how to meditate. Even after knowing the things, his doubts and questions lingered. He along with his five disciples left to fetch their answers on their own.

The six of them tried to find out the liberation from pain through physical obedience: surviving pain, holding their breath, fasting near to starvation. Yet Siddhartha was not satisfied.

It appeared to him that in discarding the bliss he had clasped the reverse of pleasure, which was pain and self-degradation. Now Siddhartha considered a Middle Way between those two edges.

He memorized an incident from his childhood when his mind had settled into a condition of ultimate peace. The path of liberation was through the discipline of mind. He understood that as a replacement of starvation, he needed sustenance to build up his power for the attempt.

A suitable place for Meditation: The Enlightenment of the Buddha

Siddharta then reached a place near Bodh Gaya, where he came across an apt place for meditation. He sat beneath a holy fig tree, known as Bodhi Tree. It was where he settled into meditation.

The effort of Siddhartha's mind came to be mythologized as a great battle with Mara. The demon's name means "devastation" and characterizes the obsessions that trap and deceive us. Mara brought huge armies of monsters to assault Siddhartha, who sat motionless and unhurt. Mara's most attractive daughter tried to distract Siddhartha, but the effort was in vain.

Finally, Mara stated the place of enlightenment fairly belonged to him. Mara's spiritual accomplishments were greater than Siddhartha's, the demon said. Mara's monstrous soldiers yelled out together, "I am his witness!" Mara questioned Siddhartha, Who will speak for you?

Then Siddhartha reached out his right hand to touch the earth, and the earth itself cried, "I bear you witness!" Mara vanished. As the morning star rose in the sky, Siddhartha Gautama realized enlightenment and became a Buddha.

The Buddha as a Teacher

After his illumination, he went to the Deer Park in Isipatana, located in now Uttar Pradesh, India. There he found the five companions who had discarded him and he moralized his first sermon to them.

This sermon has been conserved as the Dhammacakkappavattana Sutta and runs on the Four Noble Truths. Rather than teaching set of guidelines about enlightenment, the Buddha chose to lay down a path of practice through which people can attain enlightenment for themselves.

The Buddha dedicated himself to teaching and drew hundreds of followers. Gradually, he reunited with his father, King Suddhodana. His wife, the devoted Yasodhara, became a nun and disciple. Rahula, his son, became a beginner monk at the age of seven and spent the rest of his life with his father. The Buddha inspired millions.