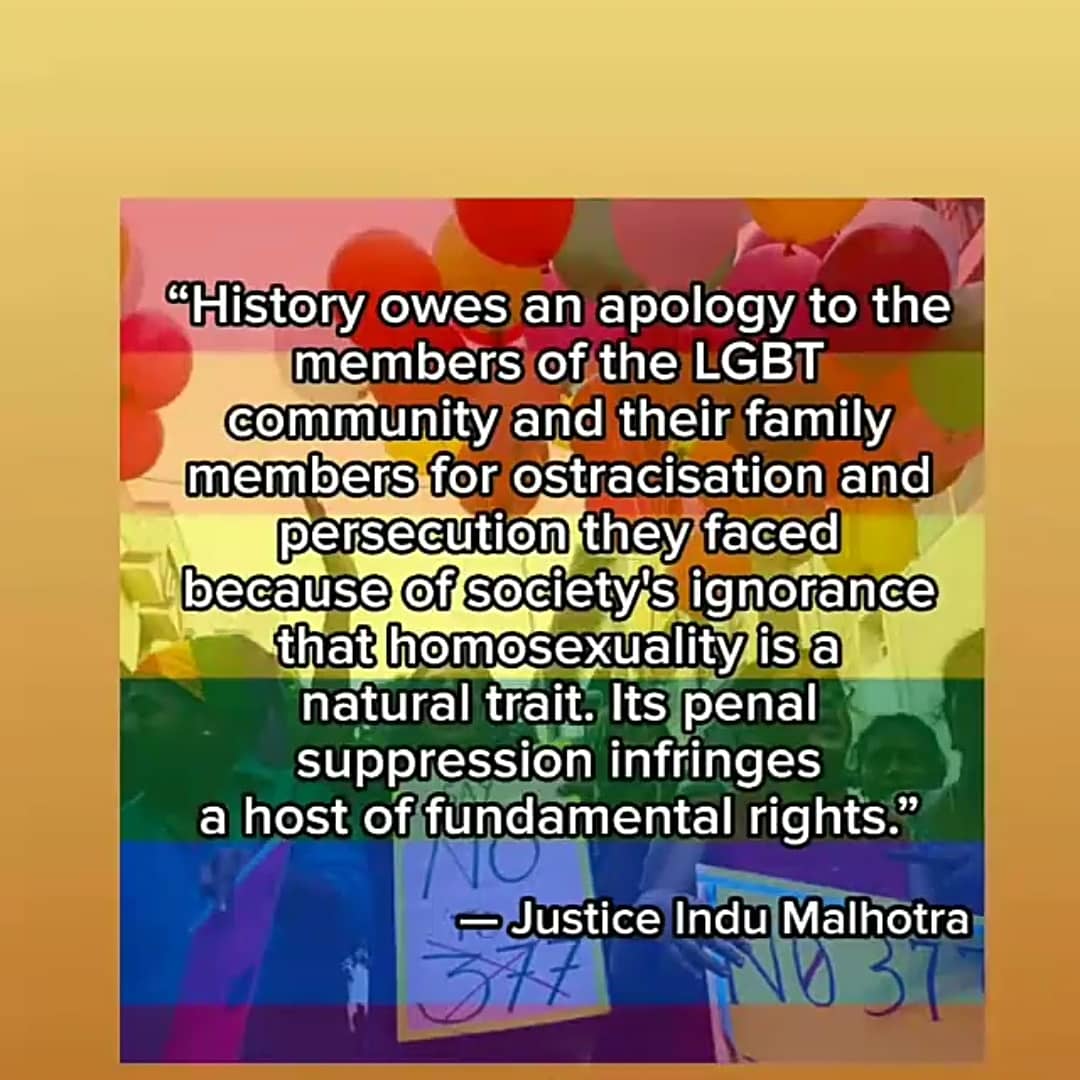 Marking 06.09.2018 a victorious date in the history for ‘LGBTQ Community’ India!

Thursday, 06.09.2018 is the new day with hopes steering high and the adrenaline rushing in full fervor for the LGBTQIA Community and its allies who has been fighting persistently in order to decriminalize Section 377 of Indian Penal Code.

The day has been seized and made into a historic moment for those whose very existence, identity, choices were considered a criminal act and posed a question on their survival and freedom in India.

The famous and bold slogan of any Queer Pride Parade in India :

‘कौन सा कानून हैं सबसे बत्तर? तीन सौ सतहत्तर, तीन सौ सतहत्तर’ is certainly a thing of the past. Indeed, it has been made possible because of the turning point that was seen in this case to quash ‘377’, when the honorable Supreme Court decided to reopen the case.

It is not the first time Section 377 was in news. In 2009, Delhi High Court said the section violated Articles 14,15 and 21 of the Constitution. But after a long contemplation upon it the Supreme Court got involved in the judgement and reversed the verdict in 2013.

The moment of ecstasy fueled up with emotional sentiments when a series of notifications buzzed on the phone on Thursday – “CJI DIPAK MISRA READS THE FIRST JUDGEMENT”, “PREJUDICE AND SOCIAL STIGMA STILL AFFECT A CERTAIN SECTION OF SOCIETY”, “CONSTITUTIONAL MORALITY CAN’T BE EQUATED WITH POPULAR SENTIMENTS”, “LGBT COMMUNITY POSSESSES THE SAME FUNDAMENTAL RIGHTS AS OTHERS DO”, “SECTION 377 CAN’T PUNISH GAY SEX BETWEEN CONSENTING ADULTS”.

The verdict by 5-0 has made the judgement all the way more reassuring and convincing. The judges highlighted a number of strong arguments backing up their verdict, some of them were:

This Judgement was long awaited by the LGBTQ Community and has been welcomed across the nation, as now they look forward to lead a life of freedom and dignity. “Respect for individual choice is the very essence of liberty under law thus criminalizing carnal intercourse under Section 377 is very irrational, indefensible and manifestly arbitrary”.

The judgement is a historic event when freedom and equality is concerned. The India that we that we are going to live in from now on is going to be a lot more inclusive and colourful.

Cheers to a more equal and inclusive nation than we had yesterday without the threat of being punished on the basis individual's identity and whom they choose to love.

Justice DY Chandrachud said “It is difficult to right the wrongs of history. But we can certainly set the course for the future. That we can do by saying, as I propose to say in this case, that lesbians, gays, bisexuals and transgenders have a constitutional right to equal citizenship in all its manifestations,” he wrote, supporting partial striking down of Section 377 .

This Judgement has shifted the entire narratives of identity to a brighter side. The responsibilities as citizens of the country has widened as we ought to thrive to act and bring this inclusiveness in our actions and turn a more freer India that we got today into a reality.