Story of Jarasandha – from Cradle to the Grave 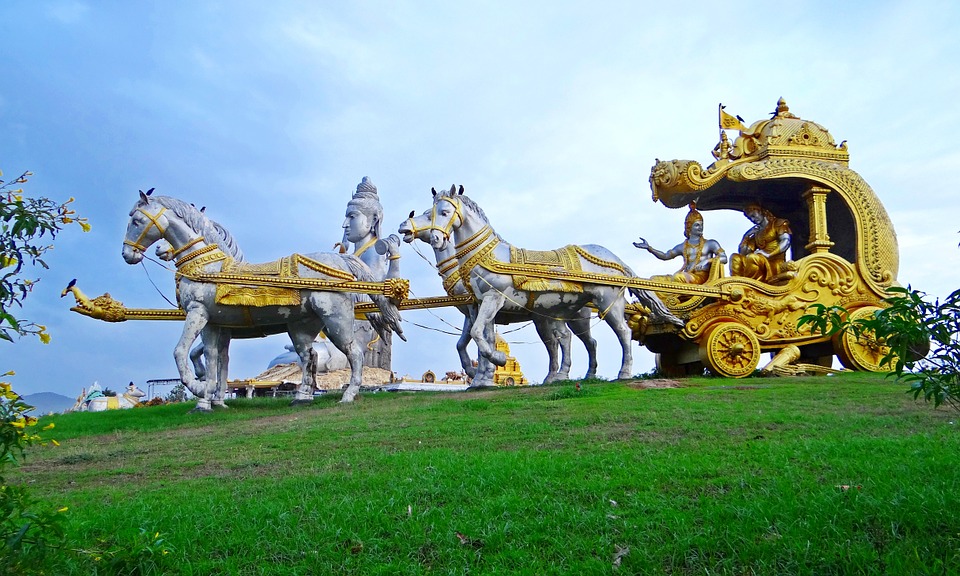 The King of Magadha, Bruhadratha, was very powerful, and was a religious man too. He was married to the twin sisters from the religious place of Kashi. But he did not have any children. Despite all the remedies that a king could afford those days, he was not successful in becoming a father. Disheartened, he lost interest in the royal affairs and decided to go to the forest in exile.

He used to spend the days inside the forest like an ascetic. One day, he came across Sage Chandrakoushika and expressed his interest to offer services to him. When the Sage agreed, Bruhadratha continued to serve him as a disciple. After a few days, the Sage was pleased with his sincerity and demeanour, and granted him a boon.

As expected, Bruhadratha expressed his desire to father a child. The Sage offered him a ripe mango and told him that if his wife, the Queen, ate the mango, she could bear a child. Bruhadratha was elated and returned to his palace. As he had two queens, he cut the ripe mango into two equal halves and gave a half each to them. As prophesied by the Sage, with passage of time, both the queens became pregnant. In due course, each of the queens gave birth to a half of a child. Scared by such a horrific incident, the King ordered the handicapped kids outside the palace premises.

At the night-break, the demoness Jara was roaming in the dark in search of food. She could trace the dead bodies of the handicapped kids. When she was about to eat the dead bodies dreaming of their tender flesh, something mysterious happened – the two halves combined into one live kid and the kid started crying.

Amazed at such an astonishing incident, Jara thought she might be rewarded if she brought this to the King’s notice. She rushed to the King’s place and explained the incident in detail before the King. The King became elated and rewarded the demoness Jara and named the boy as Jarasandha after her.

Jarasandha later grew up to become the invincible king of Magadha. He was a devotee of Lord Shiva; but as the demoness Jara helped breathe life into him at the beginning, he had inherited many qualities of a demon. Jarasandha had deep respect for the Brahmins. Everyday, after taking bath, he used to pray Lord Shiva. And then he was offering goodies/alms to the Brahmins who met him.

Jarasandha used to maintain a good rapport with all the powerful kings around, in order to expand his image and stature. He married off his two daughters, Asti and Prapti, with the infamous Kamsha, the King of Mathura. He also had a friendly relationship with Shishupala, the King of Chedi, and Rukma, Rukmini’s brother.

After Shri Krishna killed Kamsha, the two widows came back to Magadha. To avenge this, Jarasandha attacked Mathura seventeen times and was defeated by Shri Krishna every time. But to save the precious lives of the countrymen, Shri Krishna sent them all to the island kingdom of Dwaraka. Later, when Shri Krishna eloped with Rukmini, which enraged all – Shishupala (Jarasandha’s friend), Rukma (Rukmini’s brother), and Jarasandha himself.

Some days later, Jarasandha reared a strange wish in his mind. He wished to kill 100 kings and offer Lord Shiva a garland made of their heads. For that, he invaded all the kingdoms in Aryabartta and made their kings prisoners. He was falling short of 100, the magic number, by four, when the prisoned kings prayed Shri Krishna by sending him messages secretly. At that time, Shri Krishna was a guest at his cousins, the Pandavas. Yudhisthira was preparing to begin the Rajasuya Yajna, which would need him to lord over all the kings of Aryabartta. Shri Krishna encouraged the Pandavas to kill Jarasandha and release the prisoned kings under him. That way, Shri Krishna accompanied Bhima and Arjuna to Magadha.

Shri Krishna was well aware of the weaknesses of the opponents. So, all three of them disguised themselves as Brahmins and entered the kingdom of Magadha. After worshipping Lord Shiva, when Jarasandha was waiting to fulfil the wishes of all the Brahmins, all three of them came to the fore and invited him for a wrestling duel. Jarasandha, from their voices and outfits, got a doubt about their true identities and questioned them. Shri Krishna and the two Pandava brothers revealed their true identities.

Jarasandha decided not to fight against Shri Krishna calling him as an escapist and as someone from the cowherd community. Arjuna too was not fit for him to get into a duel with, because of his normal human physique. So, Bhima alone could win a chance for direct wrestling duel with Jarasandha. Both of them were equally powerful. So, their wrestling duel continued beyond twenty-seven days. On the twenty-eighth day, Bhima was at his furious best and tore Jarasandha’s body into two equal halves. As he was about to celebrate his victory, the two halves joined together again, bringing back Jarasandha to his previous form. Even repeated attempts to kill him did not get the desired result for Bhima. Disappointed at such mysterious results, Bhima looked at Shri Krishna for a cue. Shri Krishna picked up a piece of straw lying nearby, made that into two pieces, and then threw them in two opposite directions – the right part to the left side, and the left part to the right side.

Bhima could decipher the message from Shri Krishna and did the same with the two parts of Jarasandha’s body. That brought an end to Jarasandha’s life. After that, Shri Krishna made Jarasandha’s son the King of Magadha, and suggested him to work under the aegis of the Pandavas. The ninety-six kings prisoned earlier by Jarasandha were let free. Yudhisthira took all of them along with Jarasandha’s son to begin the Rajasuya Yajna.