Book Review -Kansa Book One of The Killer Trilogy 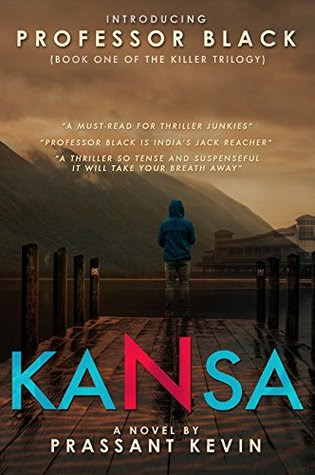 So, after a very disappointing start to February with Keepers of Kalachakra, I decided to pick this one up for a bit of light read. I was provided this book in exchange for an honest review and I would try my best to be as honest as possible. I chose this book for the sole reason that it did not promise any cheesy romance that Indian authors churn these days and the blurb provided quite an interesting read about a serial killer. Did the book live up to the expectation? Here is my take on it.

Over a span of ten years, he killed forty pregnant women and then vanished without a trace. After five years of silence, he is back again, seeking his next victim. Only one man can stop him - Professor Black. Maher was found unconscious in the middle of the highway and later, in the hospital, she revealed that she had escaped from a killer's house. All the details and patterns matched the serial killer 'Kansa,' who had disappeared five years ago after murdering forty pregnant women. ACP Saargi Desai was assigned to the case. She appealed to her department to bring back Professor Black to help her catch the killer. The Professor, who had a haunting past that had kept him away from the world of crime and investigation for several years, was not willing to take on this case. But the ACP managed to convince him to get on board just for this one last time. Soon after agreeing to help, the Professor realized that for the first time in his life, he had met his match. As he dug deeper into the case, everything got dirtier, the stakes went higher, and nothing was what it seemed.

My Take on the Book:

Imagine you are being provided a box of Bertie Bott's every flavor bean recommended by a friend and as soon as you take the first bite, you get a bad flavor. The same case happened with me while I was reading this book. Within the first 10 pages of the book, you realize the book was more of an essay rather than a thriller that was expected. Even though the plot was quite promising and had a huge potential, the book just did not live up to the expectation.

What promised to be a brilliant plot falls flat due to bad editing, concurrent plot holes and inconsistency in characters. I could count almost three characters whose names changes in the course of the plot due to either spelling errors or the author took the liberty to change the name of the characters which were a synonym to the original name. What I would have preferred was if the author had taken the approach of a more dialogue-oriented story which would have added more clarity and thrill to the novel.

There is always light at the end of the tunnel and since I have been talking quite negative about this book, let's also talk about some positives. Yes, as I mentioned earlier, the plot does seem promising and if the author ties up some of the loopholes, the novel works quite well. Also, since it is the first of the trilogy, there is a vast room for improvement in his future novels. The main protagonist does seem to be larger than life currently, but if this can be handled in future novels, it could just add to the betterment of the character and the novels. So go for it, if you want to read something interesting but where you don't have to put too much of your thinking cap on it. Also, for a person who is a fan of Bollywood Masala movies, this won't be a letdown.

1/2 out of 5 (Hoping against hope, that the shortcomings are taken care in future novels)