NOT JUST WOMEN, EVEN MEN GET RAPED…. 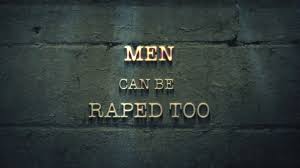 NOT JUST WOMEN, EVEN MEN GET RAPED….

Newspapers today are full of harsh realities. We witness many shocking news and horrifying truths on a daily basis. Apart from just being a news, rape has become the next biggest trending topic on social media. When talking about rape, our thought just goes like, only women are getting raped. But that isn’t so, even men get raped today and that is never taken into account here.

"Thirty year old man raped by two women", "Man faces harassment by another man", we could have rarely witnessed these kind of news in newspapers and social media. To be frank, news like this doesn't even get a space in small columns. But in real, the men who are affected deserve more care and attention.

For instance, just imagine, if a girl gets raped, we rise oppositions; we make the news viral on all social media platforms. One step above, we even decide how to punish the rapists by conducting debates on and off the face book. (At the end, rapists escape in 90% cases. But the point here is about the attention the victim gets if she is a girl.) But if a guy gets raped, will the same scenario arise? Will we support the person morally and emotionally?

The answer in majority of the cases is 'no', because we aren't still aware of the fact that men are getting raped too. Yes people, men too have the ability to give pleasure, and even they aren't spared in this beautiful society. "He is a man, how could he get raped?", "You are a man, can't you protect your own self??", "Don't joke, only girls get raped. Someone must have played a prank", these are the most common replies our society gives to a man, when he tells that he was raped.

The problem here is not about equality or suppressing female victims. It is just about the lack of attention which makes a male victim suffer. Pain, physical injuries, mental stress, traumas are common for both men and women after the incident. Brutal tortures, inserting sharp objects in private parts, the pain, tears, screams, everything occurs in men too. And for sure, nothing is over rated here. And in extreme cases, the victims even die. The only difference arises with pregnancy.

And that is why, the topic "males get raped" is not given much importance anywhere. "Does he get pregnant? Will he bear a child whose father's name is unknown? Will his purity get disturbed?", the answer for all these questions is a big NO, which again underestimates such rapes.

The harsh truth is, by just escaping from a single fact called pregnancy, the man gets stuck in a web of problems ranging from loneliness, pain, weakness, depression, lack of confidence and much more. The reason is very simple. Men are provided with more physical strength than women to protect them and help them. According to the victim, his mindset is like, "If I cannot safeguard my own self, then how will I protect my girl friend?", "Am I not fit to be a man anymore? Can't I get a peaceful life hereafter?” The man becomes so weak and blames himself for whatever happened. He starts doubting his own manliness and ability.

Another big thing is, many guys have a misconception that getting raped by girls is a big pleasure. But it's not so, a girl taking control of your body without your permission will hurt your self respect and ego to a great extent. And it is not about pleasure, it is about the pain for the moment, and for the whole lifetime too. Even scientifically speaking, no man in this entire world would love rape once he has gone through the worst incidents. All thoughts of pleasure and romance would turn into worst nightmares. In short, anything happening without your permission will never give you pleasure.

Now, who is the main reason for this? Both women and men are responsible for this. Sometimes a woman rapes a man out of her anger or for some personal reason, but a man forces another for sexual activity and calls them gay. Something which has been done out of force, can never be called as anything other than rape. Again our society immediately turns cruel against men. "She did it just for fun, may be she was giving you a subtle hint", "He was inviting(!!) you for a gay relationship, nothing else. Don't exaggerate." But if a woman gets raped and man gives justification like, "I was just giving her hints (!!) for sex, it's all a part of the game", then imagine how fires of rage and infuriation would burst all over the place. ( And, this is not meant to mock or degrade women. You face pain, so do they. You get support, but they don't, and that's the issue.) Even lack of laws in this nation pave wave for such cruel things.

A man doesn't need to prove his virginity or manliness anywhere. But to his own self at least, he must be bold enough. How could he concentrate in his work or support his girl if he doubts his own self? And people would surely ask, "Why can't he fight and save himself? He is a man." For your kind information, he is a man and this doesn't imply that he is a superman. Even if he knows karate and kick boxing, he can save himself only to the extent he can. (Same as girls, but here they resist a little longer, that is it.)

These thoughts coming to the light and men getting the rights they deserve and need is possible, only when these stuffs are taken seriously. Males who have been affected never come forward to complain, they neither talk about it with close friends or family. Because, our society hasn’t trained us to speak certain issues boldly. Long back, even girls weren’t allowed to talk freely against the harassments done to them. Only after countless ‘XXXX’ and other girls getting media light, these issues have got some attention. Feminists talk loudly about gender equality and male domination everywhere, but no one is there to talk about the issues men face.

Finally, what can be done? Men don’t get raped for the ‘inappropriate’ clothes they wear, the belly they flaunt with, the make up they wear. At lest then, they should be given the space to speak about the problems they face. We should stop seeing male harassment issues as funny stuffs or some rare things that has no chance of occurring. Anything and everything happens in this world, sometimes we don’t choose to see this kind of things. And then, it goes unnoticed forever.

The myth that, “boys can’t be raped" should be thrown out. If girls can get raped, then even boys can get the same.” Blame, guilt, devastation, these are all common for everyone. By speaking these issues out, a few people will mock. A few will support, but everyone will get the awareness about what is going on around them.

At least from now, let us learn to treat rapes equally irrespective of genders. Like welcoming new changes everywhere, let us welcome some change here too. May be, some more issues shall come to light and let justice prevail….