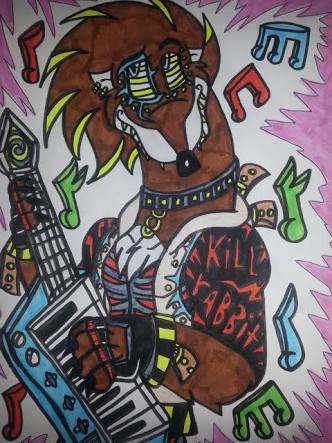 Plunk plunk goes the guitarist, possibly the most annoying out of all the instrumentalists in a band (Except for that one creepy person who stands in a corner, occasionally tapping the tambourine). Not just because of the fact that they’re usually the ones who bring in the ‘alt’ genre materials to the party/practice session (Jimmy Hendrix, Kurt Cobain, Eric Clapton… Surely it’s not a coincidence) but also because amongst acquaintances who try to shove music down other people’s throats, the guitarist surely takes the cake. (And eats it too if it’s a certain guitarist friend).

In fact, there is nobody more capable of placing Pink Floyd’s work in as high a category as them or religiously swearing upon the godhood status accorded to Dire Straits, even when in dire straits. (Except that pushy piece of software called iTunes). But this isn’t the most annoyi… erm, the most endearing aspect of guitarists.
Heaven forbid even the slightest mention of anything remotely pop from entering the radius of our acoustic aficionado, for that would result in a playlist crackdown of your collection. This would end with the friend seizing all those AT40 tracks stockpiled over the years, and dubbing it to be trash when compared to the classics from the past. And why is that so? Obviously, all guitarists are obnoxious by nature and that is why they continue to plague this Earths’ inhabitants in various ways. But why is it that such people are ever so certain about the veracity of the adage ‘Old Gold is the shiniest Gold’? Considering how instruments have only continued to improve, with the development of innovative methods of playing and their players themselves continuing to hone their skills true to age old traditions yet tweaking them to the needs of the people.

All evidence is contrary to the guitarists’ beliefs. Perhaps it has something to do with how they grew up. Their families might be fans of the so-called legends, thereby resulting in a background household OST that grew on them. But then again, perhaps the guitarists fail to realise that the reason for the filial fans was the ‘popular’ nature of the music that these very same legends made during their performing days. (Basically their pre plastic surgery days) Maybe the string Slash-ers believe that these oldies were pioneers in their genres during their heyday. In that case, they need to be reminded that pioneers are known for being the first, not the best at what they did. (Just like Neil Armstrong is remembered for being the first man on the Moon and Buzz Aldrin is remembered for being the first person to take a leak on the Moon. They weren’t necessarily the best at what they did, but nobody cares about that, which they should. Also keep in mind that music has only evolved with time.

Or it could just be the very same thing that results in racial supremacists being what they are. A narrow minded obstinacy based on hearsay. In this case, these people need our help and sympathy, along with a mix tape of Adele. Whatever be the reason for these particularly peculiar people to be what they are, that doesn’t mean that what we listen to isn’t bad. Or good. Vox populi, vox Dei. The voice of the people is the voice of God. So, pop music is popular music and there’s a reason for it being omnipresent (Nightclubs to classrooms to tapris) and omnipotent. (Name a chart that isn’t topped by a pop song.) It was chosen by God, you see. PS: The author has nothing against guitarists. Here, the word ‘guitarist’ alludes to self proclaimed music hipsters who shun the mainstream merely because it’s mainstream. There is a trend for guitarists to display this characteristic. Again the author is an absolute fan of guitarists and in fact plays only string instruments because of all the respect for guitarists.