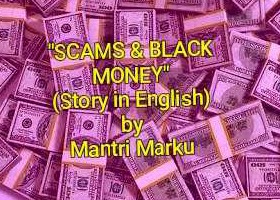 Life is such that one has to bear all these problems, if they commit blunders & mistakes. Since we have taken birth as a human being, how best one lead a good life is a multi-million dollar question.  Completing the life cycle by completing the family bonding with affection is equally important than earning the money in life.  Of course, earning money is necessary, but, one has to choose the right path to earn money to lead the life.

Earning money in right path is one aspect and earning illegally is another aspect.  But, it is sure that people who earn illegal money through corruption method shall land in problems one day or the other. There are many instances.  The illegal properties, cash & gold acquired by Government officials and business people through illegal ways sere confiscated by the Anti-corruption Bureau (ACB), Central Bureau of Investigation (CBI), Enforcement Directorate (ED), Income Tax Department (IT Dept), Revenue Department, Various Banks, Central Excise Department, Ministry of Finance, Reserve Bank of India (RBI), Ministry of Home Affairs (MHA), and other departments like Sales Tax Department etc.The people who are caught by these departments are booked under various sections.  Even in many cases, the properties, cash & gold are seized and confiscated pertaining to the brothers, sisters, close relatives, friends and distant relatives, in many cases. This is the big embarrassment to the main victim and culprits.

Most of the big corruption money is involved in big scams running in millions.  Such black & corruption money is kept in various private foreign banks in different countries.  If such black money & corrupted money is used towards building facilities like public toilets, government function halls, government malls, government free cinema theatres, and other pro-poor related facilities, it will be hailed by one and all. Of course  , this black money and corruption money belong to general public and common people. It is peoples’ money.  People are paying money in various ways through taxes. People are not living at free of cost.  There is no free food to people. Each one has to earn and eat in their livelihood.  The opportunities for earning substantial money are limited, unless otherwise one is reasonably highly qualified or prosper in any business field. Nobody can acquire huge properties in overnight, unless one is entangled in corruption methods.  Such corrupted people would be brought to book one day or the other.  At such time these corrupted people shall have to confront the serious allegations, consequences and are bound to land in four wall jails.  Government and its various departments, as aforesaid, would always watch such corruption crimes with third eye.  Watch & watch is always there in third country.  There are many “watch dog” organizations, whose duty is always to have vigilance over fraudsters and on corruption matters.

It is an open secret that many ministers, government officials both at Central level and at State level were involved and are involved in many big scams running into several thousands of million rupees/dollars/pounds etc, which had pushed the country’s economy into back-seats.  These scans reflect the poor economy of the country and ultimately the common man has to bear all the costs that may come in the form of taxes, increase in cost of living etc.  These scams, for example, to mention a few are – Bofor’s scam, coal scam, 2G Telecom scam, Indian Stock Market Manipulation scam, Stamp Paper scam, CWG scam.

It looks to be that the country’s political working system is stronger and powerful than the governance of various departments.  Sometimes, the government also drags on the various scams due to politicization of issues and involvement of top government supporting political parties and Midas touch top VVIPs leaders, who hail from inner circles of the government.

As everybody knew, various Government Agencies, Inquiry Commissions etc drag on the issues related to scams for number of years.  Even the ‘scan reports’ on any issued are submitted to Government, there will not be any further action and all such ‘Inquiry Reports” are sent to ‘cold storage’.

In such circumstances, ‘who will question whom?’ Who will ‘bell the cat’ for actions on scamsters? This is an unending subject.  At the end of a movie cinema, there will be ‘The End’; but, here in ‘scams’ there is no ‘End’. One will have to wait & watch for a bigger scam, to forget older scam.

But, however, huge public money and huge Government money is involved in each and e very scam.Ultimately common man is the sufferer.Who will blame whom? Who is answerable? How things will move? Is there any Government  strategy to stop future scams? How the Government handle the old scams? Is the Union Government and each respective State Governments are instituting any ‘special secret agencies’ or ‘secret investigation teams’ for bringing the ‘financial scamsters, fraudsters and culprits’ to Law Book? If so, how much time it will take to close the old scams? It is a matter to wait and see.

For stealing, forgery, illegal earning, cheating of country’s cash treasure financial resources and transferring the black money to foreign bank accounts, without the permissions of Ministry of Finance, Central Bank, FERA, FEMA etc tantamount to financial fraud financial irregularities and serious financial crimes which needs attention for criminal, financial, civil and other investigations to book culprits and to bring back such black money to India.  In such cases, culprits properties could be seized to enable pay back the Government/Public/Investors/Institutions money.  In these cases judicial involvement, Ministry of Home Affairs, Police Department and Civil Administration departments etc have the duty in the ‘black money recovery processes through legal system, as per laid down procedure.

Some leaders and political party big-wigs, when asked about the scams enquiry progress, they express some ‘crocodile tears feel face’ for the way the investigations are conducted at the Turquoise speed”

If this is the case and situation, then one can think 21st century will go and 22nd century will definitely come, many senior and aged political, civil and administration bigwigs and diplomats may vanish by then, and all these scam cases will disappear and become as “unsolved mystery scams”, due to “unknown & reasons beyond self-explanatory” and or persons involved in the scan “not existing on earth”.

Finally, The God only knew how these big scams would get conclude?