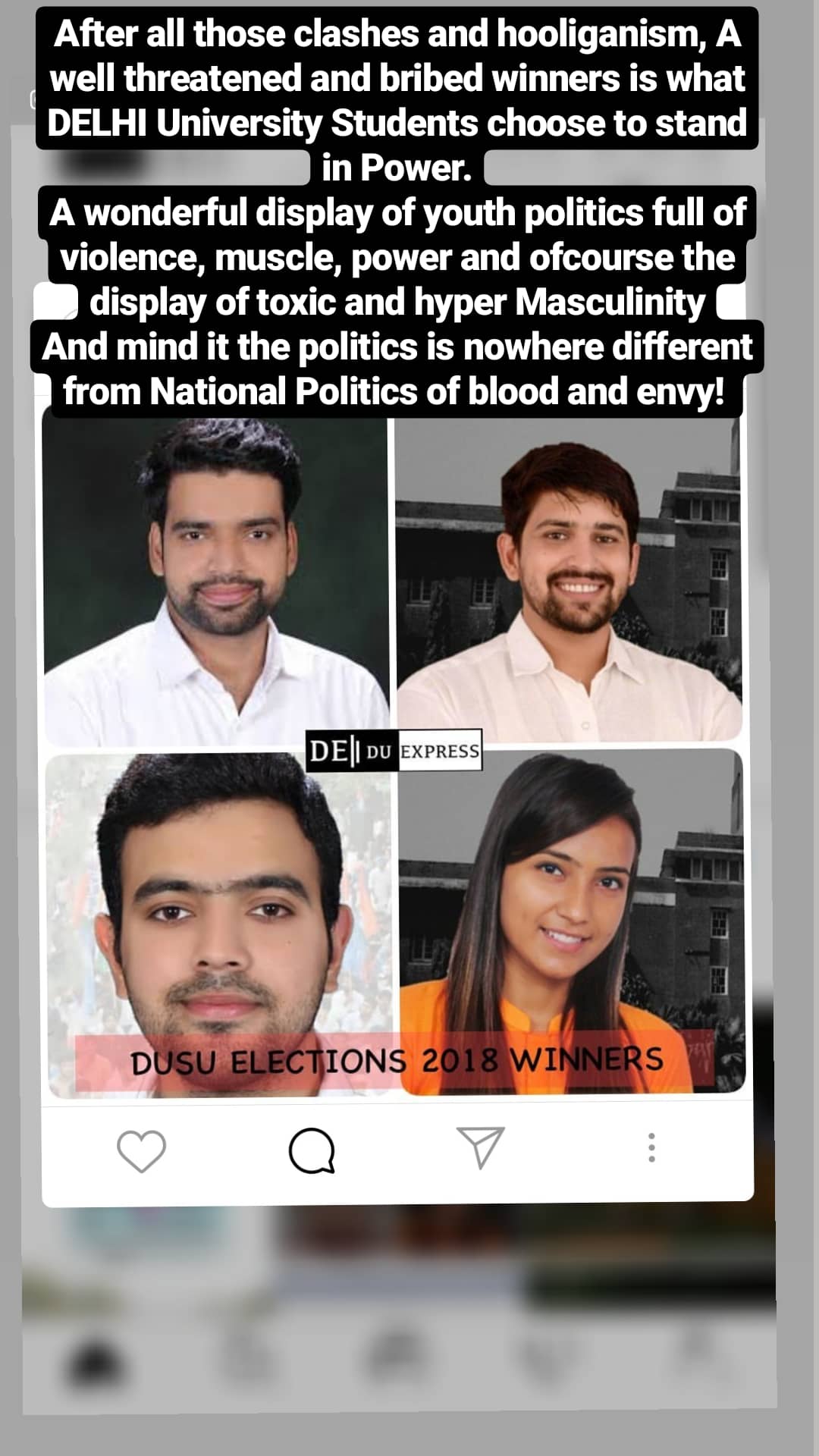 ‘The requirement for a masking tape on ‘Democracy’ is back again with full fervor’, this is what struck my mind when I saw publications and my Instagram and Twitter fuming with the DUSU Elections results. A comeback of ABVP by winning three seats : President, Vice President and Joint Secretary while a mere token representation of NSUI in the union with a seat of Secretary is what’s being posted everywhere right now.

Delhi University went through a massive series of campaigns , clashes and incidents that questioned the very purpose of Student’s Union in the last couple of weeks . And as I say and visualize it right now, it immediately disgusts me deep down to realize how typical muscle and power based politics has been displayed by the Youth who is apparently the future of the nation.

It’s the same old school politics that we had almost decades back. The same old politicization of issues, low representation of diverse groups, unsafe spaces around the campus, violence as a means to silence freedom of speech and expression, pretending to be saviours of democracy when in reality the fact remains ‘Jaisi Sarkaar Waise Akhbaar’ *pun intended.

I remember few days back I volunteered to cover the campaign with a media organization, the entire notion of politics and masculinity being aligned together and the idea of issue based politics getting blurred under the pressure of hooliganism and money and power made me cringe every minute I was walking around my campus which did not even look like mine for the reasons known by now.

That one question which kept on rolling in my mind was

“How this youth politics was anywhere different from the national politics?”

It was all very synonymous in a manner that the candidates wearing a number of garlands was trying to wither away from issue based politics to focus on their popularity and devising ways to buy votes, no matter how.

The candidates played the same old women and caste card and ran a campaign full of litter around in the campus which they did not even have to worry to clean next morning.

I could only calm myself down when I threw a big stack of pamphlets in the dustbin which would have anyway been used to litter roads in the end.

So yes when the results are out and we know the shirkers of democracy are back, I’m not pessimistic but it does not give me much hope also to see a safe, inclusive and democratic campus. I would want my expectations to not be short-lived.

The question remains that Will this turn out to be a well deserved victory in the next one year? Or

Would prove to be a well threatened and well bribed and corrupted win?

The benefit of doubt remains with the newly office bearers of DUSU.