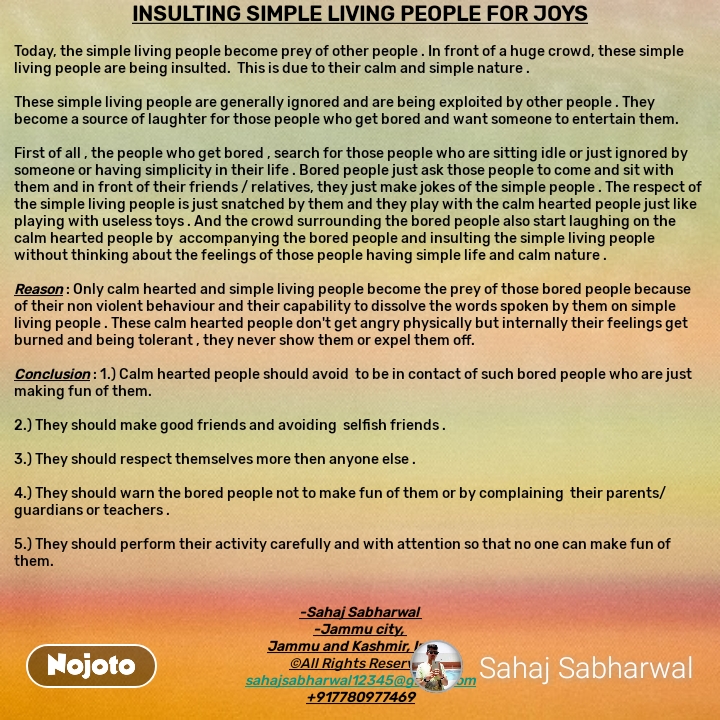 These simple living people are generally ignored and are being exploited by other people . They become a source of laughter for those people who get bored and want someone to entertain them.

First of all , the people who get bored , search for those people who are sitting idle or just ignored by someone or having simplicity in their life . Bored people just ask those people to come and sit with them and in front of their friends / relatives, they just make jokes of the simple people . The respect of the simple living people is just snatched by them and they play with the calm hearted people just like playing with useless toys . And the crowd surrounding the bored people also start laughing on the calm hearted people by  accompanying the bored people and insulting the simple living people without thinking about the feelings of those people having simple life and calm nature .

Conclusion : 1.) Calm hearted people should avoid  to be in contact of such bored people who are just making fun of them.

2.) They should make good friends and avoiding  selfish friends .

3.) They should respect themselves more then anyone else .

4.) They should warn the bored people not to make fun of them or by complaining  their parents/guardians or teachers .

5.) They should perform their activity carefully and with attention so that no one can make fun of them.