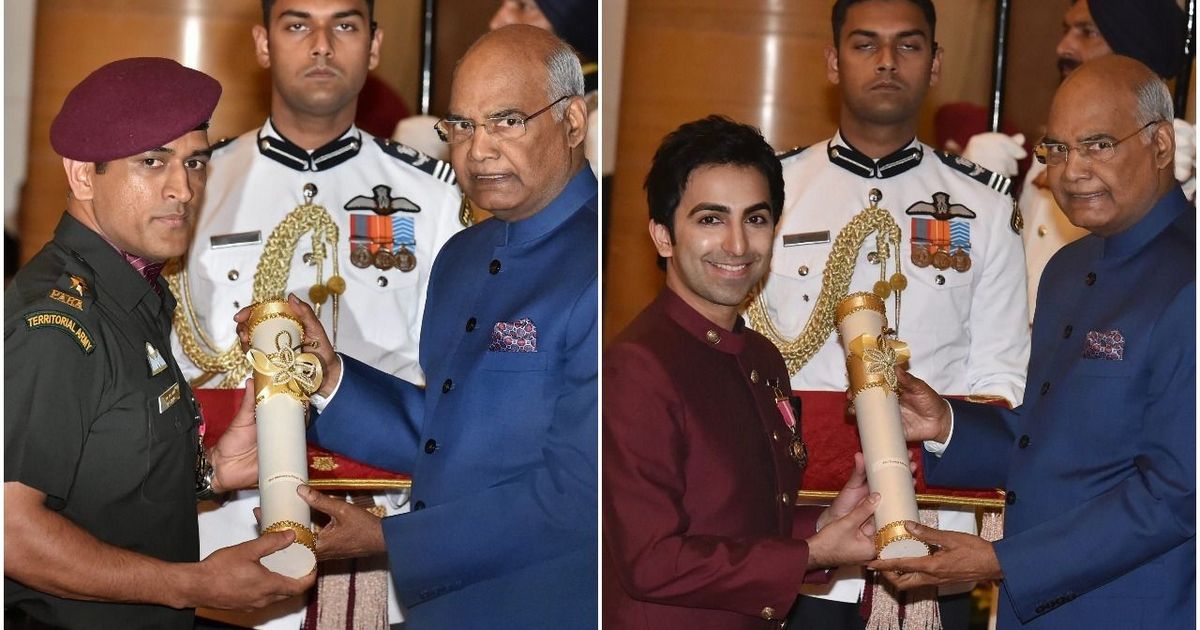 The best finisher in the sport and one of the highest rated keepers of all time. Yes, our favourite captain cool

Mahendra Singh Dhoni received country's third highest civilian award, Padma Bhushan, from President Ram Nath Kovind on Monday. The very same day, when India won the World Cup under his captaincy in 2011 and became the first country to win the world cup on its home soil.

He wants to join Army after retirement. Territorial Army has given the honorary rank of lieutenant colonel to M.S.Dhoni and thus, he received the award in the Indian Army uniform. As his name was announced, Dhoni marched past the dignitaries present at the Rashtrapati Bhavan before receiving the honour from President Ram Nath Kovind. In his own words: it's always been about serving the country.
Apart from Dhoni, multiple billiards world champion Pankaj Advani also received the award for his extraordinary achievements. Advani, 32, has ruled world billiards for several years. The Bangalore-based cueist has won 18 world titles. Ace cueist Pankaj had claimed the IBSF World Snooker Championship title in November last year.

Dhoni has been the recipient of many awards, including the ICC ODI Player of the Year award in 2008 and 2009 (the first player to win the award twice), the Rajiv Gandhi Khel Ratna award in 2007 and the Padma Shri, India's fourth highest civilian honour in 2009. Considered as the country's most successful cricket captain, Dhoni led India to two World Cup triumphs -- in the inaugural ICC World Twenty20 held in South Africa in September 2007 and the 2011 ICC ODI World Cup. India also won ICC Champions Trophy under him. It was under his captaincy that India climbed to No. 1 in the ICC Test Rankings in December 2009.

Advani also has a distinguished career, having won gold twice in Asian Games in 2006 Doha and 2010 Guangzhou. He is also a multiple world champion.

On Tuesday, Dhoni took to social media to share his thoughts on what the 'uniform' means to him'

"An honour to get the Padma Bhushan and receiving it in Uniform increases the excitement ten folds. Thanks to all the Men and Women in Uniform and their families for the Sacrifices they make so that all of us could enjoy our Constitutional Rights. Jai Hind," he wrote in the Instagram post.

On April 2 in 2011, India won the World Cup final against Sri Lanka. With 10 balls to go at the Wankhede Stadium, the then-captain Dhoni ended India's 28-year wait with a massive six.

Dhoni has been the recipient of many awards, including the ICC ODI Player of the Year award in 2008 and 2009 (the first player to win the award twice), the Rajiv Gandhi Khel Ratna award in 2007 and the Padma Shri, India's fourth highest civilian honour in 2009.

The Padma Awards are one of the highest civilian honours of India announced annually on the eve of Republic Day. The Awards are given in three categories:

The award seeks to recognize achievements in all fields of activities or disciplines where an element of public service is involved.

The Padma Awards are conferred on the recommendations made by the Padma Awards Committee, which is constituted by the Prime Minister every year. The nomination process is open to the public. Even self-nomination can be made.All persons without distinction of race, occupation, position or sex are eligible for these awards. However, Government servants including those working with PSUs, except doctors and scientists, are not eligible for these Awards.

The recipients are also given a small replica of the medallion, which they can wear during any ceremonial/State functions etc. if the awardees so desire. The names of the awardees are published in the Gazette of India on the day of the presentation ceremony.

The total number of awards to be given in a year (excluding posthumous awards and to NRI/foreigners/OCIs) should not be more than 120.

An unwritten rule is that generally, 10 years must pass before someone gets to get a higher Padma category award.

Here are some quotes from Mahender Singh Dhoni, which simply speaks about his golden  heart:

The secret behind his 'coolness'.

No wonder why we love him so much.