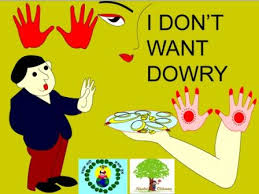 It refers to the durable gifts,cash,real or movable property that a bride's family gives to the bridegroom,parents and his relatives.It is a common practice in India a tradition which dates back to centuries.The origin of dowry has been greatly debated,it states daughters were 'given' away and the grooms were given gifts and gradually money to ensure fair treatment for women.The amount of money given depended on the groom's social status and education.It still continues in the present day and it is a bribe for a marriage alliance.The more the education of the boy more dowry is demanded from the bride's family.Though both boys and girls are well educated and on equal footing,yet dowry is given to the boy's family leading  to a financial burden on the girl's family.It has been illegal in India since 1961 yet it is prevalent.

A spate of deaths linked to dowry have come to the fore.Though it is illegal yet there is no sign of the system abating.It is like a canker gnawing the society.Women commit suicide due to dowry harassment and some are murdered by their husband and in-laws due to insufficient dowry.About 8000 dowry deaths are recorded each year in India,this is prevalent in  all the societies whether modern or rural.

Two women in their 20s committed suicide over dowry harassment on the same day last month in Gurgaon, a modern satellite city of Delhi, where the number of dowry deaths rose from 12 in 2015 to 20 last year, according to the Times of India, an increase of 66.7 per cent.In another case reported  in Hyderabad, a 21-year-old woman died after her husband and parents-in-law poured kerosene on her and set fire to her because of a dispute over dowry.

A software engineer in Hyderabad was reported to have hanged herself after being harassed for dowry payments by her husband, even although her family had already given him land and substantial amounts of gold and cash at the time of marriage.A school textbook caused an uproar in the state of Maharashtra  because it stated that it was very difficult for “ugly and handicapped” girls to get married and the bridegroom’s family would demand higher dowries in such cases.

“Once you pay a man and his family for getting married to him, you may always be expected to pay more money. Since you don’t have money, you have to take it from your old and ageing parents, putting further pressure on them. It’s a never-ending cycle of unnecessary debt.”This plague is never ending and puts pressure on girls' parents.

Under Indian law, those who give and those who receive dowries are liable to fines and imprisonment.

Dowries have traditionally been used in Indian marriages because the bride’s family is expected to compensate the bridegroom and his family for the financial support the groom would have to provide throughout his wife’s life.

The police should receive more training to deal with such situations,  “It’s a social problem, so ultimately it’s up to us to reform.”

It wasn’t until later in the twentieth century, when women’s rights groups were campaigning strongly against dowries and former Indian Prime Minister Indira Gandhi organized the marriage of her son without accepting a dowry from the bride’s parents, that the public really took notice, leading to an amendment of the Anti-Dowry Act in 1989 and public enforcement of the law. Among other initiatives, the government established an all-female police taskforce in 1992, set up with the sole purpose of investigating dowry dispute-related abuse or deaths. There are now more than 300 of these police taskforces across the country.

“It should be a compulsory matter of self-respect that woman earn their own living, not a choice. Only then will we be able to overthrow this old and detrimental custom.”

We need to take stringent measures to get rid of this system,change our mindset and stop the tentacles of dowry to take over the society.