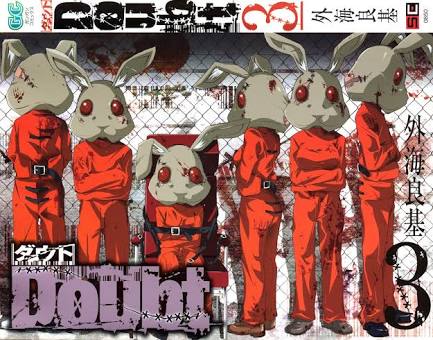 
A group of rabbits used to have fun playing games and lived together happily. One day, a wolf disguised itself as a rabbit and snuck in under the pretext of being their friend. When the rabbits would fall asleep, the wolf would appear in its true form and kill the rabbits one by one every night. Not knowing what to do, the rabbits held a meeting to address the matter. They decided the one among themselves who was most likely to be the wolf and killed it. If they chose correctly, the rabbits would win. If not, the wolf would keep picking them off one by one. This is the basic plot of “rabbit doubt”, a game played among the youth where a group of people convene to play by the aforementioned rules. A group of rabbits where one is given the role of the wolf. However, this amazingly thought out manga by Yoshiki Tonogai takes a turn for the worse when Yuu, Mitsuki, Rei, Hajime, Eiji and Haruka, people who often play the rabbit’s doubt together decide to meet up for a good time, but are instead captured and forced to play the game by the dark, bloody rules that underlie this seemingly innocent activity. They wake up in an abandoned building with a barcode on each of them. They move around in the house trying to find an escape route but end up finding Rei nailed to a wall. Doubt and isolation make friends turn against each other, making it easier for the wolf to carry out the Devil’s work. The wolf has already made his move and has claimed his first victim. Who could the wolf be? And can they be stopped before they strike again?