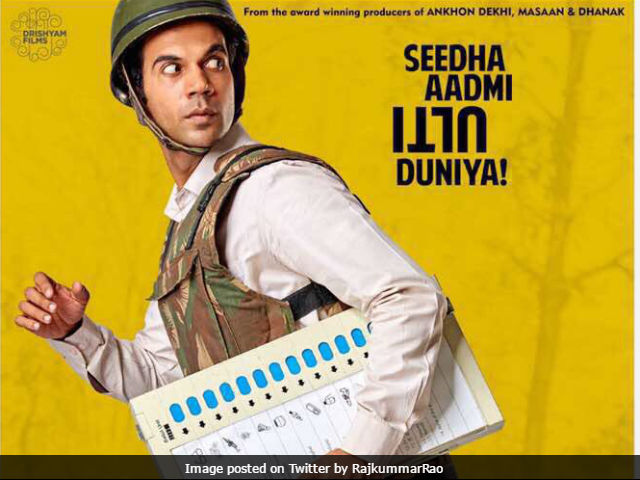 Representation of Nation, class, caste, and gender perfectly summed up in this look-a-lot-like-Physics (trying hard not to be a spoiler!). Well, there is no physics in it except the protagonist name. NEWTON as the name suggests, beautifully explains the law of gravity to equality as to how nature treats everybody equally. Rao portraying the character very well thrives for it till the end. Although, Rao also seems to be m.sc in physics( the only similar thing between the real and reel name).

He belongs to the Dalit family but he endorses values which for all these years in Bollywood cinema were portrayed by the upper caste characters. The Dalit character emergence- archetypes are a sure signal to the changing times of Bollywood. The film ruptures the conventional norms and stereotypical representations blindly followed by the people. It also talks about how a girl child is meant to be just married. Nothing is worse than being a girl and that too from a minority or lower caste society and uneducated. Nothing. Newton tried to explain how the practice of early marriage, uneducated and dowry should be denied and not accepted in the country would solve half of our problems of gender and caste issues.  Castism, social hegemony and the rich-poor disparity seems to be the roots of our country which have messed up and are an obstacle to the progress of our country.

WORKING SELFLESSLY FOR THE COUNTRY:

The movie points how the public is targeted, manipulated in the name of technological advancements when the basic amenities such as education, healthcare, electricity seems to be talking in the prayers. The movie revolves around the election process in our country, the background working which constitutes the sick mindset of people but how they still abide by the rules... to make the rules true, there is so much to prove and make it seem true after all that's what meets the eye. On the contrary, Newton (Rajkumar Rao) was a dedicated officer. He refrained from the typical government officer image we perceive. The movie also tries to teach how rules and regulations are in our hands. They are our responsibility, in fact, working for your country is working for yourself and not some moral obligation. It is the moral duty of a person.

The Naxali surrounded area of our country has always been sidelined. The locals residing in this area are terrorized both by the police and the Naxals. We treat it like another country. In the movie, Newton questions the army officer when he refers to the Maoists area as Pakistan.  Surprisingly, the officer wasn't able to answer. This very seen depicted how hate gives birth to hate. We all seem to be fighting and hating each other but the real reason seems unknown and is left unanswered. The one dialogue which is so irrelevant yet so deep,'Jhande aur dande se hee kaam chalta hai.'

The booth camping, forcefully snatched locals to give their votes as the foreign journalist was there to witness the Indian Democracy show. Truly, Indian democracy stands strong at all times, after all, they voted for the leaders they have never seen and known and they were forced to vote by their saviors.

The film deals with the hopelessness significantly relevant in the eyes of the locals. The anguish, hatred and the invisible yet clearly visible boundary of indifferences and disparity.

The film makes us wonder...how successful have we been, as a citizen...as a public. We spend hours debating and spreading hate on the various topics where we think our country is failing. Blame the government- blame the locals- blame the country. The day we start working on ourselves and our deeds as a responsible person we will be left with answers and that is the sole method of bringing the change we want to see.