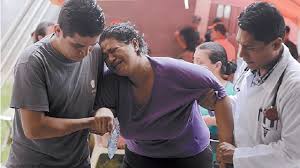 The word' Chikungunya' comes from Makonde language spoken on Makonde plateau where the disease was first seen.It means 'that which bends up.''to become contorted' or'to walk bent over.'This describes the stooped appearance of patients due to joint pain.It was first described during an outbreak in TANZANIA in 1952.Then another outbreak took place around The INDIAN OCEAN in 2005.It was considered a tropical disease.Later in 2007 outbreaks took place in ITALY, FRANCE, CROATIA etc.More than 60 countries have identified the outbreak of this disease.

Like dengue this is also a mosquito-borne viral disease.The disease is not fatal but the joint pains are awful and people find them unbearable.The fever and joint pains can last up to several years.The pain is debilitating and can make walking difficult for patients. The symptoms are similar to dengue and zika and diagnosis becomes difficult.

Chikungunya is caused by the bite of Aedes aegypti and Aedes albopictus mosquito.It is transmitted from one person to the other by the bite of female species of the mosquito.They bite during the daytime, during early morning and late afternoon.

Symptoms appear within a period of 4-8 days after a person has been bitten.Sometimes they appear after 2 days.Doctors feel the virus has mutated and there is more severity in the symptoms.

The main symptoms are---

Joint pains which affect finger joints on hand and foot leading to swelling and acute pain.Pain can persist for months or years.But patients do recover in few cases the pain persists. In aged patients it may cause a fatality.

Slather the skin with mosquito repellents where the skin is exposed.

Don't let water accumulate and keep a check on the surroundings.

Use mosquito nets while sleeping.

Keep toilet seats covered when not in use.

After shower do not use perfumes as mosquitoes are attracted to scents.

Use mosquito repellents which contain DEET.

Grow marigold and lemongrass they are natural repellents.

A blood test can diagnose chikungunya.

No specific drugs are there to treat the disease.Only Naproxen,Ibuprofen and Acetaminophen are used to ease fever and joint pain.At present no vaccine is there to prevent   the disease. Homeopathy has shown wonders in curing the disease..Medicine like Polyporus is very useful.