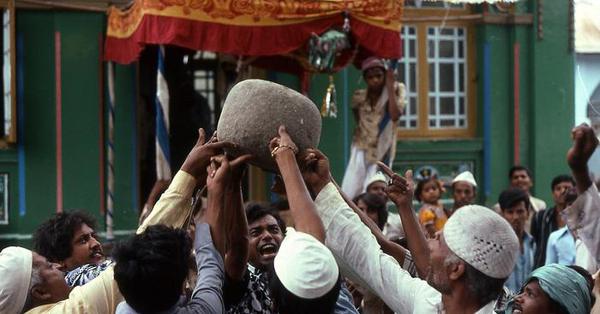 India is a land of supernatural elements and gurus belonging to all devotions and religions. Every spiritualist, whatever might be his religion, has sermonized forbearance, passivity, love, and respect. No wonder, the seating places of such diviner have transformed as much into places of pilgrimage as places of worship and other temples.

Humankind is yet not responded to a lot of incredible and astounding natural and paranormal elements and activities. At times these are named as “Divine” and otherwise as “Miracle”. It is mostly the belief of people which toils and that bigheartedness is also described as “Godly”. There are abundant instances and stories surrounding us which are in fact mysteries as to what precisely can be the cause or clarification of these stories. One such true tale is at Shivapur, 180 km from east of Mumbai.

The Dargah of Qamar Ali Darvesh

Story Behind This Levitating Stone

It is believed Qamar Ali was born into a family of ordinary Muslims whose men folk delighted themselves on their muscular powers. Qamar Ali was the youngest of the brothers in the family. Contrasting to his elder brothers, Qamar Ali was tender and self-reliant and soon became the follower of a Sufi Pir(great teacher). When he was hardly six, he became a disciple of a Sufi Pir who lived nearby and spent his days in meditation and fasting.

Qamar Ali was a renowned Sufi Saint and was famous for his wonders. Afterward, he himself started getting devotees and was acknowledged for his miraculous powers and curing.

It is believed that some eight hundred years ago a gymnasium stood on the spot where the shrine now stands.

Two large stones were used by the wrestlers for workout sessions. Being not curious about these tasks Qamar Ali was always targeted by the rest of the boys. It is said that this stone has been located by him to establish that spiritual power is greater than brute force.

At the time of his death, died in his late teens, he appealed that a spherical stone weighing around 200 pounds, be placed near his burial chamber.

What is so special about this stone, you may ask. According to the legend, he said: "If eleven men place their right index fingers under the stone and then jointly call my name, I will cause it to rise higher than their heads."

“Otherwise, neither singly nor together will they be able to move it more than two feet off the ground.”

Strange but true. From that very day, the stones could be elevated in the recommended method only by implementing that formula. Marble steps guide to the Dargah (shrine). Qamar Ali Darvesh was pure and in yielding to his chastity, women are not allowed inside the tomb. Stories suggest that over the years many people have tried to clear away these stones from the shrine but they have to endure dare consequences. It is not yet scientifically or rationally verified. But you can try out whatever way you want and see if you can cleanly lift it off the ground.

This message of brotherhood, fellowship, and companionship is still shown today when eleven persons from a different social stratum, caste, and creed and lift the circular stone with their right index finger they are able to raise it beyond their heads. They also have to lift it at the sound of “Qamar Ali Darvesh”.  If at all you try any other permutation or combination the stone cannot be moved beyond two to three feet. Some call it a miracle, some call it the message of Allah and some call it the blessings of Qamar Ali Darvesh. Though there are people, especially scientists who gave their logical reasoning of the center of mass and gravity-defying laws but in front of the faith and belief of people nothing stands.

Whatever be the reason, one thing which is significantly valid here is the message of brotherhood which was taught centuries ago by the Sufi Saint and, still today, it holds the same.