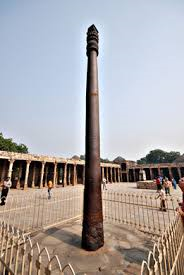 The Iron Pillar stands at 7.3 metre tall with one metre below the ground. Its height starts at 48 centimetres at the base and decreases to 29 cm at the top. It weighs around 6.5 tonnes and was created by forged welding. It is right in the middle of the Quwwatul Mosque and one of Delhi’s most incongruous structures. Also inscribed on the pillar is a message that proclaims it was a made in honour of the Hindu God (mostly Vishnu) and in the memory of Chandragupta II the Gupta king. No one knows how the pillar was transferred to its current location. The pillar that is made of 98% wrought iron has stood for 1,600 years without decomposing and thus accentuates India’s achievement in metallurgy.

Though it is slightly rusted the fact that it is beating science by still existing is mysterious. One of the reasons could be that it is not very humid in Delhi. It could be the skill of the men who made the pillar, and the material they used. There was also a material ‘misawite’ that was apparently used as a protective coat but it comes up only in conversations about the Iron Pillar so it’s rather hard to believe that the material exists.

Like so many other mysterious objects, the Iron Pillar is not giving up its secrets easily and some, sadly, may be lost to time forever. Someone may have erased the answers to the Iron Pillar’s mysteries from the pages of history hundreds of years ago, never knowing that people would eventually forget. War or a natural disaster could have claimed the pages of history necessary to explain this strange artefact or the pages simply never existed. Alternatively, the information is still out there waiting to be discovered, through analysis of the pillar itself or rummaging through India’s rich history.

There is no specific purpose of the Iron Pillar. The two main rumours are:

It was a flagstaff that was made for the kind in the inscription.

It was a sundial in Madhya Pradesh.

Although there is no evidence of who or why the pillar was shifted it has been a part of Delhi for a long time.

The Iron Pillar remains mysterious till date probably because someone might have erased its secrets from history not realising people may forget. Natural causes like earthquakes or floods or even war could have destroyed them. Its secrets can be found by examining the pillar or by going through India’s history.

The Indian Institute of Technology, Kanpur (IIT-K), is all set to bring about a revolution in the construction industry through the phosphoric iron, developed by its faculty member. IIT Kanpur is ready for a change brought out by a faculty member, R Balasubramaniam who is bringing about a revolution by developing a novel phosphorus containing iron which would be corrosion resistant and long lasting.

For eons, people have been using been using carbon containing iron there was no focus that was specifically given to or to the Iron phosphorus alloy system, which was utilised during the Ashoka period (4th century BC) in the construction of the historical iron pillar, presently installed at the Qutub Minar.
Balasubramaniam and his students researched on phosphoric iron pillar and found the pillar ductile and corrosion resistant in atmospheric and concrete environment.

The Times of India, in its April 24, 2004, edition had first carried the news, ''History comes to aid of chemistry in beating rust,'' when the IIT team began its research.

Balasubramaniam told TOI on Monday that corrosion resistance was a primary requirement of iron bars used in the construction industry.

He said that people have been practising several corrosion mitigation methods, including epoxy (polymer) coating on iron bars, adding inhibitors to concrete mix and cathodic protection measures. "All these measures might postpone the corrosion, but cannot prevent it permanently," he added.

He also said that the best way to beat corrosion, was to develop a material which itself produced corrosion resistant surface film. Warning against the deadly effect of chloride on the surface of steel bars, he said that chloride which deposited on normal iron through moisture or other means, accelerated corrosion attack, ultimately leading to severe cracks on the structure.
He further said that laboratory experiments have revealed the superior resistance power of phosphoric iron as compared to normal iron during attack by chloride ions.

The protective film took form within three years after erection of the pillar and has been growing ever so slowly since then. After 1,600 years, the film has grown just one-twentieth of a millimetre thick.

The protective film was formed catalytically by the presence of high amounts of phosphorous in the iron—as much as one per cent against less than 0.05 per cent in today’s iron.

The high phosphorous content is a result of the unique iron-making process practiced by ancient Indians, who reduced iron ore into steel in one step by mixing it with charcoal.

Modern blast furnaces, on the other hand, use limestone in place of charcoal yielding molten slag and pig iron that is later converted into steel. In the modern process most phosphorous is carried away by the slag.

A saying of the Buddha, cited from the Dhammapada, serves as an epigraph:
“As rust, sprung from iron, eats itself away when arisen, even so his own deeds lead the transgressor to states of woe….”

The pillar is a living testimony to the skill of metallurgists of ancient India.