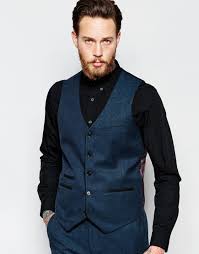 The waistcoat (or vest) was a formal garment, introduced by King Charles II in 1666, during the Restoration of British monarchy. The name emerged from the length of the garment ending at the waistline, whereas the other coats were longer.

This was a kind of foundation garment, with a triangular cut in the front centre. It was worn in the same colour and fabric as the suit, maybe with a different fabric used on the back. The neckline was a V-shape, and it could either be single or double breasted.  The single breasted style was essential for  lounge suits. The pocket was used to hold the pocket watch, with the other end on the button placket.

A dressed down look can be created with the waistcoat being in a different colour than the suit, like black or blue with grey. A waistcoat with trousers and a tie, gained acceptability as semi-formal wear. A bow-tie is recommended, as it does not crowd out the triangle near the neck. However, both kinds of ties are acceptable.

The hooded waistcoat, or waistcoat with jeans can be sported by the young, for the ultimate swag look.

In Britain, the Royals were expected to leave the last button open, to ensure ease in riding a horse or being seated on a high chair. The trend continues, and in the contemporary world, it suits the man with an expanding waistline.

The waistcoat, if worn without a jacket, evens out the lines in the outfit. It conceals the slightly puffed out shirt near the waist.

The waistcoat should ideally cover the belt. The shirt or belt being exposed at the bottom of the vest, is not an acceptable look.

One can consider the use of suspenders, instead of a belt, as it reduces thickness on the waistline, and the vest falls straight.

Ideally, a waistcoat without a jacket should be worn by men with a well-toned body. Any variation in shape at the midriff, creates an uneven look.

Indians sought inspiration from the Jodhpuri Bandhgala suits, and cross-border fashion influence, to create a dandier version. This has a high neck, is available in several colours, finishes and fabrics, and can be teamed with formal trousers, jeans or kurta-pyjamas.

It is ideal for the tropical climate, and provides ease, style and versatility to the wearer. It works for both the day and evening looks. A pocket square looks elegant, and breaks the monotony of the rectangular shape.

Nikesh Arora, President of SoftBank, gave it an extra shot of credibility, by sporting it in the Economic Times Awards Ceremony. The ET annual event is a congregation of the topmost bankers and businessmen of the country. 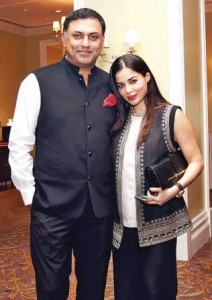 The waistcoat has traversed the distance from ‘vintage’ to ‘classic’.  It indicates the change in male fashion trends from stiff, formal and boring, to cool, soft and relaxed. Indian men are not afraid of being themselves, any more.

Have a look at some versions.

5. The Long Waistcoat – Indian version of a 4-piece suit

Carry on, guys ! Claim your style and your freedom.