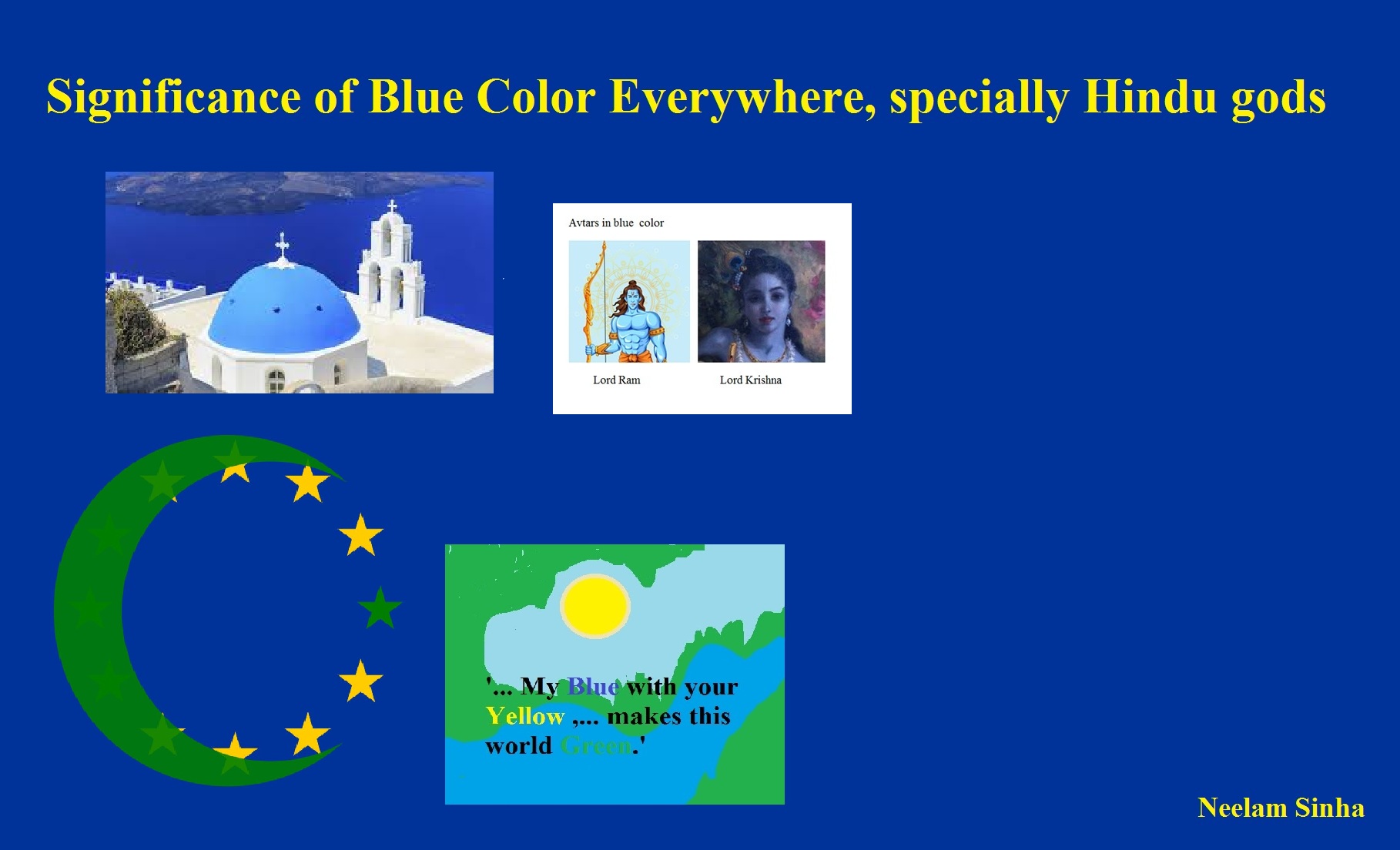 It is not just specially Hindu gods but symbol of Judaism, Christianity, Christ eyes, Game of thrones’ Dead Walkers’ eyes, Columbia company’s symbol lady with blue cloth… the color blue is running like a blood line … creating a mass psychosis.

But listen Blue, what it says,

(2)The blue color of Judaism.

(3)Look at the eyes of Jesus Christ, it is blue.

(4)The blue is another word for royalty.

(6)Blue is found in all civilizations.

(9)Now in Game of Thrones [GOT] we see color blue for dead people’s eyes.

First, we must know that blue symbolizes truth, and the need of god arises in masses for masses. So the gods are created by masses for masses. And we all know an avtar comes for Dharm Santhapana that is for the establishment of ‘Law & Order’ for masses. That is why it is masses who worship them, not few only.

But two true but totally different Ideas, will put us on a never ending war(remember we are on war already). So what is the solution to end this war?

The herds needs yellow (a cloth, an idea/a wisdom) and the wise(only few always) is already wearing blue (The My Truth).

Thus, it is my blue(my truth) with your yellow(your idea or your way) which makes this world green because we cannot live alone.

We see that the Avtars (major Avtars Ram &Krishna) come for Dharma Santhapana, bringing law and order for living beings, brining an idea so that we can live in harmony and peace. Thus we see Vishnu wears yellow cloth. Color yellow the symbol of wisdom. The major Avtars of Vishnu, Ram and Krishna both wear yellow.

Their ideas are there to serve masses, to show the right path to masses not few. The idea is brought in to ‘Tame the Mad Bull aka masses’, to save the few from masses, the masses who have gone into ‘a mass psychosis’… imposing their will on all, affecting one after other like a virus affects, creating a fission reaction, becoming a cancer by imposing their will on whoever comes in their path, the path which they followed as a true path of salvation, shown by an avtar, the shepherd to his herd who seemed them true=Blue. So we have color blue for not just Avtars/hindu gods but also in all civilizations.

But the ‘Me too Movement’/‘Resident Evil’/‘Demons’/Dead Walkers of GOT/the Jews of ‘Passion of Christ’ and many more and Us: the masses all represent a mass psychosis. Following a path, forcing our will on other like Dead Walkers of GOT for we are “lost”, because we want to remain lost. And can not see anyone alive,… of different color : of the idea (yellow) because another color new color irritates us, makes us restless... in a very simple term I DO NOT WANT TO GO INTO LIGHT… IN SUN/INTO NEW IDEA BECAUSE … ‘it melts, it awakens my frozen existence, frozen by tradition and ancestors.’

So, we want to make all blue eyed because my truth is truth(blue/fresh) rest are false(yellow/autumn).

[Eight religions bring 8 living-ways or invisible handcuffs(The Tradition) to ‘CIVILIZE’ the special animal called Homo-sapiens. The intellectuals or feelings or Darwinian struggle for their freedom, for their survival because ‘YOUR TRUTH CAN NOT BE MY TRUTH, because YOUR BLUE CAN NOT BE MY BLUE, SO WHY I WEAR YOUR CLOTHS? ’]

See below picture of Matrix

Like matrix we are in torn cloth(rotten idea), and we want a new one .. the new idea… new truth …