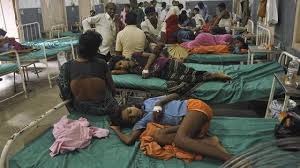 I was writhing in pain, due to the stomach paroxysms.I was unable to stand  and soon my family seeing my condition rushed me to the nearest hospital.We had just been posted to this small city in Madhya Pradesh and had little idea of the medical aid.Being new in the neighbourhood we had not been able to acquaint ourselves with the people,so had no idea whether the hospital had all the modern amenties.It was a decrepit looking place, with plaster peeling,walls betel stained,dim lights and gave an overall shoddy appearance.As soon as the paperwork was completed I was admitted in the emergency ward and a doctor was  summoned to examine me.The doctor an aged fellow, took my pulse and B.P and then wrote a big prescription which included drip,injections,array of pills and a battery of tests.He had advised hospitalisation for a week.I was in despair but had no choice.From the emergency ward I was shifted to a private,a/c room  which costed 5000/day.The room had low standards of hygiene,the bed sheet   was torn and had turned yellow with constant use.The a/c refused to work as I sweated in the summer heat.The source of entertainment a small t.v which was a pain in the neck as the remote refused to change channels and the disturbance on the t.v screen gave you a headache.Using the loo was perhaps the worst as the W.C was cracked,it leaked,the floor was grime laden and the basin had roaches running to and fro.I being a stickler for cleanliness abhorred the place. The room was infested with lizards and mosquitoes.I requested the staff to clean the room but the sub-standard cleaning agents didn't help much.The couch lying at one end of the room ,where the caregiver could rest was so uncomfortable that it became impossible for my caregivers to take rest.The food provided to the patient was insipid and unhygienic, so I got mine from home.The one week was a harrowing experience as I had to undergo immediate surgery and the facilities were deplorable.Bribery was demanded by the nursing and lower staff at the time of discharge.The hospital was  like a metered taxi where the  bill kept escalating.