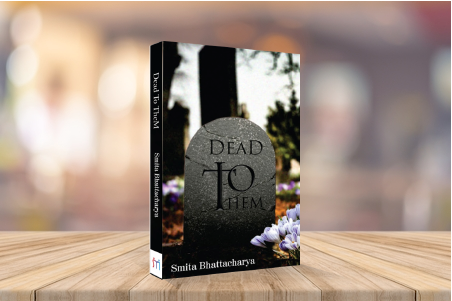 Moira Madhwa cannot be found. She is not in her flat, has not been coming to work and is not answering her phone. As her friends start looking for her, they realize nothing is as it seems. Skeletons tumble out of closets, dirty secrets are revealed and each wonders if the other had something to do with her disappearance.

Is Moira dead or alive? Kidnapped or murdered? Where is she? And most importantly, who among them doesn’t want her found…the one with the most to lose…

Dead to Them is a 65,000-word psychological thriller novel that weaves a web of dangerous games, lies and paranoia. Set in the city of Mumbai, it is an account of how mundane, everyday lives can turn upside down just by the triggering of one incident.

Moira Madhwa hasn’t come to office in days. Her colleagues ask around for her but are not too bothered, at least not in the beginning. Their work involves staying away from the office for long periods of time and this is not the first time Moira had done something like this. But one among them, Kavya, is worried, and as she begins to investigate, she realizes despite Moira’s brilliance and success, all was not good at work. She had a difficult relationship with their boss, Himanshu, with whom she had an affair in the past and who wanted her out of the firm. Himanshu also has a reputation for violent temper and his estranged wife has accused him of attempted murder. Moreover, Moira’ colleagues resented her success and closeness to Himanshu. Did any of them hate her so much as to want her dead?

Moira’s close friends are also looking for her. Among them are: the serious and said Piyush Mathur, his eight-month pregnant wife Misha, the poor little rich South Mumbai girl Avni, and her boyfriend Ashish. But none of them wants to go to the police yet. They fear to jump to a conclusion before examining all possibilities, especially because of an incident a year ago, when Moira had, in a similar manner, disappeared for two weeks following a nervous breakdown. They try looking for her themselves: tracing past conversations, talking to people she knew, looking through her things. What emerges during the course of their search are dark pasts and Moira’s difficult relationship with each of them. And it turns out that all of them wanted her gone and any one of them could have done it.

The novel has been written in alternate third person (current day events) and first person (Moira’s unravelling of her story). It is in the genre of books such as Gone Girl (by Gillian Flynn) and The Girl on the Train (by Paula Hawkins) with unreliable narratives and unexpected twists and turns. The book is very atmospheric and transports you to a different dark world. The characters are highly nuanced with interesting back stories and interpersonal dynamics. The book has an unputdownable quality about it and will make you think about the characters and their interactions long after you’re finished reading. You might have met people like that in your life, you might also have friends like them, and that’s what makes this novel so believable and scary as hell. What happened to Moira, can also happen to you!

Below is an extract from the book to give a flavour of the writing style and the dark undertones that dominate the narrative:

A strange thing happened when I was breaking up with Himanshu. When he was gone, really gone—not the sticky remains of breakup kind of gone when you still have hope­—I went into some sort of rebound almost immediately. It was short­—a few weeks at most—and it came with its consequences, but it did comfort my heart, which was haemorrhaging then.

My affair with Himanshu had been a bad decision to start with; I cringe now thinking about it. I was lonely and he was willing; I think it was more of the latter. Whatever the reason, it worked well to strip away my loneliness; the thrill of our clandestine affair a reason to wake up in the morning and do the mundane. When we were together, it was fun and exciting and I didn’t want to let go. I clung to him when we were together. I clung to him after we broke up.

Like algae. After it shows up. Hard to get rid of.

Our first client meeting together, that was the first time we felt something. This was a month after I’d joined Brevity. We wound up a very good meeting and were driving back. In the back of a hired cab, awkward, wondering what conversation to make. The driver fiddled with the channels on the cab’s radio, but it was broken. After a few tries when nothing good came on, Himanshu rummaged through his bag and handed him a CD. A second later Miles Davis came on, turning that stuffy, old car into something quite magnificent.

I smiled at Himanshu and he smiled back. Something passed between us then and I don’t know why—or perhaps I was only waiting for a sign from him—I stretched out and touched his hand. He did not draw away but looked straight at me—into my eyes. In the dark corner of the seat’s edge, he was like a phantom—his body, luminous in the traffic lights from outside, glowing against the dusty window. We stayed that way for half an hour, indifferent even to the driver who threw us curious glances from the rear-view mirror.

We stayed that way until he dropped me home.

I couldn’t wait to get to the office the next day.

The next time, we went to my place to spend the night.

The walls of my home were witness to those nights, nights I lived over and over again, nights I wished would never end.

But they ended. Like all things I yearned for, they ended too.

Slip. Slip a few more inches down the abyss.

Sometimes, after we’d made love, he would prop an elbow on the pillow, rest his head on a palm, and stare at me, puffing away on a cigarette. He’d stretch a finger to stroke my forehead, tracing a finger down my nose, my chin, resting at the nape of my neck. Move the fingers around and grasp it. Then, he’d pretend he was choking me. You’re mine, he’d say, I can do with you as I please. We’d smile at each other after our moment of intimacy. Our secret ritual. Then after he’d leave, I’d take a bath, scrubbing extra hard to remove his smell, which clung to my skin like stubborn prickles. I remembered that smell later, and the memory of his hands on me—sinewy fingers with stray clumps of hair at their centres.

His temper was not something to be trifled with, I knew.

The abyss crept up to me. Falling into it took less than a nudge.

Then one time, it went too far. When I fell down the abyss. Nothing to save me. Nothing to break my fall.

A fast and pacy read that will keep you guessing until the very last chapter. The ending, in particular, is sure to make your breath stop in your throat – so unexpected! Definitely one of the better thriller novels out there and totally worth adding to your bookshelves. You will not be forgetting about Dead to them in a hurry.