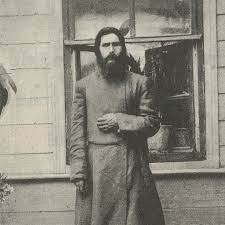 Grigory Yefimovich Rasputin, original name Grigory Yefimovich Novykh, (born 1872, Pokrovskoye, near Tyumen, Siberia, Russian Empire—died December 30, 1916, Petrograd [now St. Petersburg, Russia]). He was a siberian peasant and mystic whose ability to improve the condition of Aleksey Nikolayevich, the heir to the Russian throne, made him an instant favourite at the court of Emperor Nicholas II and Empress Alexandra.

Although he attended school, he remained illiterate, and his reputation for licentiousness earned him the surname Rasputin, Russian for “debauched one.” He evidently underwent a religious conversion at age 18, and eventually he went to the monastery at Verkhoture, where he was introduced to the Khlysty (Flagellants) sect. Rasputin perverted Khlysty beliefs into the doctrine that one was nearest God when feeling holy passionlessness and that the best way to reach such a state was through the sexual exhaustion that came after prolonged debauchery. Rasputin did not become a monk. He returned to Pokrovskoye, and at age 19 married Proskovya Fyodorovna Dubrovina, who later bore him four children. Marriage did not settle Rasputin. He left home and wandered to Mount Athos, Greece, and Jerusalem, living off the peasants’ donations and gaining a reputation as a starets (self-proclaimed holy man) with the ability to heal the sick and predict the future.

Rasputin’s wanderings took him to St. Petersburg (1903), where he was welcomed by Theophan, inspector of the religious Academy of St. Petersburg, and Hermogen, bishop of Saratov. The court circles of St. Petersburg at that time were entertaining themselves by delving into mysticism and the occult, so Rasputin—a filthy, unkempt wanderer with brilliant eyes and allegedly extraordinary healing talents—was warmly welcomed. In 1905 Rasputin was introduced to the royal family, and in 1908 he was summoned to the palace of Nicholas and Alexandra during one of their hemophiliac son’s bleeding episodes. Rasputin succeeded in easing the boy’s suffering (probably by his hypnotic powers) and, upon leaving the palace, cautioned the parents that the destiny of both the child and the dynasty were irrevocably linked to him, thereby setting in process a decade of his powerful influence on the imperial family and affairs of  the state.

In the presence of the royal family, Rasputin consistently maintained the posture of a humble and holy peasant. Outside court, however, he soon fell into his former licentious habits. Preaching that physical contact with his own person had a purifying and healing effect, he acquired mistresses and attempted to seduce many other women. When accounts of Rasputin’s conduct reached the ears of Nicholas, the tsar refused to believe that he was anything other than a holy man, and Rasputin’s accusers found themselves transferred to remote regions of the empire or entirely removed from their positions of influence.

By 1911 Rasputin’s behaviour had become a general scandal. The Prime Minister, P.A. Stolypin, sent the tsar a report on Rasputin’s misdeeds. As a result, the tsar expelled Rasputin, but Alexandra had him returned within a matter of months. Nicholas, anxious not to displease his wife or endanger his son, upon whom Rasputin had an obviously beneficial effect, chose to ignore further allegations of wrongdoing.

Rasputin reached the pinnacle of his power at the Russian court after 1915. During World War I, Nicholas II took personal command of his forces (September 1915) and went to the troops on the front, leaving Alexandra in charge of Russia’s internal affairs, while Rasputin served as her personal advisor. Rasputin’s influence ranged from the appointment of church officials to the selection of cabinet ministers (often incompetent opportunists), and he occasionally intervened in military matters to Russia’s detriment.

Though supporting no particular political group, Rasputin was a strong opponent of anyone opposing the autocracy or himself. Several attempts were made to take the life of Rasputin and save Russia from further calamity, but none were successful until 1916. Then a group of extreme conservatives, including Prince Feliks Yusupov (husband of the tsar’s niece), Vladimir Mitrofanovich Purishkevich (a member of the Duma), and Grand Duke Dmitry Pavlovich (the tsar’s cousin), formed a conspiracy to eliminate Rasputin and save the monarchy from further scandal.

Rasputin was murdered during the early morning on 30 December 1916, at the home of Felix Yusupov. He died of three gunshot wounds, one of which was a close-range shot to his forehead. Beyond this, little is certain about his death, and the circumstances of his death have been the subject of considerable speculation. According to historian Douglas Smith, "what really happened at the Yusupov home on 17 December will never be known." The story of Rasputin's death that Yusupov recounted in his memoirs, however, has become the most frequently told version of events.

Desperate to find a cure for their ailing son’s haemophilia, one night they called upon Rasputin. After his session with the young boy, the bleeding seemed to stop for some time. Some historians, such as Pierre Gilliard, have speculated that the bleeding likely stopped as a result of Rasputin’s insistence on disallowing the administration of aspirin (a known blood-thinning agent), and not any “mystical” powers he may have had. The Tsarina was amazed, and immediately enlisted the services of Rasputin as a close adviser.

Myth 2: He was a sexual deviant and the Queen’s lover

Tales of Rasputin’s sexual exploits began to spread early into his time with the royal court, as his eccentric behavior—like drinking heavily and visiting brothels—was seen to clash with his religious piety. According to some historians who believe Rasputin may have been a member of, or at least influenced by the Khlyst religious sect, such sinful behavior brought him closer to God. However, though he did frequently entertain in salons, there is no evidence to suggest Rasputin was a sex-crazed maniac who had a secret affair with Russia’s queen. Much like the rest of his life, his behavior in this realm has been exaggerated, and—following the February Revolution of 1917 - embellished by his enemies in attempts to propagandize his life.

Myth 3: He was Russia’s secret ruler

Because of his constant presence in the royal court, whispers grew that Rasputin was acting as a puppet master over the royal couple. Alexandra’s growing dependence on Rasputin and his apparent healing abilities with her haemophilic son only exacerbated these rumors. Occasionally, the monk did offer military advice as well as medical help, but his ideas never proved beneficial for the Russian army or Tsar Nicholas personally. In fact, after Tsar Nicholas took personal control over his armies on Aug. 23, 1915, under the advice of Rasputin and the Tsarina Alexandra, the Tsar became the target of blame for Russia’s battlefield defeats. Meanwhile, with the Tsar away fighting, a vacuum of leadership was filled by the Tsarina.

Here, the myth does approach the truth. Though the Tsarina was in charge, Rasputin did wield great power as her adviser. The mystic healer wasted no time in appointing his own church ministers and other public officials.

Myth 4: He was impossible to kill

Rasputin’s behavior and influence came to symbolize everything negative in Russian politics and society at the time. Even prior to his final assassination, other attempts on his life were made. In June of 1914, a beggar woman stabbed the monk in the stomach, claiming he was seducing the innocent. Rasputin made a full recovery, even though he had lost a lot of blood and was close to death after the incident.

Two years later, a group of nobles led by Felix Yusupov plotted to get rid of the holy man once and for all. On Dec. 30, 1916, Yusupov invited Rasputin to dine at his home. After a heavy meal, complete with wine and dessert, all supposedly heavily laced with poison, the men looked on, as surprisingly, Rasputin showed no symptoms that the poison was having an effect on him. The men proceeded to shoot Rasputin, who, according to legend still drew breath after a volley of bullets and only died after he was thrown into an ice-cold river to drown. However, while Rasputin’s death was in fact plotted by Yusupov and other nobles, autopsy reports show that no poison was found in Rasputin’s system and that he seems to have died from a single bullet to the head.

Myth 5: He rose from the dead

Much like the tale of his murder, the aftermath of Rasputin’s death has been mythologized over the years. According to legend, after Rasputin’s poisoned and shot body was thrown into the ice-cold river, he was fished out by a group of passers-by, who found that he was still alive when they dragged his body to the shore of the river. However, the truth is that after Rasputin’s already deceased corpse was thrown into the Malaya Nevka River, it took days for the police to find the body because the water had already frozen in the sub-zero Russian winter.

On March 15, 1917, Tsar Nicholas II abdicated the Russian throne as a result of the February Revolution. The following year, Bolsheviks eliminated the last vestiges of the Romanov dynasty. But myths about Rasputin endured - and, underneath those myths, there does reside some truth. Several historians have speculated that Rasputin’s influence did indeed play a role in the contempt for the royal household and everything it came to represent. The tale of Rasputin indeed shows that mythology can take a life of its own, and grow to become more important than the truth.

Rasputin’s miracles are till date a myth since there is no proof of them. The cause of his death is mysterious too as there are no proper records related to them. We can only speculate and create theories as to what actually happened. Maybe someday in the future we will find out what actually occurred and unravel the mysteries.