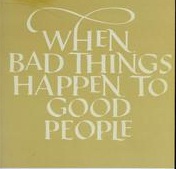 Just take an example of our earth. When it is dark in the eastern region, it is bright in the western part and vice versa. Can we say that the Sun is vanished there in regular intervals? No…… Because the Sun is still at its place. It is the earth while moving around its axis causes day and night. Similarly, we can not judge a person from a single instance.

Now coming to the topic, we will analyse, what happens when bad things happen to good people?

Take an example of a knife. A cook uses it for cutting vegetable into pieces. A student of Zoology uses it for de-section purpose. For a doctor it is a surgical instrument. Somebody can use it and keep it with him for self defense. But when it is used to kill others, obviously it is a bad thing. Here the knife is same. But, we human beings make good or bad by using in different ways for different purposes.

A person has to play different roles in society. At home he is a father, husband or a son. In outer world, he is a social person. At workplace he is an employee. He has to render several works at workplace. So, he has to give proper justice to his roles played at different places. He may be strict to his child for his career development. But, in other times he is a loving father to his child. At workplace, he is a disciplined employee. That does not mean that he is adamant of arrogant.

There are people who are very emotional, very touchy, very sensitive and very affectionate by heart. But, sometimes they are covered with a mask of graveness. We can not simply say that he is a heartless person. Because it is the circumstances which compels him or her to act so.

Just like the example of knife cited above, it is the surrounding, it is the attitude and it is the behaviour of others which controls the activities of a person. But, everyone should take care that nothing bad should be happened to a good people.

Our law says that let hundreds of criminals be freed, but one innocent should not be punished. But things happen otherwise. In our society the innocent suffers a lot. Take an example of a Government employee.

Somewhere I have read a satire that “My country is great, where ninety nine our of hundred are corrupt. There is no place for an honest person in a corrupted environment. He has to face many problems. He may suffer like anything. He may be transferred to a remote area, where there is no facility for education, health etc. Sometimes, the remote area is so polluted that it may not suit an outsider. He may fell ill. There may be no cooperation for him. Even he may not get cooperation from his family also. Sometimes it happens that he may get severe punishment for a small mistake. Web of conspiracies tied him like anything and he may not get a chance to overcome the troubles. It he raises his vice against corruption or takes any step to stop corruption, then his life will also be in risk sometimes. Sometimes, conspiracies made to delay his promotion, to hold up his monthly salary, to stop his annual increment etc. So, the ultimate thing will happen is that, he may get mad; he may commit suicide or will be bound to become corrupt. But, a few among them are there, who have the power to face the storm and have patience to get justice.

Sometimes, the same thing happens to a student, a competitor also. Last year, one student of Buxi Jagabandhu College of Bhubaneswar named Richa Mishra committed suicide due to this type of corruption. She was a good student. But, when she saw that students lower standard get better marks than her, she was disappointed. Out of depression she committed suicide, with a suicidal note against the lecturers responsible. After revaluation of hr paper, it is found that the new score is much more than the score given in her progress report. Action was taken against the culprits. But, did her parents get back their child? Did this punishment stop this type of corruption in future? What steps were taken to stop this type of humiliation in future?

From a survey, it is found that most the terrorists in the borders of our country are educated unemployed. They are compelled to become so for money. Can we say that all of them are bad by nature? No……. Some of them are revolutionaries. They are so tortured by the society and so fed up by the circumstances that they have no faith on law, order and justice. With the dream of getting more money and keeping their family away from poverty, they are purchased by the intruders and ultimately they become the enemy of our county.

Long years ago, the daughter of a political leader of Jammu and Kashmir(I could not recall his name) was kidnapped by the terrorists. Their demand was to release another terrorist who was in the police custody at that time. Our Government was compelled to free the terrorist to bring back the girl. I do not blame the Government for this act. Because, by this act, an innocent life was saved. But, I am sorry to say that some days after this incident, a school teacher was kidnapped, with the same condition and no steps like the former was taken by the Government and the teacher was slain. After this incident I had read somewhere in the newspaper, the version of his son that “My father was not the relative of a political leader, that is why no steps was taken for his rescue and he was killed.” And no wonder when we listen that his son has become a terrorist or rebellion later.

On the other side, it is the mentality of a person to utilize the situation in a bad way or drive it towards a good path. In these circumstances I would like to cite a story. There are two son of a person, who was a drunkard. Years after it is seen that one of them become a drunkard like his father and another become a respectable person of the society. Being asked both of them told that, it is because of their father, they become so. In other words both of them are influenced by their father.

But, the answer of another son was different. He politely told that from the very childhood when he saw his father being hated by the family members, by the society due to his bad nature, he decided that he will not be like his father and the ultimate result is that he is now among the respectable persons of the society.

So, why should not we be like the second son? There water in the ponds, in the ocean and also in the drains. But, the Sun is indifferent to all. It soaks water from everywhere. We should be like the son.

It is natural that in the present society, we have to struggle for getting justice. But, if we will keep our mind strong, we will get justice in someday or other. Yes, it is true that most of the good people are facing troubles. But that does not mean that they will be disappointed, disheartened. They have to struggle hard to prove their identity, to prove their innocence. And it is sure that someday or other things will be solved and they will be recongnised by the society. But for this we have to keep patience.