Are you chasing your goals or merely its means? 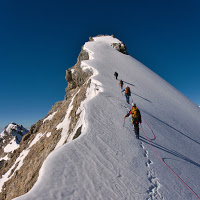 Have we got mixed up with our goals and the means to achieve those goals? Most of us have. Wake up before time runs out !...

Unhappy and frustrated with recent exam results at school, my elder one was desperately looking forward to something that could soothe her mind. It is not only about kids and exams, it could be you and your career, you and your business, your life, your relations, your passion. Whatever be it, in most cases we seemed to have mixed up with our life's goals and the means to achieve those goals. Don't believe me? Look out for yourself.

"Dad, now don’t tell me that results do not matter. I know that efforts are more important. But still I am not feeling good...", said a disappointed Arushi.

"Well, the fact is that results do matter. However, they are not in our control. Our efforts also matter. The beauty of focusing on the efforts is that efforts are always in our control. In any case, let me share with you a story of one of my friends in the United States - that should probably make you feel better..."

"William Richards was one of my colleagues when we were in the USA. We call him Bill. And you know people there - they are so fond of taking long breaks from the mundane job, and going on for adventures like biking, hiking, boating, flying, and what not."

"Ah! Those US days...", remarked Arushi with a glee in her eyes.

"Yeah...so, this guy – Bill, took a three-week vacation after we signed a new contract with the client. All of us had worked very hard for this, and we all deserved a break. Bill decided to walk up the mountains."

"Ok...Is it around the same time we went to Disney World?", inquired Arushi.

"Yes, exactly, we also took that 3-week break..OK, so when Bill was back after 3 weeks, he explained me about an incident that was strangely disturbing for him."

"Bill told me that during one of the days when he was climbing one of the toughest peaks. That day was particularly rough for him. He had been climbing since last 6 hours and it was late in the afternoon already. He was literally sweating in the snow, his legs were paining, his shoulders were aching...He was finding it really tough. But of course, he did not have a choice at that time. While all that was happening, he heard a noise of a helicopter quite close to him. When the sound of the whirling helicopter blades increased further, he just looked up and was amazed to see what he saw."

"It was one of his friends and his neighbor Ronnie on the helicopter...Ronnie was a rich man, also fond of mountains."

"They waived at each other, and then Ronnie shouted that he was going to the M4 peak...Bill said he was too..."

Ronnie then waived Bill to come over to the helicopter and he offered to throw the ladder down to pick him up. Bill was confused whether he should take this offer.

"C’mon Bill. We have the same goal. We can use his helicopter as a means to achieve this goal faster. What are you thinking? I started just 15 min back and we will be there at the M4 peak in next 5 minutes."

"Then, did Bill accept his friends offer?"

"No, Bill did not. And whether Bill accepted the offer or not is irrelevant. The strange part was this. At that moment, Bill said that he definitely felt very frustrated, sad and hopeless."

"That’s obvious Dad...Bill has been climbing for hours together and was in pain. His friend did all that in 15 minutes - just because his friend could afford to rent a helicopter."

"It is not obvious my child. It is the core issue.”

“Here is what the issue us. If Bill felt sad seeing his friend go past him and reach the peak in no time with least effort, then I am sorry to say that Bill has got completely messed up with his goals and the means to achieve the goal."

"OK. what do you think was Bill’s goal?"

"To reach the mountaintop."

"Again, we always get it wrong here. That is the issue. We get so messed up. Think again why did he take the vacation? At that point when Ronnie was waving at him, Bill thought that reaching the top is the goal and climbing are the means to achieve the goal, while actually, it is exactly the reverse. Think. The climb is the goal and the mountaintop is the means that help him achieve his goal. Did he not take a break to enjoy a few days 'climbing'? The objective was always to climb and enjoy the climb. Now, having said that, remember that the mountaintop is also important, but just as a means. If there was no top, then there would be no climb."

"If he was clear about the goal (climbing), would he be frustrated to see his friend reaching the top faster?"

"Definitely no. Who reaches the top faster and with how much effort - all this would cease to matter if the goal is to climb. It is just how we look at things. In fact, he should be satisfied that he is already achieving his goal of climbing - which cannot be accomplished in any way via a helicopter."

"And now tell me what is your goal when you study - to learn new things and acquire knowledge or to score marks?"

Arushi went in thinking mode. It is this self-introspection only that was going to set her perspective right. I let her take her time. After some time, I had to trigger it..

"So, let me make it absolutely clear to you. Marks are not the goal at all. Marks are just a means - that help you focus on your main goal - which is to acquire more knowledge, and become wiser. While striving to achieve more marks, your goal is to become knowledgeable and wise – and not the other way round. Let there be no doubt about this. Do not mess up your childhood days in this confusion. Do not do the same mistake that Bill did."

"Wow, this does give me a different perspective. But that is not how our teachers and classmates think. They look highly on us only when we get good marks."

"Yeah, that is how it is always going to stay - perhaps. They have messed up their lives, and we cannot go and correct everyone around us. It is not feasible. But my advise to you would be not to just follow the herd. The entire herd may be headed to hell."

“I get that Dad…I definitely feel better..”

Arushi got it. I got it a few years back. Some of you may get it with this post. Some will never get it. Doesn't matter. The end is the same for everyone. But hold....reaching the end of our life is not our goal. Reaching the end is just a means - a reminder - for us to improve, become better, possess more mental strength, exhibit more happiness, elevate someone's life - and these are our goals. Do not get messed up between the goal and the means.

On a vacation trip remember that the goal is not to reach the destination, but to enjoy the in-between moments - waiting at the airport, the cab ride with family, the meal at the hotel, the dance party, the scuba dive, the isolated hour at the beach. In a job or a business, the goal is not to reach the next level - but to impact as many people, experience awesome time and relations on the journey.

"You always had a goal of financial freedom....", remarked one of my readers.

"The goal was never to be financially free, Freedom is only a means to reach our goals - of doing what we love doing – writing, planting trees, spending time with children and spouse, taking care of parents, meeting friends - and having an enjoyable life.", I responded.