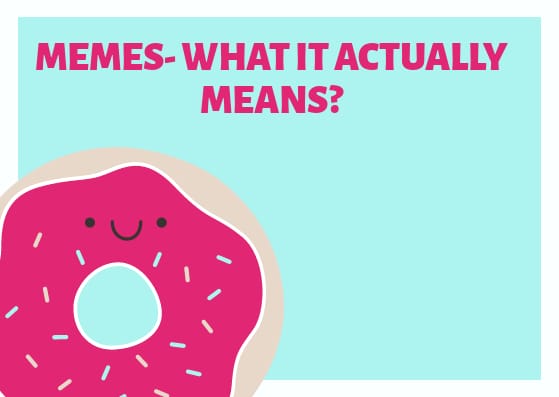 Meme- as the urban dictionary's definition states, it's not just a word. It's a lifestyle. In other words, it is defined as a cure for depression or a way of living life through technology.

Earlier, memes were the best sources of infotainment. A ten-page long article was summarized within 20 pictures. We got to know all the current affairs. They were nothing lesser than 'facts under fifteen seconds '.

As time progressed, memes became an ideal part of our daily life. A funny meme after a tiresome day at work, a serious social meme when we were running behind petty issues and memes supporting the growth of art took our social platform and networking to another level.

Few months after memes started going viral everywhere, there was a huge rise in the number of meme creators. The person who creates memes, shortly called MC's were considered as the modern era social workers(self-proclaimed, huh?). With the widespread reach of social media, meme creators started building their own brand. They say, "Too many cooks spoil the broth".

Gradually, there arose a situation where being a full-time meme creator gained more respect than all other working professionals. This massive outbreak, huge explosion of thoughts, if guided in a proper way could bring a positive change among many.

But are we really channeling it in a proper way? Every time, the theme of all those 'so called awareness memes' degrades or shames someone. Evolving deeply, the patriarchal mindset and someone's misleading thoughts become the root cause for these memes.

We are not letting anyone be comfortable with what they wear or what they do. For instance, if a girl wears make-up, a meme along with her picture is made with the caption stating, "Dare to post a picture of yours without makeup". If she posts a no- makeup picture, again she gets trolled saying, "Please wear make-up, we cannot see you like this".

Right from the way a girl dresses till the way she speaks to someone, everything is being made into a meme. The problem is, either they over glorify girls and compare them to goddesses or they treat them with very low standards. However, both extremes are dangerous.

And there is another special category of meme creators, who set different parameters for even being a human. They are the ones who 'strongly' believe that 'proper dressing could set things right'. This same kind of people also worries about a particular actress's age and why she isn't married yet, no matter how successful she is.

Half baked intellectuals and 'claimed-to -be-intelligent' MC's frequently post 'humorous' content that includes (funny?) topics like gay sex and lesbian sex. They even go to the extent of mocking transgender people. They can never understand that someone's basic right and feelings are not supposed to be  cheap concepts here.

Another group called 'let-me-teach-them-a good lesson' comes under an entirely different category. They share or post someone's video or photo because that was completely wrong according to their criteria and they are planning to teach them a good lesson(?). More the views and shares, greater the lesson taught!

Be it a guy or girl, if someone has talent and they channel it through the right use of social media to gain broader opportunities, they get trolled. Trolling a person's looks, appearance, sexual orientation is a criminal offence actually. 'Why promote yourself or your page by degrading someone? If trolling someone gives you happiness on a personal level, then it is high time to see a psychiatrist/psychologist.'

Recently, 'fixing crushes' with a single video has become very popular. You like the way someone dances/sings. Fine. Share it with proper permission with an appropriate caption.' How can you fix someone as your crush/girlfriend/wife/husband/boyfriend with a single video?'. And if their next video doesn't turn out as you 'expected' you begin to troll her/him. Why praise someone too much today and then troll them the next day? Seriously, are you mad?

Posting shitty content like, 'Buying gift for mom is best, buying gifts for girlfriend/wife is waste ', 'Dear girls, don't see me too much. I'm in love with my mom', 'Dad is my first boyfriend', 'Blood is parents' are completely changing the perspective of today's relationships. Why put down romantic/sexual relationship and glorify parental ones? Parental bonds are supposed to be cherished, nurtured and loved. Not romanticized/glorified.

Politicians, cricketers, actors, musers, working women, housewives....the list goes really long. And, mark my words, they don't spare anyone. This definitely does not pave the way for a healthy society.

There is a thick line between derogatory content and humorous content. Mixing up both would end up somewhere else. It's high time we take steps to stop this.

Mocking someone on any grounds is completely wrong. Everyone out there is struggling hard to prove themselves. If you can't encourage someone or hate their growth, just stay calm and mind your own business. Everyone is a human and the victims of such trolls can't take it for a long time.

Bringing a censor for memes is highly needed. And when such vulgar memes are reported on social media platforms, strong action must be taken. We need proper education on what is right and what is wrong.

Live and let live. Let them dress, behave, eat, live and love the way they want. Their life has nothing to do with yours. And you don't have any rights to degrade someone for the sake of likes and comments. You may be a very good meme creator and you may have gained a lot of followers. But that will never give you the right and freedom to bash someone. You don't have any rights to get into someone's personal space.

If you like a content, share it with proper permission. If not, just ignore it. No one is seeking your validation here and that is not someone's duty to satisfy your thoughts and get your approval.

Let's hope for a good change in this meme culture!