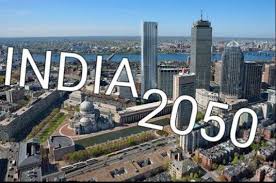 India would become a global superpower like America and China.Sky scraper buildings would be the norm and may be up to 60 floors.India may top the world economy as speculated could be 85-90  trillion dollars.There would be a free India minus any kind of caste system.India would become one of the most populous countries with 50% population living in urban areas instead of villages.There would be smart traffic management and efficient  transportation facility.Cars would have frictionless tyres and having binary power There would be less accidents as there would be a spurt in vehicle-to vehicle communication.If accidents occur  the nearest ambulance would be alerted and healthcare would be world class helping saving of lives.There would be fully connected intelligent homes with humanoid robots helping with household chores.Education would transform into connected classrooms and the need of visas would end.

There would be significant progress in the fields of machine learning,voice recognition and artificial intelligence which will lessen the digital divide between urban and rural populations.Technology would become simpler.Energy efficiencies will improve and the power condition would be better.There would be high speed data connections and we would have an easy access to it.Living standards would be higher and better ,which would lead to a decline in crime rates.

Unemployment would fall by 45.27% and rupee would attain supremacy.