Bacopa monierri or the Brahmi Booti 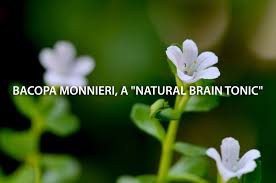 Native-to wetlands of South India and found all over the world.

The plant is called as' Brahmi' in Hindi  after Brahma the God of creation.In ancient times it was recognized as an important herb which had cognitive abilities.It is considered as a star of Ayurvedic medicine as It has been used to treat mind related health problems.It belongs to a class of herbs which improve memory and intelligence.In the present time it is considered as a 'Nootropic' which is a'smart drug' which enhances memory.

It is non aromatic,perennial,creeping herb

Flowers are small white and purplish in colour

During aging brain degradation occurs and brahmi is the best brain tonic.The bacosides help in the regeneration of brain cells.It has shown good results in treating Alzheimer's disease.

It is also good for liver health.It is a safe,natural detoxifier which removes toxins and promotes proper liver functioning

It is used to maintain normal blood pressure of the body

It rejuvenates the mind,enhances memory and improves concentration.It is useful in anxiety and ADH disorders

Brahmi oil and paste are applied on the skin to get a healthy skin and healing of body joints.

It is used to cure asthma

It is helpful in insomnia by reducing stress

It is a neurological  tonic and helps to cure epilepsy

It is good for voice hoarseness and backaches