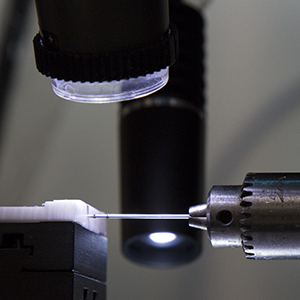 Due to its unique features, such as ultrashort pulse length and high peak power intensity, the picosecond pulsed laser generates distinct results from conventional lasers. This presents new opportunities for hard-to-machine materials like Tungsten Carbide, also known as WC. The most significant aspect of ultrashort laser pulses is their ability to obtain high peak power and quickly transmit energy to the substrate before thermal diffusion occurs.

As a result, certain problems may emerge during the laser machining of cemented WCs, such as increased HAZ, rough surface finish, and debris repositioning. Such problems can be eliminated by using an ultrashort picosecond laser micromachining with optimal laser processing parameters. For example, when the WC substrate is 0.2 mm thick, it is apparent that the picosecond laser-drilled hole has better quality than the nanosecond laser-drilled hole.

The whole layer is very clean, with almost no HAZ and no debris repositioning, whereas a HAZ of around 20 μm is produced of a hole drilled with a nanosecond laser. From an energy-dispersive x-ray (EDX) study, it can be seen that the cobalt binder in the HAZ has been evaporated relative to the initial surface.

The effect of pulse duration on drilling efficiency can be described in terms of the thermal diffusion rate, which is an essential parameter in explaining the laser-induced thermal phenomenon. This depends on the laser pulse duration, the material's thermal conductivity, the mass density of the material under investigation, and the heat capacity.

The results of numerous laser parameters, such as focus location, repeat rate, hatching pattern, and scanning speed, on machining efficiency in terms of HAZ, debris repositioning, hole circularity, hole taper, surface finishing, and cleanness were examined. In terms of hole taper, edge, and area cleanness, the optimal target area was found to be 0.1 mm below the sample. It was also observed that a lower repeat rate helped to eliminate HAZ and debris and to create a circular hole exit.

Laserod Technologies is one of the industry’s commanding experts in laser micromachining of polymers and other substrates for microscale applications. Our high pulse femtosecond and picosecond laser micromachining are uniquely suited for microscale-polymer machining for many applications. For all kinds of grooving, slotting, or scribing thin materials, metals and polymers, contact Laserod today at 1-888-991-9916 / 1-310-340-1343 for projects and inquiries!