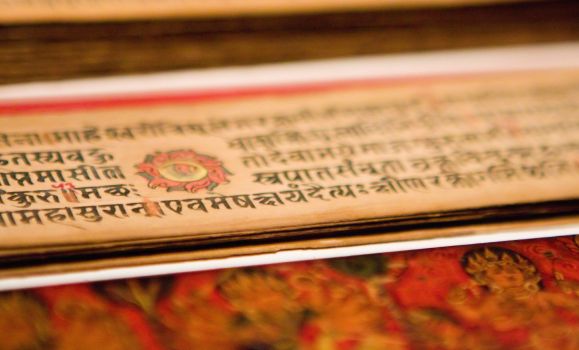 Literature in Sanskrit, India's oldest language, and the mother language of several modern languages in India. Given its extensive use in religious literature, primarily of Hinduism, and the fact that most modern Indian languages have been directly derived from or strongly influenced by Sanskrit, it is not surprising that the position of Sanskrit in Indian culture is not unlike that of Latin in European culture. Sanskrit has a long tradition of literature. Chronologically, Sanskrit literature has these identifiable phases :

Composed between approximately 2000 BC and 500 BC, Vedic literature forms the basis for the further development of Hinduism. There are fours books of Vedas - Rig Vega, Yajus, Sāma and Atharva. Some people consider the first three as the more important ones. Each Veda contains four parts - hymns, rituals, meditation and mystical philosophy. The Vedas were not written at any single time, and have been compiled over several centuries by thousands of people. As a result, the Vedas provide an insight into the historical and cultural development of India during this period. In terms of their content, the Vedas are extremely diverse, encompassing extremely different lines of thought and religious beliefs. The Upanishads form a part of the Vedas, and are strongly philosophical in content.

The Sanskrit used in the Vedic period is highly archaic and pithy, and is called "Vedic Sanskrit"; it is almost impossible to understand some sections without the aid of commentaries.

The period between approximately the 12th and the 2nd centuries BC saw the composition of the two great Hindu epics, the Mahabharata and the Ramayana. They are known to Hindus as itihaas, or "that which occurred" and are both collective works, having evolved through the centuries before finally being put into writing sometime in the 2nd century AD.

Arguably, no grammarian has had as much influence over the grammar of any language as much as Panini has had over Sanskrit grammar and phonetics. Panini was a Vaishnav grammarian from approximately the 5th cent BC. The Ashtadhyayi was his magnum-opus. The book completely standardized Sanskrit grammar and phonetics. Panini's grammar became widely accepted and is still the standard (a common way to classify ancient Sanskrit books is to classify them as Pre-Panini or Post-Panini).

However, Panini's stroke of brilliance lies in the fact that the grammar he wrote, in addition to being a descriptive grammar, is also a generative grammar. Panini used metarules, transformations, and recursion in such sophistication that his grammar has the computing power equivalent to a Turing machine. The Backus-Naur Form or BNF grammars used to describe modern programming languages have significant similarities with Panini's grammar rules. In applying his rules to Sanskrit verse he used such texts as the Hindu Shiva Sutras, thereby establishing principles of harmony and linguistic wholeness.

This refers to the poetry produced from the 3rd to approximately the 7th centuries. Kalidasa is the foremost example of a classical poet. While Kalidasa's Sanskrit usage is simple but beautiful, later Sanskrit poetry shifted towards highly stylized literary accents: stanzas that read the same backwards and forwards, words that can be split in different ways to produce different meanings, sophisticated metaphors, and so on. A classic example is the poet Bharavi and his magnum opus, the Kiratarjuniya (6th-7th century).
The greatest works of poetry in this period are the five Mahakavyas, or great epics:
* Kumarasambhavam by Kalidasa