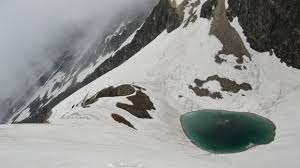 A small lake known as Roopkund Lake sits high in the Indian Himalayas, more than 16,000 feet (4,900 meters) above sea level. Covered in ice and surrounded by rocky glaciers, the lake appears to be a typical, albeit beautiful, natural wonder. However, during one month of the year, when the ice melts away and the bottom of the shallow lake becomes visible, the true nature of the lake reveals itself. At the bottom of the lake are hundreds of mysterious human skeletons. There have been efforts to determine who these people were, where they were from, and how they died, buy many questions still remain unanswered about the skeletons at Roopkund – now referred to as Skeleton Lake.

Roopkund Lake is located at the bottom of a small valley in the Himalayas, in Chamoli district, Uttaranchal, in India. The lake is very shallow, with its greatest depth at approximately 2 meters. The area is a popular destination for adventurous tourists, due to the spectacular trek to get there. There are several trekking routes on the way to Roopkund, which many take advantage of, both for the picturesque view, and to satisfy the curiosity and intrigue surrounding the skeletal remains.

Trekkers making their way to Roopkund in the Himalayas

The first reports regarding the skeletal remains date to the 19th century, but the remains were re-discovered by Nanda Devi game reserve ranger H K Madhwal in 1942. He discovered a few of the skeletons at the bottom of the lake while it was frozen. As summer came, and the frozen lake melted, more skeletons were revealed in the lake, and around the lake’s edges. It is believed that the skeletons number around 300.

When the discovery was made, there was no information available about the remains. No one knew who the remains belonged to, how long they had been there, or what had happened to them. Since the skeletons had been rediscovered during World War II, the first assumption was that these were the skeletons of soldiers, perhaps Japanese soldiers who had died from exposure to the elements while traveling through India. Because of this possibility, determining the source of the remains became a priority. A team of investigators was sent to Roopkund, where they quickly determined that the remains were too old to be from the ongoing war. With the immediate concerns of war being eased, the urgency of identifying the remains became less of a priority and efforts to further analyse the remains were side-lined.

With later investigation, it became apparent that the remains consisted of more than just bones. The frigid temperatures, and dry, cold air allowed bits of flesh, nails, and hair to be preserved as well.  In addition, pieces such as wooden artefacts, iron spearheads, leather slippers, and jewellery were discovered.

Oxford University's Radiocarbon Accelerator Unit conducted radiocarbon dating on the remains and concluded that they date back to around 850 AD. Without any evidence of a nearby settlement, it is believed that the individuals were traveling when they died. But what caused their death? Was there a massive landslide? Did some disease strike suddenly? Were the individuals conducting a ritualistic suicide? Did they die of starvation? Were they killed in an enemy attack? One theory even suggests that the individuals did not die at the scene of the lake, but their bodies were deposited there as a result of glacial movement.

There is one local legend that may shed some light on the identity of the remains. According to legend, Raja Jasdhaval, the king of Kanauj, was traveling with his pregnant wife, Rani Balampa. They were accompanied by servants, a dance troupe, and others as they traveled on a pilgrimage to Nanda Devi shrine, for the Nanda Devi Raj Jat, which takes place every twelve years. As they traveled, they were overcome by a sudden, severe hailstorm with extremely large hail stones. The storm was too strong, and with nowhere to take shelter, the entire group perished near Roopkund. For a long time this story appeared to be a legend, with no evidence to substantiate it. However, recent finds may lend some support to the legend.

In 2013, researchers concluded that it likely that the individuals had been killed in a hail storm. The injuries on the remains indicate that each person was killed by one or more blows to the head, neck, and shoulders. There do not appear to be injuries on any other parts of their bodies, which rules out death by landslide, avalanche, or weapons. As of today, the conclusion that this group of people died due to a severe hail storm remains the most plausible explanation as to what happened to them on their ill-fated journey. However, there has been no verification as to whether this was a group traveling with the king of Kanauj, as legend states.

There is nothing we know for sure and it may take quite some time till we get to the bottom of this mystery.