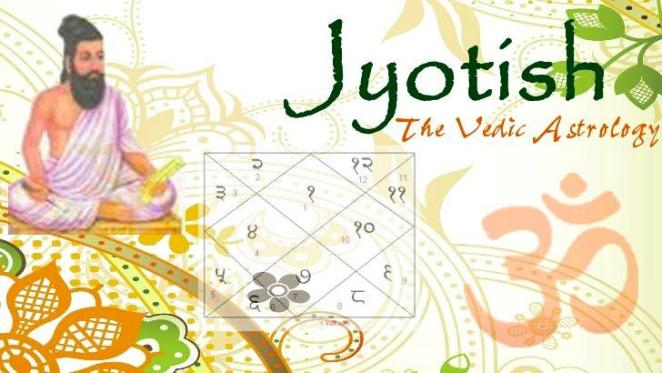 Astrology is a branch of science which cannot be described in a page or  a book. It is a topic of million years to study and a subject to discover human mentality about the movement of the, moon, the sun and the navgrahas.The astrological topics are as ancient as the Vedas. In ancient times, the study of constellations and other celestial bodies was called astrology. It can be said very clearly about its mathematical part that there are clear calculations in the Vedas about it. Very detailed imformation about the results was found later.

The number of manuscripts of astrology written by Indian teachers is more than one lakh. [1]

The following are the branches of astrology:

The first step of the study of astrology is understanding the Panchang, the authorized book of astrology lovers. The name "Panchang" because  the book covers five topics, namely,

Every Lunar month consists of two Paksh and thirty Tithis.Two Paksh are Krishna and Shukla Paksh. Each Paksh has 15 Tithis.According to the Hindu calendar, 30 days of the month are divided into two sides of 15-15 days on the basis of Chandra Art - Shukla Paksha and Krishna Paksha.The last day of the Shukla Paksha is called Purnima(full moon) and the last day of  the Krishna Paksha is called the Amavasya (new moon).According to the Panchang ,Amawasya is the last date for the 30th and the Krishna Paksha of the month is the day on which the moon is not visible in the sky.There are 2 ions based on the Sun in 1 year - the first Uttarayan and the second Dakshinayan. Similarly, based on the Moon, there are 2 sides for 1 month - Shukla Paksha and Krishna Paksha.

From these, in the month of Uttarayan and in the month of the Dakshinayan, the Gods spirits are active in the Shukla paksh, whereas monsters and paternal souls are active in Dakshina and Krishna Paksha. Wise people do not do any kind of religious and demanding work at night while others do all the worldly activities including their religious and demanding work at night.

Nakshatras:-Indian Vedic astrology is basically constellation based. Therefore, when a child is born, the predictions for his good and bad are made according to the Nakshatras. Firstly, when the knowledge of the auspicious omission is made on the basis of the constellation, then it is said that the Muhurta is seen only on the basis of the constellation for the determination of its other forces. There is a big constellation from the planet and the stage of the big nakshatra when it comes to the nakshatra, the bridegroom of Vaara Buddhu is also done on the basis of the constellation Land Whenever determining moment for any auspicious work still has to be based on the most used to determine the stars of Vinshottri case for predictions of future coil is provided prioritize stars.We have seen that the twelve ratios divide 360degrees into the equator in equal parts. In this way we made twelve equal pieces of the sky. A group of stars together constitute the constellation. Such twenty seven constellations have been identified. From this, the sky is divided into equal parts. In the portion of every constellation, the sky comes to 13 degrees 20 minutes. When we talk about the daily movement of the Moon, there are special constellations of stars in this. If the amount is the same and the nakshatra changes, then the nature of the moon also changes. There are 27 Nakshatras in Indian Astrology.1.Ashwini 2.Bharni 3.Krutika 4.Rohini 5.Mrugshira 6.Aadra 7.Punarvasu 8.Pushya 9.Achlesha 10.Magha 11.Purwafalguni 12.Uttarafalguni 13.Hast 14.Chitra 15.Swati 16.Vishakha 17.Anuradha 18.Jyeshtha 19.Mool 20.Purwashadha 21.Uttarashadha 22.Shrawan 23.Dhanishtha 24.Shatbhisha 25.Purwabhadrapad 26.Uttarabhadrapad 27.Rewti

Friends, Bhashacharya ji has considered the eight types of planets in motion, which have been explored in Chapter II of the Surya Siddha *.

Of these, 1 curve, 2 followed by 3 devious, these three motions are curved.

In Sanskrit, curvari means opposite, inverted or backward. When a planet overtakes another planet due to its fast speed, then it is called Overcrowding.

The total number of percentages that the planet has in total speed, is low.

It is the percentage of the total planetary pathway that the time of such percentage of time is evolving. * SpeedForce Sensation * By Maharishi Parashar ji, the planets have given the following strength.

1: -When a planet is curved in the same amount, then the planet of curve is called as it is called 60 VISVA strength.

3: - If the speed becomes zero (a stable planet), then the planets of the motion of motion will be 15 Vishwaas, the speed of moderate speed, then the Modanda medium speed planet will have 30 VISA force, if it is moderate to moderate, It is 7: 30 VISAVA force, in the variable speed forward from the middle speed, then 45 VISA force, 30% of the superfluous power happens. While keeping the destiny of any planet, Bhukti, should keep in mind that the planets, ascending, descending, curve, And there is no follow up Yes If the planet is curvature, it will give the result of the higher planet and in its condition the person will get wealth, achievement, honor, respect and prestige. The auspicious planet becomes stronger and stronger, and when the sinful planet becomes curved, it makes the person sad.

Why We Celebrate Chaitra Shukla Pratipada as Indian New Year?

1. Brahma had created the universe today itself.

2. Astrology means-light. The very first day light in the universe was born with the first sunrise.

3. From today's day the calculation began.

5. Satya Yuga was started on this day.

Thus, Day of Chaitra Shukla Pratipada is special for all human beings.

The astrological point of view for us here is that from today onwards the sunrise for the first time on today, "Today, one billion, seven and a half million, twenty nine thousand one hundred and nineteenth solar year", and sunrise, in the light of sun, all the planets of the universe- The constellation began to shine, i.e. with the sunrise, the Navagrahas, twenty-seven constellations and twelve zodiacs also emerged.

The beginning of the calculation began today from the day.

Astrology is a lifeline of Indian Traditional Hindus and this subject is useful for study of great astrologist of india.With the Progress of the world,the love of the people will increase on this subject and in the coming days,astrology will show a new way to human society.

“With Blessings For World”