A DAY IN THE LIFE OF A SOLDIER 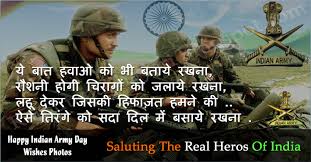 This is why a soldier is called a 'Braveheart'.People associate a soldier in the Indian army with perks and partying but this is a facade.They are devoid of sleep and leave.The army is deployed along the Himalayan borders,J&K and theLoC and these borders are hostile,lack normal facilities and there is presence of inclement weather throughout.Mostly soldiers stay here but during peace time they live in cantonments which is for a short period.

The military station is called the cantonment,where a number of units are billeted.The cantonment is a separate township under the cantonment board with strict rules and regulations.They emphasize on good roads and cleanliness.The units are a battallion or regiment staying together in the unit lines.These consist of barracks for living for the troops,playground,armoury for weapons and office buildings.There are J.C.O and N.C.O clubs,langars,unit canteen,recreation room,unit clothing stores and light vehicle repair sections are found in this unit.Barbers,carpenters etc  stay close by.Married officers live in small bungalows in the cantonment,while bachelors live in single rooms near the messes.

During peacetime  a normal day of a soldier starts before sunrise.Once the Reveille bugle is sounded the soldiers assemble in rank and file(fall in) in a sports kit.They have to be shaved and washed as now they have to be ready for physical training(P.T).The platoon commander a J.C.O inspects them to find out whether the soldiers have shaved and bathed.Their dress is also inspected to see cleanliness and neatness.Then the soldier is marched to the P.T ground( on the double running).In this assembly at the P.T ground all J.C.Os and officers join the parade.P.T involves vigorous exercise and running.After P.T the soldier disperses for breakfast and then assembles again after an hour's break for various training and parade.There is weapon training,firing,driving training and education classes till 12 o'clock.After this the soldier marches off to clean his weapons and return his weapons and equipment.Then goes to the langar for lunch.The J.C.Os and officers now go and attend the office.Everyone rests till the afternoon games,then again the soldier reaches the sports ground as he is supposed to play some game.Before sunset the Retreat  bugle is sounded,the flag in the unit's  quarter guard is lowered in presence of a duty officer.Night guards fall in front of the quarter guard and they are inspected.

By sunset the soldier is free and can wear the Mufti-a specified pattern of civil clothes.Then they have to go in for the'roll call'.Here in this parade they are given different orders and briefed for the next day.A physical count of all individuals takes place here ,then he is allowed to go to the recreational room to watch T.V or read the news.Dinner is early so he can get full rest.After dinner a bugle is sounded  ordering lighting out(go to bed) by 10 p.m.Everyone sleeps except the night guards.The soldier's life is a regulated life and the bugle calls summon the soldier for various activities.The bugle is an effective way of communication to commence or terminate activities in the unit line.