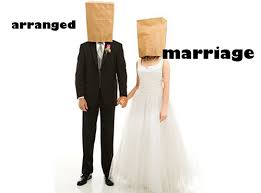 In India, you are not just an individual with personal goals and desires but also members of families and extended blood ties network. The basic setup you will observe as you read will be discussing the cultural practices (rambling basically) and speak to the much-debated topic 'modernity' (not westernization!) and the mockery of disparity and class hierarchies. The millennials are swinging hard to strike the right balance between their Indian thoughts and not-so-Indian-thoughts.(Why so Indian? Why so Western?) As, the prevalent consumerist culture in urban India is playing a key role in influencing the young generation's ideas about marriage, family, and person-hood and give them a new dimension to be vocal about their dreams and desires. We can easily observe and assess their struggle by just looking into their complicated marriage logic(OOPS! Should have used some 'sacred' term?).

Arrange marriage is usually seen as the patriarchal mechanism and is largely perceived as traditional and conservative while women via love marriage as modern, progressive, and independent. The media and everybody is in constant rife with debates on the love vs. arrange marriage systems.

The previous notion of arranged marriage in some cases invariably evoke tales of humiliation and division, social shaming, publicly chastised or taunted for dowry. The self-rights awareness gradually improved and is shaping the society. The Indian way of doing things, the Indian way of life.(No criticism for that) Though the Indian ways of living and values are of high value, even proved scientifically. What is targeted here is the orthodox practices and boundations in the name of tradition and culture which are quite bizarre and sometimes traumatic for a person. Despite all this, the oldies mentioned it as not-so-pleasant yet an inevitable rite of passage.

There are several layers to it as well. You never know the hidden agendas. And behind all those perfect lives, lies their not-so-perfect secrets! Meaning, some cover it up to hide and get over the 'homosexuality' as it is still understood as a 'disease' by the very intellectual dharma-teaching people. They act as messengers of God giving marriage as the cure to homosexuality. How difficult is it to accept that people are different? Why does the happiness of someone 'else' matters this...this...this...much? Don't they have their own life and goals?

The so-called advance families are sometimes no less, after all, the race comes first and it has to be pure! (Right?) Yes, the infamous NRIs.

Marriage seems to be a solution?

To this clash of worlds? Is it a means to recover some control and a way to survive this storm of change? Or, has it become a way to maintain their social position through their investment in education as well as a cultural practice? Despite investing in their daughters' education, marriage is seen as an inevitable and primary concern of parents but under society's pressure (which is quite underrated nowadays, as we blame the 'modernity' factor) The society's norms of being a 'good parent' and a 'good daughter/son' comes in the way.

The modern discourse of tradition:

If we try to understand the appeal of arranged marriages among the urban modern. We can easily say, the notion of a collision but actually these two poles apart-notions seems to match and meet. The traditional formula of family making and the modern desires of individual growth in case of our country has surprisingly turned the tables in its favor and is working successfully.

The goodie talks about equal citizenship, the stereotypical ideological pressures and the real-life public dangers makes them oscillate between their expectations, that of their parents, traditions, and modernity. All this reaches one conclusion and that is, 'sufficient modernity'. Afterall, we live in a 'sexually ordered' world. Right?

Vintage seems to never go out of the trend!

Most of the times, the behavior of the female member of the family and the earning of the male member are the parameters or say the survival kit of any Indian family. These two factors determine the social standing, unity, and harmony in the family. They are very well exploited and used for the marriage alliances.

Caste still plays an important role until it favors socio-economic likeness. It often moves along with the class, it gives you an insight into a family's lifestyle, speaking of attitudes, value systems, and daily living habits. (And, we want our country to be a better place where everybody is equal!)

You marry the family, not just the boy.(Oh! Please, isn't it, what women are made for? How could I dare open my mouth on this?) In the process of matchmaking, your families ought to be compatible.

Make excuses for your absence from work as repeated family meetings include rehearsals and styling sessions (Of course! She has got an Agni-pariksha to ace!)

Portray yourself as a perfect example of traditional and modern. (After all, you wear clothes to express yourself in some way or the other! And, who cares if you are not perfect. Right?)

The Indian virtue of modesty, tradition, and duty while pursuing modern values of education and career.(Perfect goals! Isn't It?)

The training sessions to talk and reply in the 'wifey' language as a reminder that for them, family comes first. They are discouraged from appearing too 'career-oriented' during negotiations, voicing this can mark that they are too interested in furthering their own lives and thus not eligible for being a good wife.(Buck up for the many more interview rounds to come!)

Filled with inequalities, marriage implies a huge cost to women. Most women invest far more in their conjugal lives than in their professional endeavors.(No problem with that only if it is her choice and not made to choose!)

Urban middle-class families are only just becoming accustomed to the idea of women in professional jobs. Gender roles, distribution of labor and equality in the decision were different in their household. These young women were confronted with the question of how to resolve the home-work balance. The exciting work opportunities challenged the restrictive social morals for girls and young women, resulting in increased domestic conflict. These obligatory responsibilities and social expectations and changes in the public world that are rapidly modernizing around them results in disorder and turmoil in the private world.

But......Now many women take it as an empowering and emancipatory move.

The empowerment is carefully weighed in against women's traditionally recognized role without jeopardizing the 'status' quotient. The idea of personal happiness overpowers and yet, grows along with the social concept of marriage.

Has the social choice been given a modification of a personal choice, to say the least? Have we started viewing this space not as one of humiliation and rejection but of choice and possibilities? Not from the vantage point of objects, but rather as consumer themselves, as people who had the freedom to select and acquire something they desired?Can it be viewed as a more strategic development and modernity to imagine a new future for itself? Afterall, everything comes with its pros and cons. As the new window opens up, millennials are smart enough to mould everything in a convenient way.

In such marriages, the whole family is working to make it successful and the maintenance of authenticity is never compromised especially, in the times when people are easily drifting towards the adaptation of all cultures but certainly, not of theirs. Everyone is upfront and if the orthodox systems are not followed and ignored, arrange marriages are potential fair transactions. Only if, the stereotypes, dowry, caste, class, religion and other weird stuff are ignored! Only if!

Earlier marriage was a means to an end but now it is not simply an end in itself.

That's the only difference we have started to realize and reciprocate.(Have we?)

Afterall, marriage comes with its own privileges too!