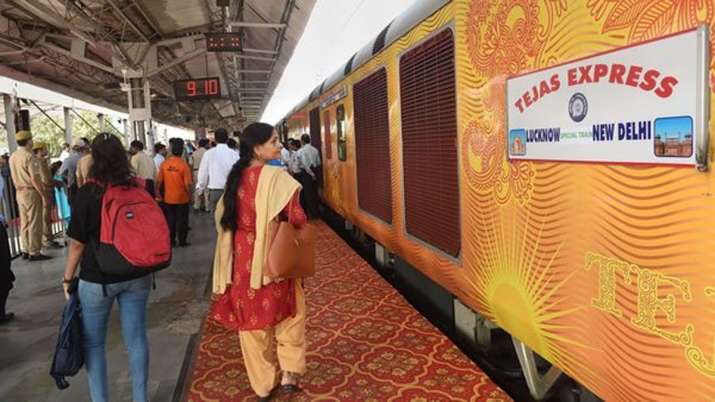 The Indian Railways has been running its trains over a massive network, spanning the length and width of our country and successfully helping passengers travel while also ensuring the constant supply of essentials in each corner of the country. The latter has come to fore in no small extent amid the COVID-19 outbreak.

Despite operating round the clock, and covering such a large area, the national transporter still faces several challenges. Passengers continue to demand more trains, and a better, and more advanced infrastructure.

With the beginning of the private trains project, the Indian Railways is on its way to becoming a more modern entity and will be providing its passengers with world-class facilities. The travel experience will soon be transformed with extraordinary transit facilities, superior railway stations and much more.

Read below to know more about the details of the upcoming private trains project.

Piyush Goyal led Indian Railways is gearing up to bring private trains into the country which will enhance the public transport infrastructure even further. In the last few years, we have seen metros, new kinds of trains including the Vande Bharat trains and the Kashi Mahakal train. Thus, the private trains project is a step in the right direction.

This mega train project will cost approximately Rs.30,000 crore, and the national transporter will be working in partnership with private companies on this project. For the running of passenger train services on the wide railways' network by the private operators, work has already begun under the Public-Private Partnership (PPP) model. Interestingly, the Indian Railways has started inviting requests for the same. The idea of involving private partners is to provide passengers with superior train services without the Indian Railways having to spend much money on it.

The government will run nearly 151 trains (5% of the total trains that run across the country) for which 109 routes have been identified. These routes will be divided into 12 clusters focusing on all the major city centres such as Jaipur, Howrah, Chandigarh, Bengaluru, Patna, Secunderabad, Prayagraj, Chennai, and two each for Mumbai and Delhi.

Several reports state that each of these 12 clusters will be independent business projects and will be managed by a private entity. Two clusters each for Delhi will cost around Rs 2,329 crore. The government has got a good response from private entities in its pre-bidding stage, and they aim to wrap up the same by the end of this ongoing financial year. The aim is to roll out the first set of 12 trains by 2022-23, followed by 45 trains in 2023-2024, 50 trains in 2025-26, and the remaining 44 trains in 2026-27.

With this mega new move, Indian Railways passengers can expect faster, comfortable and world-class travel in the coming years. Not only that, but the railways' private trains project is also an excellent opportunity for the government to turn the national transporter into a more significant money-making enterprise.

Indian Railways Private Trains project will give private companies the freedom to choose the halt stations. However, the list of these intermediate railway stations as proposed by the private operators will have to be submitted to the Indian Railways in advance. The Indian Railways further stated that the stops of these private trains would be around the same or less than the number of existing halts of the fastest Indian Railways train running on that route.

Indian Railways private trains project is a first of its kind where the national transporter and private companies will be working together. As a part of the train operation plans, private operators will have to work on finding the appropriate stations where the water tanks in the trains can be filled. They will have to include the stations with washing or stabling lines where the toilets can be evacuated. Additionally, after understanding the market conditions, the private companies will decide the fares of these trains.

Additionally, the redevelopment projects of stations will also be undertaken under the PPP model. A total of 50 railway stations have been planned under this route bringing in investments between 50,000-60,000 crores. Moreover, the development at Gandhinagar and Habibganj railway stations is already at an advanced level and expected to be completed soon. The other stations in the list are Anand Vihar, Gomtinagar, Bijwasan, and Chandigarh where work has already begun.

These new and modern trains will be manufactured under the Make In India initiative. By encouraging domestic manufacturing, this mega project will also help in creating direct and indirect employment. The Ministry of Railways said, 'The objective of this initiative is to introduce modern technology rolling stock with reduced maintenance, reduced transit time, boost job creation, provide enhanced safety, provide world-class travel experience to passengers, and also reduce the demand-supply deficit in the passenger transportation sector.'