Book Review: SOLITUDE and other OBSESSIONS 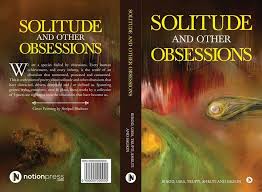 SOLITUDE and other OBSESSIONS is a thoughts and imagination treasury of Uma, Binod, Trupti, Shruti and Saurin. All the five poets have done an amazing work, they have compiled 73 poems in totals that reflect the emotions and feelings.

A human mind is always preoccupied with various and numerous thoughts. From man to woman, boy to girl, minor to stripling every humankind is indulged with obsession, some people refrain but some they cant and become obsessed.

Poems in the garner have a high and rich vocabulary, themes of the poem are multifarious. Poetry is something that has a power to control the mind, I was enjoying reading these poems on various topics, the book is full of awestruck and awesome pieces of poems of poets. Some of my personal favorite from this pile is Binod Panda's collection every poem has a story behind even years are mentioned, Life: With A smile amazing, Two to Tango, Who Am I, Send Me, Flute, The Light Princess, and In A Lap Of Death are few titles touched my soul.

Title and cover both didn't make a place in my heart, but yes poems have left the print in my heart!

Highly recommended to all the poetry lovers.

We are a species fueled by obsessions. Every human achievement, and every infamy, is the result of an obsession that tormented, possessed and consumed. This is a selection of poetry about solitude and other obsessions that have distracted, driven, destroyed and / or defined us. Spanning genres, styles, emotions, time & place, these works by a collective of 5 poets are a glimpse into the obsessions that have become us.

All about the five Authors

"Uma Sudhindra grew up in an army environment. After a decade-and-half of corporate life, she became an entrepreneur and has remained one. She loves books, music, travel & the Armed Forces. Her entrepreneurial venture Go Magic Trails reflects her passion for travel and experiencing the new & unique.

Binod Kumar Panda is the classic mix of left-brain, right-brain. Gregarious and charming, he's an engineer and MBA with a hugely successful corporate, entrepreneurial and consulting career.

His school and college years though were spent in the company of solitude and like-minded friends that resulted in thought provoking poetry.

Trupti Kalamdani is a mechanical engineer by profession who investigates stresses developed on an aircraft body at work; while at home, releases her stress by penning down a few lines.

Her tryst with poetry started during her school days, when she expressed her undying love for cricket in the form of a poem. Over the years, her limericks have grown into full bodied verses. A closet poet for years, she is finally out and exploring different platforms to share her work.

Her poems have been published in literary journals like efiction India, Taj Mahal Review and Coffee Shop Poems. She is also a regular performer at ""Let Poetry Be"" events at Atta Galatta.

Dr. Shruti Arabatti comes with a mature head over drooping arms and a mind ticking faster than an exploding bomb. Like her namesake, she is an orchestrated person living in a discordant cadence. She manages to hit all the right notes amidst all the gobbledygook yelping by her adorable preschooler.

Saurin Desai's first love led to a roaring affair that's ongoing now since nearly 30 years. At the innocent age of 8 he met a comic book that whacked him on the head (pun intended) and he fell heels-over-head, literally (pun not intended).

But being commitment-phobic, he had a couple of dalliances: with engineering, jobs & businesses, before succumbing to the seduction of the writer's life and giving up everything to become lazier than he ever was.