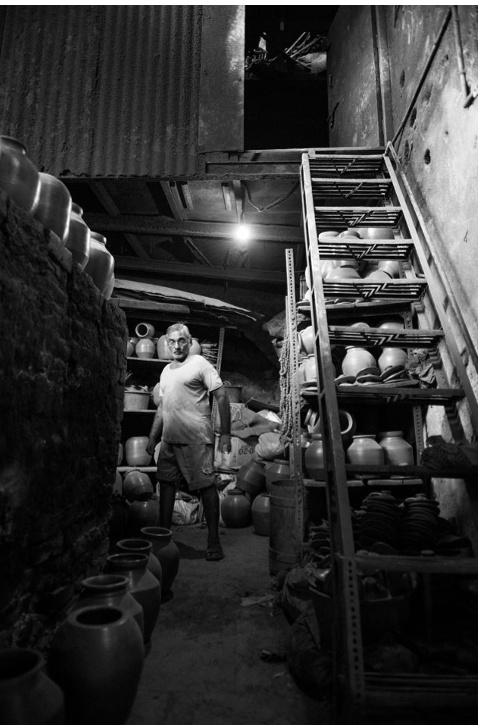 The pots, not the man, caught my eye. (Jokes about pot come to mind, but perhaps later.) After viewing this poignant image, the first question that popped into my mind was regarding the pots, not the man. It was implied that the man was a potter, photographed amidst his wares, but the question that I wanted answered was regarding what was inside the pots. Were they empty? Or were they filled with something? Local made wine, perhaps? Or pickles? Or maybe those exotic saris that are put in mud during a full moon? Funnily enough, the contents of the pot would determine the profession of the man, who wasn’t the most interesting thing in the picture, at least, not to me. This flight of fancy might just be a little more than that. (Highly unlikely, but bear with me, won’t you?)
Any fan of detective fiction would be familiar with Holmes and Poirot. Although following different approaches, ultimately it was after observing objects, situations and timing that they would, with unerring precision, solve the unsolvable . (In fact, that’s where Marple differed from Poirot. She relied on the archetypes of people that she had observed. Yes, I prefer Poirot, too.) What I am trying to arrive at, is how the evidence, the proof that determines a person’s fate, whether they’re guilty or not, was a matter of circumstances and physical, material evidence. (Kind of obvious, I know.)
Now consider an aphorism that we’ve probably heard a couple of times. Clothes make a man. Yet again, material objects are somehow linked to making or breaking someone. Sure, one must not take aphorisms literally, but then again, another aphorism says there’s no smoke without a fire. What this long winded article is trying to convey is how Man’s (Forgive me, feminists, for I must stick with the literary conventions established by thos... You know what, forget that. Let’s redefine the conventional.) nay, how any being’s fate or destiny is increasingly being bound to objects.
One might argue that’s always been the case. I mean, no being can survive without food or water, those are objects, right? But that’s different from how you’re denied entry into a club, because your annual salary doesn’t meet the minimum requirement. How you can’t study at an institution of your choice, because you happen to have a passport showing you belong to a particular nation. Again, one might argue saying it’s not the object, it’s what they represent that are binding you.
But in that case, all objects exist to serve a particular purpose. Even something as mundane as a rock can serve the purpose of being someone’s toe stubber or another’s murder weapon or even my example of an object that has purpose in this article. So if it’s the objects that are determining the path for people, why do the people themselves exist? To serve as a medium of interaction for these objects? Maybe the objects exist in an alternate dimension and this physical manifestation of theirs on this plane needs us to interact. (Still a better reason for the origin of humans than Scientology, don’t you think) While that’s a theory I believe is worth looking into, the real question is whether there’s maybe something wrong with what’s happening.
I mean, this is quite literally the objectification of people, reducing them to their belongings, documents and circumstances. While it’s essential to certain professionals like doctors (Who reduce patients to signs and symptoms. Then reconstruct them while treating them) or detectives (Refer to the fictional detectives’ example.) or even Indian movie fans (Because of item songs.), the fact that I saw the pots and was more curious about what they contains than the man himself in the picture, is proof that something’s not quite right. (Well, with me, at least.)
Ultimately, if the next time you’re on the street, you see a desperate college graduate seeking a job and not a bad tie coupled with sweat stains, it means that you are fighting objectification. And you can reduce everything wrong with this world to objectification. Terror, sexism, poverty. All have objectification as their root cause. Heck, why do you think I wrote this article? To make a difference?
Or for the money? You decide.