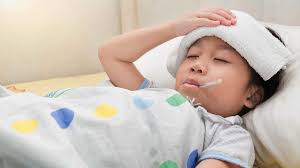 A lot of diseases are common during childhood ,we will discuss about symptoms and cure of these diseases.

Chickenpox is a common and mild childhood disease.Symptoms of the disease are

Fever,rash, itchy spots which turn into  fluid -filled blisters  which later turn to scabs which eventually fall off.

Fever and itchiness cause a lot of discomfort and makes a child irritable.

The incubation period is 10-21 days

No specific medicine is there to treat chickenpox, only paracetamol is used to lower fever and calamine lotion to soothe the skin.

Immunisation can help prevention of the disease.Varicella Vaccine if administered helps to prevent the disease.

COUGHS,COLD AND EAR INFECTIONS  IN CHILDREN:

In children cough is common caused due to a cold.If the cough becomes nagging and doesn't go away it may be due to-

Sore throats are caused due to viral illness caused due to cold and flu.The child's throat becomes sore for a day or two before the commencement of a cold. Paracetamol or Ibuprofen can be given to relieve throat ache.Sore throats go away after 3-4 days but if swallowing becomes difficult doctor should be consulted.

Fluid intake of the child should be increased

Fever can be controlled with Paracetamol

Hygiene should be maintained

The Influenza Vaccine should be administered yearly to the child to get protection from cold and flu.

They are common in babies and small children following a cold.Sometimes due to an ear infection fever might crop up which can be controlled with Paracetamol.No ear drops should be put in the child's ear without the doctor's advice.The infection goes away in two weeks.

Repeated middle-ear infections may lead to Glue Ear(Otitis media with effusion) due to which sticky fluid builds up and can affect the child's hearing.Immediate medical attention should be sought.

DIARRHEA AND VOMITING IN

Diarrhoea occurs in infants and small children too due to unhealthy food or contaminated water.

Medicines should be given immediately to prevent dehydration.

Symptoms of diarrhoea and vomiting are--

Sunken eyes,dark urine and a dry mouth are symptoms of the disease.

If the child has fever, green vomit,blood or mucus in the poo and abdominal pain then the child needs urgent medical care.

It is a contagious viral disease spread from person to person through air droplets.

Symptoms are-fever,cough,cold,lassitude,sore throat,watery eyes,rash appears on the 3rd or 4th day.Spots are red and raised.Illness lasts upto 10 days.The child should be isolated from other children.

Prevention--Vaccination is the best way to prevent measles

A contagious viral infection of children from 5-15 years.But in the present day it has become uncommon due to proper immunisation.

Symptoms---painful swellings appear  at the side of the face under the ears giving a 'hamster face'appearance.Headache,fever and joint pain are the other symptoms.

Prevention is with the MMR vaccine.

FEVERS AND HIGH TEMPERATURE IN CHILDREN-

Mild fevers to high temperatures are common among children.If the thermometer shows temperature above 98.4'F then the child has fever. Mostly the fever is due to viral infections but sometimes it may be due to bacterial infections which requires a course of antibiotics.

If the child shows listlessness,having seizures,difficulty in breathing,not passing urine and a severe headache then the child should be hospitalized immediately.

Cover the child and give the child lots of fluids to prevent dehydration.

Paracetamol and Ibuprofen are best to reduce fever.