We All are Marked: Harry Potter's Scar/Mark 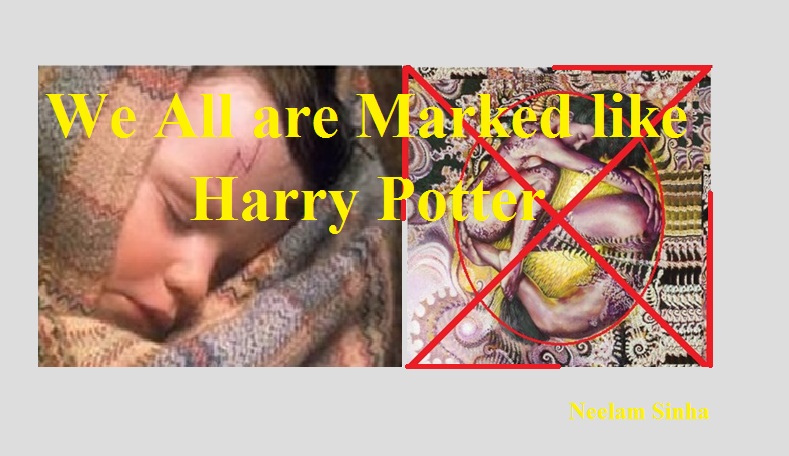 We All are Marked: Harry Potter's Scar/Mark

“ A co-incidence or a deliberate attempt?”

A scar on Harry Potter's forehead in the shape of a lightning bolt is the result of a failed murder attempt by Lord Voldemort on 31 October, 1981, when he struck 15-month-old Harry with the Killing Curse.

———(Notice: marked during attempt of killing)

4 And the Lord said to him, “Pass through the city, through Jerusalem, and put a mark on the foreheads of the men who sigh and groan over all the abominations that are committed in it.” — Ezekiel 9:4

However its New Testament scriptural basis comes from Revelation that three different times mentions that believers will be marked on their forehead.

3 “Do not damage the land or the sea or the trees until we put the seal on the foreheads of the servants of our God.” — Revelation 7:3

4 They were told not to harm the grass of the earth or any green plant or any tree, but only those people who do not have the seal of God on their foreheads — Revelation 9:4

14 Then I looked, and behold, on Mount Zion stood the Lamb, and with him 144,000 who had his name and his Father’s name written on their foreheads. — Revelation 14:1

——(Notice: marked because… not being killed)

Touched means Marked here so BRAN IS ‘MARKED’ BY LORD OF DEAD WALKERS.

——-(Notice: marked during attempt of killing)

given by DARKEN RAHL, WHO IS LORD OF DARK WORLD in this fiction.And Latter Richard comes to know that Darken Rahl is actually his father. Thus he becomes Richard Rahl: Son of Darken Rahl,… A Basterd son Actually.

——(Notice: marked during attempt of killing)

. ‘There is a black spot on the moon,…
Because freely wandering moon, once was part of Earth,
…And though it is free but handcuffed to earth.
And so, we are ‘MARKED ONE’.
Because,… Though we are Homo-sapiens,
… But we still are one from the animals… just ANOTHER EARTHLING,
…Handcuffed to come back Home! …
So, no arrogance,… ‘O THE MARKED ONE, THE MORTAL BEING!’

——(Notice: marked because destined to be killed/dead for, Being a mortal -being)

“ HERE I USED ‘MARKED ONE’ TO SHOW THAT WE ARE JUST ANOTHER EARTHLING like other earthlings called animals.And incidentally the meaning is strikingly similar what is used in Fiction book ‘Stone of Tears’ .

BUT IN THE “ Ezekiel 9:4”,… It is saying/means that ‘MARKED means ESCAPED ONES from Mass Psychosis are HUMAN’ and those who are killed means following as animals of herd, they can do anything to fulfill their basic instincts as animals do.

And the Lord said to him, “Pass through the city, through Jerusalem, and put a mark on the foreheads of the men who sigh and groan over all the abominations that are committed in it.” — Ezekiel 9:4

[Note: over all the abominations, the sighs and groans only humans do ]

So, the(1) mark used in Harry Potter and (2)Mark used in Stone of Tears and(3) Mark used in Ezekiel 9:4 and (4)Bran of Game of Throne is touched by “MAKED BY LORD OF DEAD WALKER.’ and(5)mark on moon … all take us to something deep…related to our existence.

The Life of Human is equivalent to ‘Immortal’=Ezekiel 9:4.

Though we are Marked = Mark used in Harry Potter/Mark used in Stone of Tears/Bran of Game of Throne is touched by “MARKED BY LORD OF DEAD WALKER./The Mark on moon.

So, should be take :

And We know it that we compare a Female to Moon.

...And as because right or having own name is denied to woman(a woman is known by/is property of father or husband that is male so all their deeds belonged to man. Thus Krishna or Christ as we know are recognized as male and women behind veil.

Next marking goes to

And A Mark means next to be killed as we see in [2008 movie ‘Wanted’] Director: Timur Bekmambetovwhere all are marked.

Woman means a being who is striped off from all rights(Krishna was not called a king like Ram, so Christ was not given kingdom)

[Because we are Homo-sapiens, another Earthling like other animals,… so we are marked ones= a mark is a black spot on the beautiful moon]

AND IT GOES AS INFINITE for, life is eternal…Thus it’s called Sanatan -dharma

For, The throne of human is eternal and intact among all living beings = Krishna/Christ Reborn.

Tags: NS We All are Marked