let's meet with the new creation of chetan bhagat 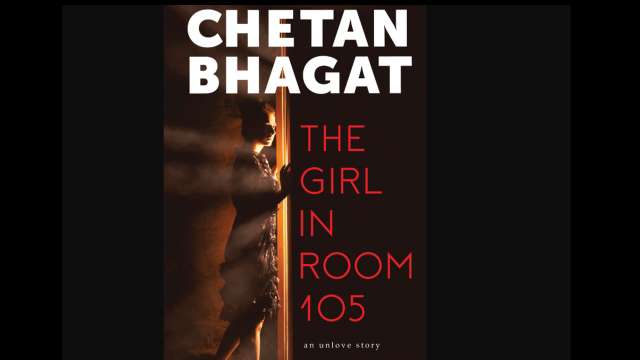 Celebrated author Chetan Bhagat on Monday launched the trailer of his new upcoming book, titled "The Girl in Room 105: An Unlove story".The trailer of Bhagat's highly-anticipated novel was released along with its title and cover via Facebook Livestream here in Mumbai.

"This time I have departed from the typical Chetan Bhagat love story. It is an unlove story. I think love is great -- I may have pushed it too much -- but sometimes in life you have to unlove... we all have (had) situation where we have to unlove someone.

"It is a movie-style promo. Such promos for books does not exist, I have to again and again explain to people that you have to read the book to figure out what happened... because the joy of books is something else," said the author during the launch.The trailer suggests a plot about a boy called Keshav Rajpurohit from a conservative family, who faces an unexpected turn of events when he goes to visit his ex-girlfriend Zara Lone, a Kashmiri Muslim, in her room.

Read the excerpt below:

On board IndiGo flight 6E766 HYD–DEL

‘Fasten your seatbelts, please. We are passing through turbulence,’ the flight attendant announced.

Eyes shut, I fumbled to find the belt. I couldn’t.

‘Fasten your seatbelt, sir,’ the flight attendant personally reminded me. She looked at me like I was one of those dumb passengers who couldn’t follow simple instructions.

‘Sorry, sorry,’ I said. Where was the other end of my belt, anyway? My head hurt from a lack of sleep.

I had spent the whole day in Hyderabad at an education conference and was on the last midnight flight back to Delhi.

Damn, where the hell was my buckle?

‘You are sitting on your belt,’ the person next to me said.

‘Oh, stupid me!’ I said, finally clicking my belt shut. My eyes still refused to open.

‘No service at the moment—because of the turbulence,’ he said. ‘Going for an event?’

‘Returning from one,’ I said, somewhat surprised. How did he know?

‘Hi, I am Keshav Rajpurohit.’

We passed through angry clouds. They didn’t like this hard metal object disturbing them. The aircraft rattled like a pebble in a tin. I clutched the armrests, a futile search for stability at thirty-eight thousand feet.

I breathed deeply through my mouth and shook my head. Relax, it’s going to be okay, I told myself.

‘Isn’t it amazing? We are in this big metal box floating in the sky. We have absolutely no control over the weather. A strong gust of wind could rip this plane apart,’ he said in a calm voice.

Half an hour later, the weather had calmed down. The flight attendants resumed cabin service. I ordered two cups of coffee for myself.

‘No coffee. Do you have plain milk?’ he said to the flight attendant.

Where did he think he was? A dairy farm? And how old was he? Twelve?

I gulped down my first cup of coffee. I felt like a phone with low battery that had finally met a charger. I rebooted, at least for a few minutes. I noticed the nightsky outside, the stars sprayed across it.

I turned at an angle to look at him properly.

A handsome face with striking eyes, deep and brown. They looked like they had seen more life than a man his age, which I guessed was around mid-twenties. Even in the dark, his eyeballs gleamed.

‘I am addicted to this stuff,’ I said, pointing to the cup. ‘Not good.’

‘Worse things to be addicted to,’ Keshav said.

‘Love.’ This time he whispered.

I laughed so hard, coffee spilled out of my nose.

‘Deep,’ I said, and patted the back of his hand on the armrest. ‘That’s deep, buddy. I guess coffee isn’t so bad then.’

He ran a hand through his hair—which he wore short, in a military crew-cut—and touched the gold stud that glinted in his left ear.

‘I am from your college.’

‘You just reminded me how old I am,’ I said. Both of us laughed.

‘Actually, I might have a story for you,’ he said.

‘Oh no, not again,’ I blurted out, and then kicked myself mentally for being so blunt. Exhaustion had made me forget my manners.

‘It’s fine,’ he said and rubbed his hands together. ‘Wrong of me to presume you would want to listen to it. I’m sure people come up to you all the time.’

‘Sometimes they do. But I didn’t have to be obnoxious. Sorry.’

‘It’s okay,’ he said. He stared at the seat in front of him.

I shut my eyes. I wanted to sleep, but couldn’t. The overdose of caffeine and guilt prevented me from dozing off.

I opened my eyes after twenty minutes. Keshav was still staring at the seat in front of him.

‘Maybe I can hear your story in short,’ I said.

Of course, I feel obligated, dude. Especially if you sulk and don’t make eye contact.

‘Listen,’ I said, ‘here’s the thing. You said addicted to love. So, it’s probably a love story. I am tired of love stories. Really, another Chetan Bhagat love story? Such a cliché now. I want to write

something else. Not just about two people pining away. Who does that these days, anyway? Nowadays, people don’t fall in love. They swipe left and right…’

‘It’s not a love story,’ he said, interrupting my blabber.

‘Really?’ I said, one eyebrow up. ‘And can you please look at me when you talk?’

He turned to face me.

‘Ex-lover? You guys broke up?’

‘Let me guess. She broke up. And you still loved her? Wanted to get back?’

He shook his head.

‘I am tired. Mind if I rest?’ he said. He leaned back on his seat and down came his eyelids. He actually went off to sleep. Damn, you never do that to a writer. You don’t make him take late flights, pump him up with coffee, start telling a story, and then snooze off at a cliffhanger.

I had to shake him by his shoulder.

‘What happened between you and her?’

‘So, tell me what happened.’

‘For that I have to tell you the full story, Chetan.’

‘You don’t have to. As I told you, this is not really a love story. You can always write another cute boy–cute girl romance. Half or quarter girlfriend types.’

I ignored his sarcasm.

‘Just tell me the story. I want to know what happened between you and Zara Lone,’ I said.

Published by Westland Books, "The Girl in Room 105: An Unlove story" will hit the stands on October 9 and is available on Book stores.