Whatever happens, happens for the best, Really? 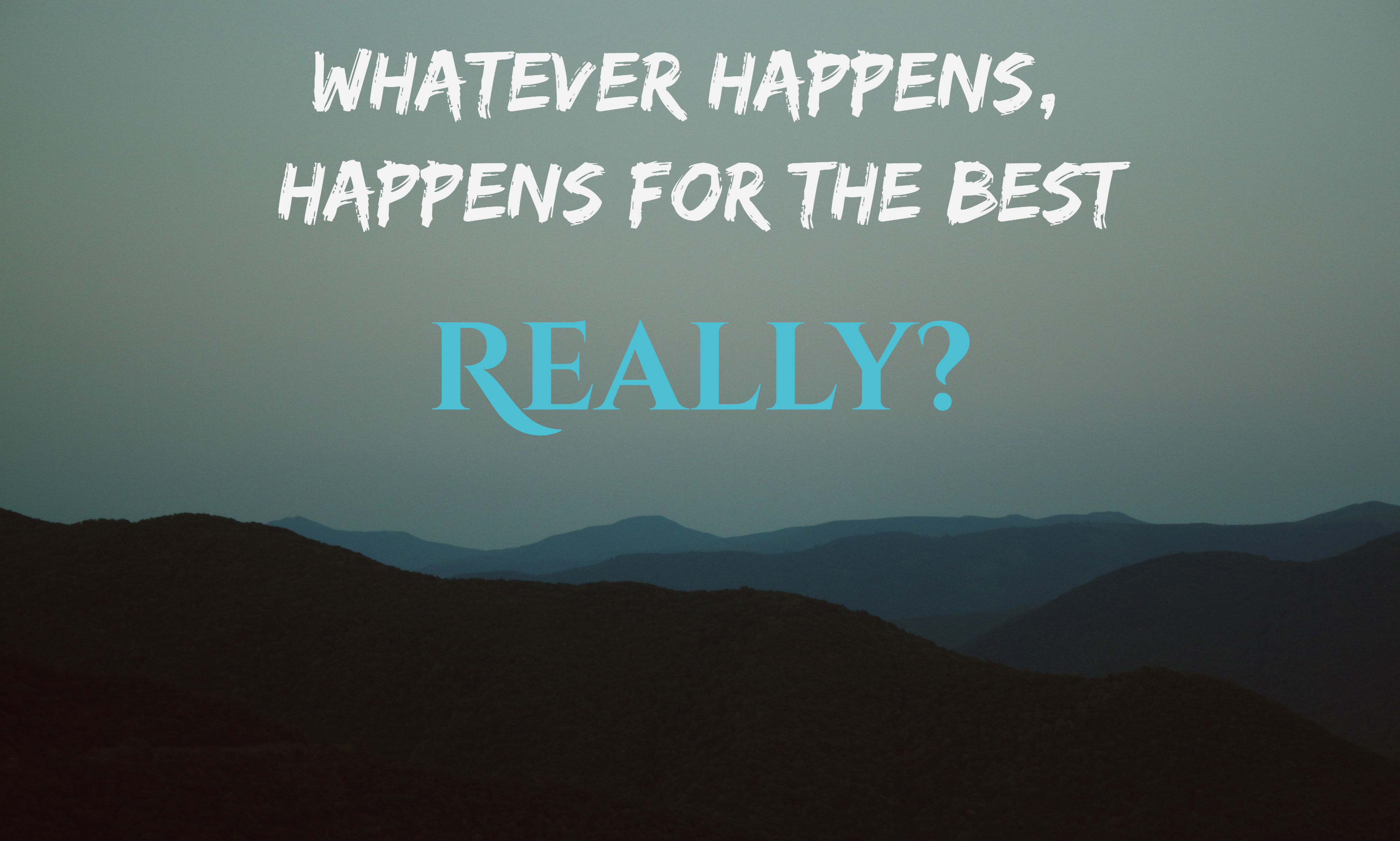 The world we are currently living in is full of chaos, a fusion of different people and moreover ambiguous conscience over something. Once the human being gets that level of maturity, it thinks about reaching the pinnacle of the success. The success, of course, could differ from person to person. If for me it is happiness, it can be money for someone else. But the definition of the humanity cannot be differentiated. It was, is and will always be the same despite the prophecy of the situation. The people nowadays have become really pretentious, they never appear what they really are and that is the reason you won't be able to understand them completely. Well, not everyone is the same, if one is optimist then there must be someone with pessimistic thoughts. Like there is a light and darkness and love and hate. I have heard people and even my mom and I am sure you guys must have heard a saying that “Whatever happens, happens for the best.”

I believed it throughout my upbringing and it certainly worked for me, I left my BPO Job for the best as I was fond of writing more than giving services to customers. It did happen for the best. There are many such situations to explain and to perceive that whatever happened, happened for the best. But last night, when I was going through the news feed, there was one news that held my attention, made me read it to the fullest. Well, I read it and when it ended, I had a question to myself – “Was it a mirage?” Had I been told nothing but a lie since I was a child? We will come to the analogy of the news and discuss that later but before that, I want you to read a story.

A family is what that spends quality time together. Is that what happiness is? Obviously, it is. But the moment becomes ecstatic when you get that one thing you were yearning for periods. There were parents whose happiness went beyond an extent after having an angel like daughter in their life, she was the most beautiful child in the world, that is how the senses of parents process. You are the best in the world to them. They waited for so many years to have such a beauty in their life and finally, the patience paid off. Whatever happened, happened for the best. The girl was lovely, she was beautiful, intelligent, good at studies and her smile was enough to wipe out the tears of anyone.

One day while going to the tuition classes, the girl went missing. Like any other parents, her parents got concerned about her. They try to look for her at every possible place but all was in vain. Later on, the body of the girl was found in a garbage. After an autopsy, it was confirmed that she had been raped and stifled to death. The autopsy also revealed that she had been tortured before her murder. The man who was involved in this heinous and monstrous crime got arrested afterward and all went normal as how it does. But did this change anything? This was the news which I had read that day. I just told you this through a story.

When I finished the news, I don’t know what happened, how this thought entered my mind and I was like “Does whatever happen, happen for the best”? Like really. The very first time, this statement appeared perfidious to me. There were few questions in my mind and I was looking for a person (I don’t know whom) to ask “What was her fault?” “Why she got afflicted by all this”? “Is this a justice”? Did she commit a crime being born as a girl? “Should the man had taught the right way to give out his perversion”? How could that be halted?

But sooner or later I realized that there are trillions of cases like this in India and our life has become so hectic that we do not heed such movement. The girl is dead so is humanity. The question is not how the man can be so sick and skanky. The question is can we do anything to put this to halt. When I was a kid, I was taught that helping the one who is in need is humanity, offering a bread to the starved is humanity but I was never taught that standing for the wrong is also humanity. Protecting the one who is suffering because of no reason is humanity.

I want you all to reread this story and try to understand and if you able to do it rightly please also let me know how this happened for the best. By adding up all the possibility and exceptions, still, the statement would never be able to give me justification. I am a strong person and I literally cried after reading the news. Till now you all must have understood whose story it is and if not let me tell you that this is the story of a lovely 7-year-old girl "Zainab Ansari." Yes, the girl you have seen smiling in her favorite bright pink coat, she is the one. This is the girl who became the victim of this outrageous praxis. The smile of the girl can easily tell you how profound her thoughts were, how she was expecting the world around her to be good but the happy world betrayed her. This crime unleashed a wave of revulsion around Pakistan. After this, an enormous number of prominent Pakistani women came forward to tell their own stories of sexual assault and exploitation.

There are many such stories to unleash and it would take a decade to uncover all those hidden stories in whom the victim has not spoken because of the abashment. In every second, the humanity is getting naked in those tranquil streets. Should not we come forward and cover it up? Should not we give hope to all the girls out there by standing with them? We all are very much aware of how the society has become nowadays. This rape praxis is raising up every day because we have zipped out our mouth. Despite this, no parents want to educate their child because for them it is a taboo to talk about sex. This is not how our culture works? Right?

But everyone wants justice afterward. Open your mind, see the world and make the right decision for your child. The food, the clothes, and the society is not actually the reason. The antagonist is the mentality. The mentality of what we get by fighting back, the mentality of condolences for girl child born. Break the stereotype and emerge as a new person. Wake up the humanity inside you. It is you who can change the world and no one else.

“The beauty dwells in your eyes

Because the world is still a web of lies

You never got a chance to emerge

We were the one to put the purge

You can still breathe in the same world

You just need to wake up and let yourself unfurled

It is still not late yet, bring out the insanity

Create a splendid world with full of humanity”